Several seasons ago, an Arkansas pond owner invited me to his getaway home to sample the fishing on his small lake. My wife and I and angling buddy Brad Wiegman spent an afternoon tangling with the pond’s unique fish mix with fly rod and spinning tackle.

Yes, we caught the usual largemouth bass and bluegill, but what really made that pond’s fishing unique was the mixed-gene members of the pond’s populationâ€”hybrid stripers and hybrid sunfish.

Of course we enjoyed the fight and strength of the hybrid stripers. But the real charmers were the hybrid sunfishâ€”fat, colorful and a bit different.

Hybrids of many stripes and colors

The sunfish family breaks lines of species segregation more frequently than most fish families. Those who study the dynamics of these fish populations tell us that some mix of bluegill, pumpkinseed, longear sunfish, green sunfish or other sunfish many of us have yet to meet happens with inestimable frequency.

“You find natural hybridization occurring in most every lake that has a mix of sunfish species,” said Herman, co-owner of Herman Brothers Lake & Land Management, based in Peoria, Illinois.

According to Herman, redear mix frequently with bluegill when there’s limited access to spawning areas.

“That happens a lot, and it is probably the most common cross,” he said.

But the green sunfish is the species driving the most interest among fisheries managers today. Many lake and pond owners are adding hybrid bluegill/green sunfish to their waters with favorable, if not spectacular, results.

Contrary to popular belief, however, hybrid bluegill/green sunfish are not sterile. They are perfectly capable of producing offspring. Still, lakes stocked exclusively with them show poor reproduction.

So what’s the problem?

“About 97 to 99 percent of these hybrids are male,” Herman said. “With only one to three out of 100 being females, the males have few eggs to fertilize. And the offspring of two hybrids is an F2, which does not have nearly the potential of the F1 generation, the initial cross. And three to four generations down the line, they lose the bluegill characteristics and are pretty much back to being green sunfish.”

To cross or not to cross?

But the hybrids grow big and handsome, don’t they? And they won’t overpopulate as bluegill or crappie do in the absence of a sufficiently large predator population.

True on both counts. But Herman urges caution. Hybrids are perfect for “a lot of action and meat on the table,” he says.  But he advises lake owners and managers to think about their fishery’s goals before stocking hybrids.

“I never recommend stocking hybrid sunfish in a lake unless you are providing supplemental feeding,” proclaims Herman. “They have bigger mouths than regular bluegill, so they will outcompete young bass and bluegill for food. Furthermore, they don’t reproduce enough fry to provide forage for the pond so they mess up the predator-prey relationship.”

In summary, without supplemental feeding, hybrids may win you the negative trifecta:

“Grow ’em and eat ’em. That’s the purpose of hybrids. Otherwise they only compete and take food from your bluegill and other fish in the pond,” Herman said. “The marketing hype for hybrids and what actually happen in your lake are two different things.”

He points out that the state record hybrid sunfish is smaller than the record bluegill in every state. 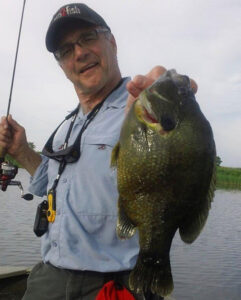 Now I did catch my largest sunfish ever at Nate Herman’s home lake while researching this feature â€“ a fish estimated between 1.4 and 1.7 pounds. So hybrids can and will grow large. But this slab was very “un-bluegill-like” in that it hardly fought at all! It was clearly near the end of its life cycle.

“They grow fast to about a pound, but they max out early and only live about five to six years,” says Herman. “In contrast, a normal bluegill will lie six to eight years, depending on the body of water, diet and geographic area. As a general rule, the faster fish grow, the shorter their lifespan.”

The fact that Herman stocks hybrids in his home lake and has added them to other waters as well shouldn’t cloud his point. Keep in mind Nate’s initial premise: stock hybrid sunfish only if you can consistently provide supplementary feeding â€“ in his case, a highly nutritional pellet supplement of his own special blend.