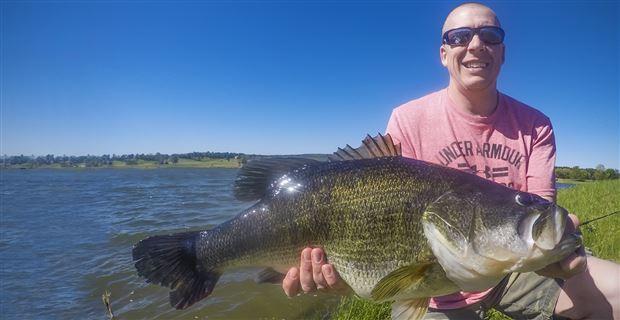 Whether you bank fish ponds by choice or necessity, they’re excellent places to find huge bass. I’ve managed a lot of ponds—it’s a nerdy hobby of mine—and I’ve actually had more success catching my biggest fish on completely barren banks. Of course you’ll catch ‘em on the juicy-looking stuff such as laydowns, stumps and vegetation lines, but my most memorable catches often come in the most boring parts of the pond.

I’ve thought about this for a long time and even shared some conversations with biologists. The reason behind this phenomenon is simple: It’s all about the break lines.

Let’s delve into why they’re so darn effective.

Just as reservoir-dwelling fish use creek and river channels as edges by which to travel, pond fish also utilize break lines for similar reasons. There may not be much seasonal migration occurring in these smaller ponds, but the largest and smartest pond bass understand one very important concept.

Every living thing in that pond uses these break lines en route to shallow-water feeding opportunities. If that bass sets up shop along this common route, it has an opportunity to easily intercept its prey before it reaches the shallows.

Think of it like this: Where is a police officer going to radar for speeding drivers? They’ll often position themselves near the highways with the heaviest traffic in order to maximize their chances of catching offenders. That’s exactly what these big pond bass are doing—they’re putting themselves in a high-percentage situation in which they can feed while exerting as little energy as possible.

Why would a big bass fight a bunch of 12-inchers when it wants to feed? That’s not a very efficient way to use its energy reserves. It’s well documented that many of your larger bass will avoid feeding competition at all costs.

A lot of ponds throughout the country are fairly void of cover. You’ll see some isolated laydowns or stumps which can be great for catching numbers of bass, but it can be hard to find trophy-sized bass in these areas. If it looks so good, how in the world can there not be a big one on it?

Isolated cover like we’ve discussed tends to concentrate bass; they have to go somewhere, so they’ll get on this cover in astonishing numbers. This creates competition and as earlier stated, big bass don’t want anything to do with it. 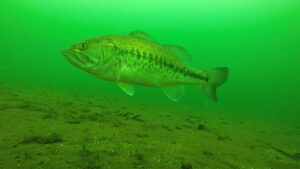 Instead, they’ll use break lines. They may not get the abundant feeding opportunities they would around that isolated cover, but in many cases they’re willing to sacrifice. When that panfish or minnow crosses their path on a break line, they know it’s theirs for the taking. They don’t have to worry about fending off a bunch of pipsqueaks before claiming their meal.

Think of it like this: My 64-year-old dad will not, under any circumstances, wait in a line at a restaurant; even if it’s a 5-minute wait at his favorite place, he’s already making plans to go somewhere else. He’d rather go to a worse restaurant with no wait than fight a crowd. Big pond bass are just like my dad. They’ll let the 12-inchers do all the fighting while they slide out to a nearby break line, unbutton their pants and prepare for a nice, quiet meal.

Both biologists and bass fishing professionals say it until they’re blue in the face: Big bass crave quick access to deep water. The same thing is true when you’re targeting pond bass. These smaller bodies of water are a microcosm of larger reservoirs.

Break lines give pond bass the best of both worlds. They’re able to quickly slide up to the shallow shelves when it comes time to feed, but they can also easily move to deeper water when weather fronts or other environmental changes occur.

This especially rings true in the warmer months. Because ponds are small by definition, the water will get much hotter than it would in a larger reservoir. When summer oxygen breakdown occurs in the deeper depths of ponds, the bass have to position above the thermocline—a temperature-related level at which the lake stratifies—if they want to survive.

Break lines allow the bass to suspend at a comfortable, oxygen-rich depth while giving them a level of protection from predators. They’re loners, so they can choose a section of break line and essentially “own” it while enjoying the practical acclimation benefits it offers.

On your next pond fishing outing, make sure to saturate nearby break lines. Make long, 45-degree casts from the bank in order to maximize your bait’s time in the strike zone and hold on tight. You won’t get a ton of bites, but I’m willing to bet they’ll be good ones.