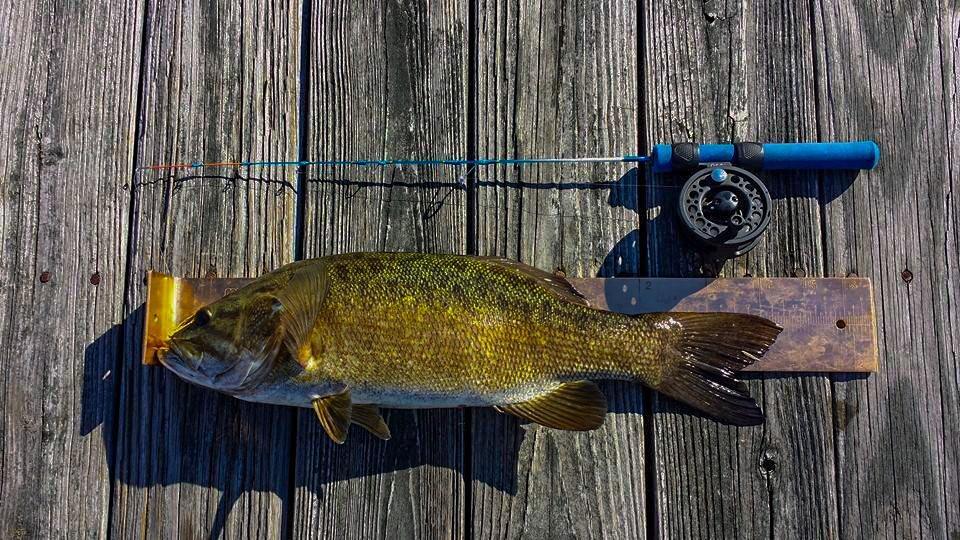 Ice fishermen often rely on the smallest of offerings in order to jig up lethargic bass through hard water, yet many bass fishermen snicker at the notion of utilizing ice fishing tactics while angling from their boats or docks on open water. At first glance, ice jigs appear to have little appeal. It seems impossible for a tiny piece of metal, nearly absent of action, to produce quality bass, but those who refrain from skepticism and give them a fair shot while there’s still open water will be awarded with some surprising results.

As bass migrate to their wintering areas and school up, many anglers prefer to target them with various vertical presentations. Vibrating blade baits, such as the “silver buddy,” and the drop shot rig are just a couple of cold water go-to’s, but ice fishing jigs also deserve a place in every northern angler’s tackle box during the cold water months. Where they differ from most presentations is their unique action (really, a lack there of) which makes them irresistible to sluggish bass seeking an easily captured morsel. Any time the water temperatures dip beneath 50 degrees, ice fishing tactics will often produce more action than more popular methods of bass angling, as their subtle action proves to be far more realistic in cold water situations. 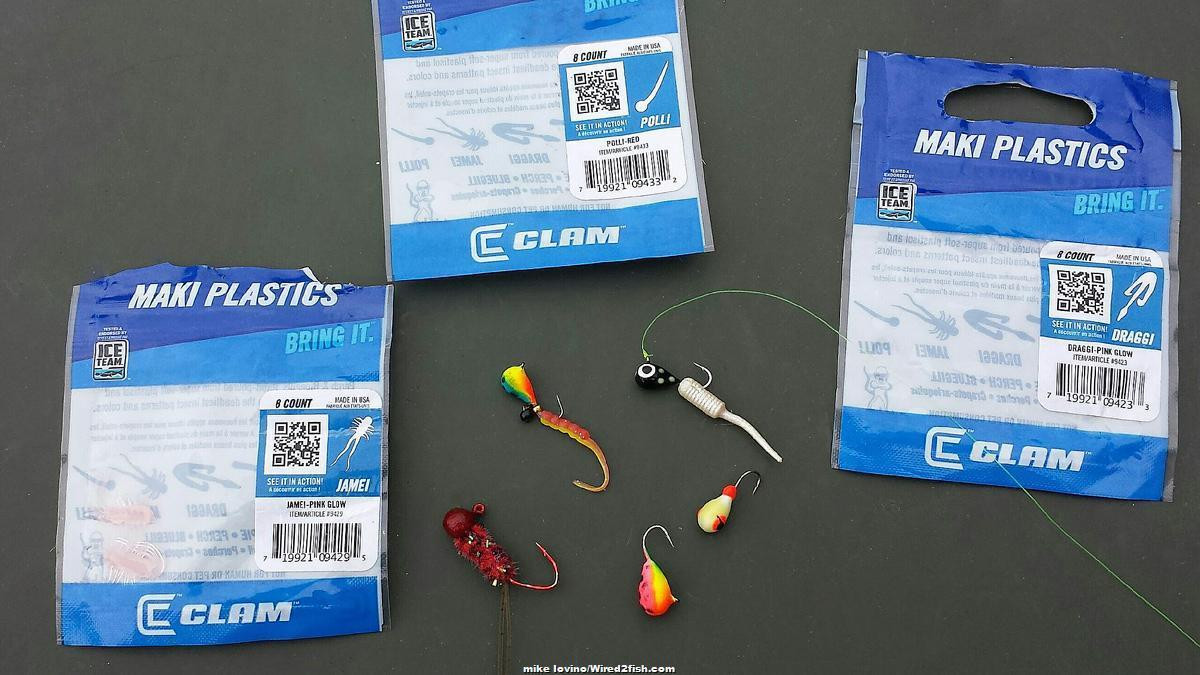 Where to try it

Wintering areas such as main lake basins, rocky humps with steep drop offs, and deep wood cover are ideal locations to vertically present ice jigs. Northern Largemouth and Smallmouth both complete their migrations to wintering areas prior to ice forming on the water. The major move occurs when surface temperatures dip below 55 degrees, which typically occurs in late October or early November in most northern states.

Ice jigs do not move very much water, making for a very subtly presentation. Due to their silent approach, they will produce greater results in water bodies with moderate to good visibility.

Though wintering areas are most likely only accessible by boat, fish can also be targeted utilizing ice fishing jigs by anglers with dock access, and, in some instances, from shore before bass make their push out to deep water. Clam Outdoors ice fishing pro-staff member, Michael Jasensky, jigs between boat slips at his local marina for trophy smallmouth in the early fall months utilizing extremely light line and micro ice jigs.

“I’ve found that vertical jigging small tungsten jigs I would normally be using through the ice far outperforms typical cast and retrieve methods,” said Jasensky, who admits he too was shocked when he first realized how easily giant smallmouth could be duped by a bait with such a small profile.

Right on the Mark

Since wintering fish school tightly, there will often be a ‘spot on a spot’ that anglers have to accurately target in order to get their jigs into the strike zone. Drifting even a foot or two in any given direction can be the difference between a skunk and a boatload.

While boat anglers can easily use their electronics to pinpoint these areas, dock fishermen do not have this luxury. To increase his odds of locating the motherlode, Jasensky uses the same Vexilar flasher he brings on the ice, dropping the transducer off the edge of the docks to monitor any activity below. 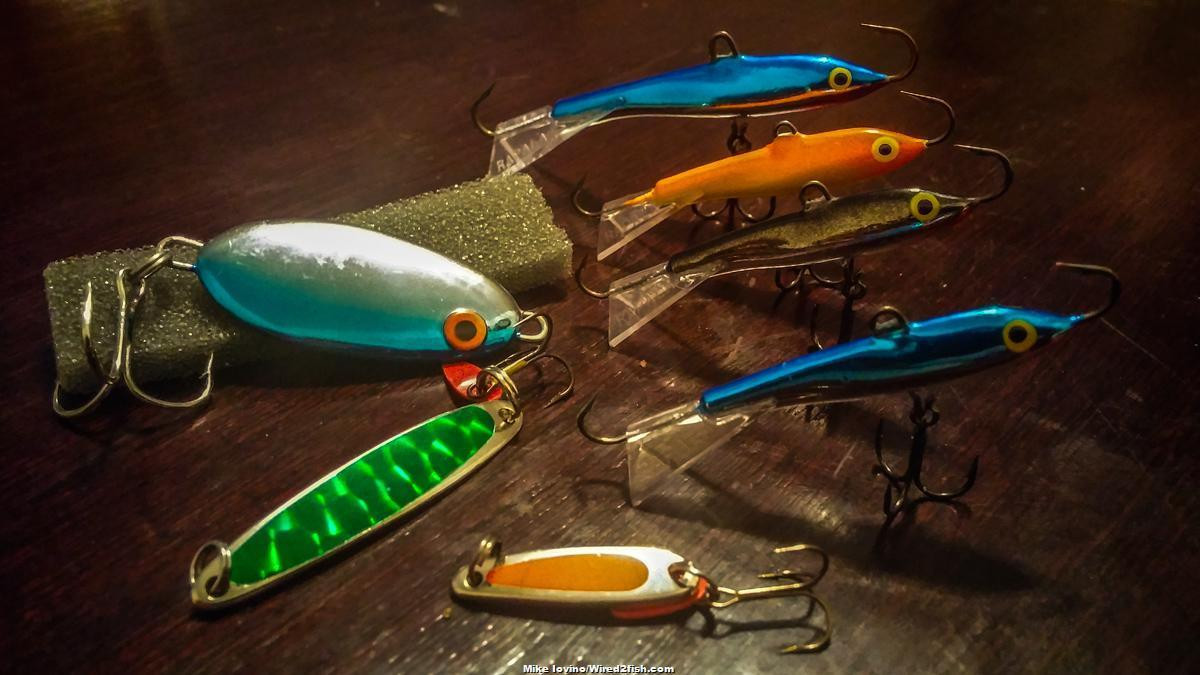 Whether using ice jigs on a dock or from the deck of a fishing boat, anglers’ tackle and jig selection should conform to the specific depth and cover they are targeting. 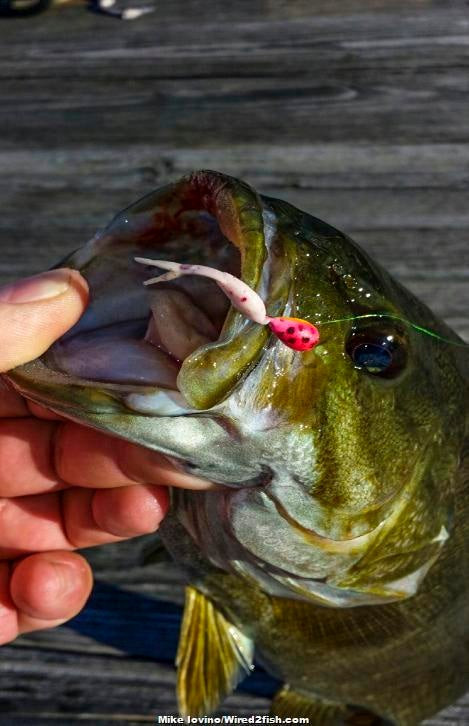 Any good ice fisherman knows how to achieve this ever-important action. Rather than sweeping or aggressively lifting the rod tip, “the bounce” imparts action in a jig without really moving the rod. In order to impart this action, anglers must allow the weight of the jig to put a slight bow in their rods, applying light pressure against the weight of the lure as to lift it off of the bottom ever so slightly. Repeatedly letting up on the pressure being held against the weight of the jig causes the bait to bob subtly just above the bottom, a motion which causes the jig to closely resemble a sluggish and unsuspecting baitfish.

Ice jigs appeal to nearly everything that swims. Slab crappie, jumbo yellow and white perch, bluegill, trout, walleye and even stripers can be taken on the bitsy baits. So get to bouncing around some ice fishing jigs before hard water sets in for some superb fish-catching action this winter.