Shallow bass fishing should never be overlooked in the winter months. Although you can have success targeting deeper bass habitat when the mercury drops, finding concentrations of shallow, more aggressive fish can pay big dividends.

Alabama angler and former College BASS Series champion Matt Lee has been known to have some monster days in shallow water throughout some of the year’s coldest months. While other anglers flock to deep river ledges, shell beds and rock piles, Lee dissects the shallows in search of giant coldwater bass.

When to go shallow

“I think there’s always a population of shallow bass,” Lee said. “Whether it’s the heat of the summer or the dead of winter, you can bet there’s a shallow bite somewhere. Even if they’re simply taking advantage of the warmer water temperatures up shallow and not necessarily feeding, they can be a lot of fun to catch.”

Before we explore the nitty-gritty of what to use and where to use it, it’s important to understand the prime times to target shallow bass. Cold, stable weather patterns can certainly result in a red-hot shallow bite, but Lee looks in the rearview when making his decision to fish for shallow winter bass.

“It’s important to look at the weather patterns of the past few days before committing to a shallow strategy,” Lee said. “The third or fourth day of a winter warming trend is an excellent time to target shallow bass. This part of the water column warms the quickest, resulting in an influx of bass in uncharacteristically skinny water. Even a one-degree change in water temperature can ignite a feeding frenzy.”

To capitalize on this phenomenon, Lee relies on five specific presentations that have continuously proven effective throughout his young career.

Shallow cranking is a well-known big bass technique in cold weather situations. Many anglers opt for slow, subtle presentations when the action slows, but in Lee’s opinion, shallow crankbaits can force lethargic bass to bite.

“In the early winter when the bass are primarily feeding on shad, I like to stick with shad-colored, wide-bodied crankbaits such as the XCalibur XCS Square Lip,” Lee said. “As the winter progresses and the bite gets tougher, I’ll start to use flat-sided crankbaits like the Bomber Flat A more often.”

Feeling spongy? Coldwater bass won’t always annihilate your crankbait. If your road slowly loads or it feels spongy, it’s a good idea to lean into it. Sometimes your biggest bass will feel like a hang-up.

“You have to be a little stubborn when you’re shallow cranking in the winter,” Lee said. “Multiple casts to specific pieces of cover are crucial because you need to irritate the bass just enough to entice a bite. You also want to use a slow, 5.3:1 gear ratio reel in order to keep the bait in the strike zone for as long as possible. I’ll even slowly drag the crankbait like a worm so a slow-moving bass has time to catch up to it.”

The success of stick worms in shallow water is well documented, but anglers tend to forget about it in the colder months. This is a big mistake, according to Lee. The simple, subtle profile of a stick worm can load the livewells in a hurry this time of year.

“In the winter, you want a bait that doesn’t have too much action,” Lee said. “I’m not looking for big appendages—I want a streamlined profile. The Yum F2 Dinger is tough to beat in the winter. It doesn’t overpower the bass and it works in any kind of lake. You can throw it around any kind of cover all around the country.”

There are three rigging options he considers in cold water. 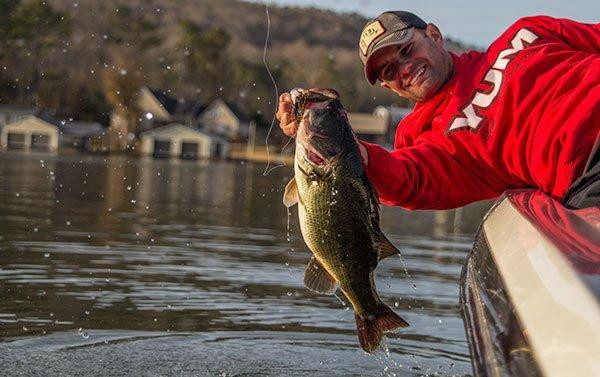 Jigs catch big fish and that holds true this time of year. If you’re catching good quantity but lacking quality bites, it’s a good idea to stick a jig in your hand and pick apart shallow cover with deep water nearby.

“I like to use a jig with rubber in the skirt when it gets cold,” Lee said. “I primarily use the Booyah A-Jig and the Booyah Pigskin Jig because the skirts have a lot of bulk but don’t create too much commotion in the water. I stick with a lot of brown, blacks and blues in cold water situations, but it’s extremely important to pay attention to any crawfish the bass are coughing up. That’s a great way to hone-in on a very specific bite.”

Line selection is critical: Lee uses fluorocarbon line when targeting shallow bass in the winter. He uses 14-pound Silver Thread with a stick worm and jig, 12-pound line with a crankbait and spinnerbait and 10-pound line with his jerkbait.

While it can be good practice to use a heavier jig around shallow cover to draw reaction bites, Lee tends to prefer the slowest fall possible when targeting inactive bass. They’ll often tuck into cover and look upward, which puts a slow-falling jig right in their wheelhouse.

“It’s all about being slow right now,” Lee said. “Whether you’re talking about the jig’s fall-rate or how you present it, it needs to be a deliberate, unhurried approach. I’ll drag and hop the jig as slow as I possibly can while using a pork trailer or a Wooly Bug—something that just glides behind the jig. Try to use the lightest weight you can use while still maintaining bottom contact.” 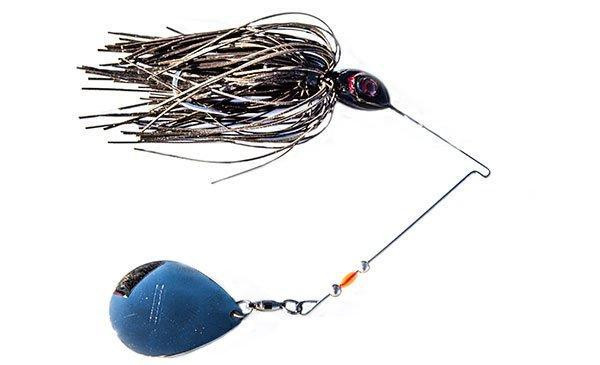 You don’t hear of many people using spinnerbaits in cold water, but that might be what makes it so effective. Shallow bass can become accustomed to seeing certain presentations and using a big spinnerbait can throw them a big curveball.

“A 1/2-ounce Booyah Blade with a single Colorado blade can catch some absolute giants in the wintertime,” Lee said. “A lot of fisheries tend to get heavily stained from all of the winter precipitation and a big spinnerbait moves a bunch of water, allowing the bass to locate it with their lateral lines.”

Watch for tight lines: Lee keeps a close eye on his Lowrance unit and looks for tight contour lines. These are indicative of steep drop-offs, which give bass the ability to easily feed in the shallows and slide back to deeper water.

You might catch a few bass here and there simply fan-casting a big spinnerbait, but similar to the crankbait, it’s important to make yourself slow down and fish very methodically. If you think you’re fishing it slow enough, you should probably slow down some more.

“I’m going to fish a big spinnerbait as slow as I possibly can,” Lee said. “I want to barely feel that big blade kicking because even though the bass are shallow, they may not swim a great distance to eat it. If I’m in particularly dirty water, I’m going to use some sort of dark color so the fish can profile it a little easier. In stained water conditions, I’ll use a chartreuse skirt more often than not.” 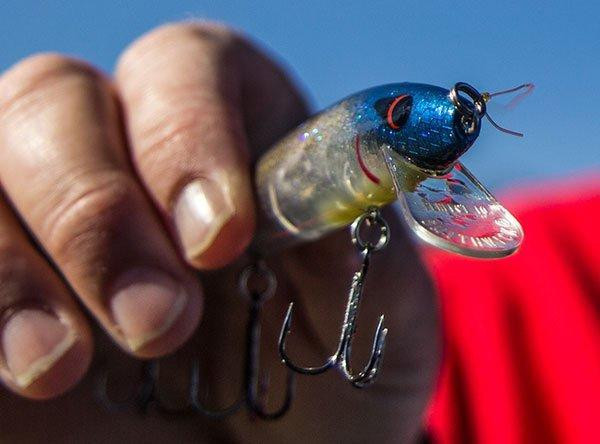 When the water reaches the low 40-degree range, it’s no secret that a jerkbait is incredibly effective. Instead of targeting suspended fish near break lines, however, Lee targets very shallow cover in hopes of fooling a giant.

“The Smithwick Suspending Rattlin Rogue is a killer jerkbait when you’re trying to catch shallow bass throughout the winter,” Lee said. “If I run through an area and catch a few stragglers on a crankbait, I’ll go right back through with a jerkbait and clean ‘em up. It lets the more inactive fish get a better look at the bait and keeps it in the strike zone.”

3 rods to cover your bases:

The length of pause is totally dependent upon the mood of the fish. While some days require an eight to 10-second pause, other days call for a rapid retrieve.

“The colder the water is, the longer I’m going to let it sit between jerks,” Lee said. “If the water temperature is 40 degrees or below, sometimes you have to let it sit for as long as you can possibly stand it. You’re going to fish it the same way you would in deeper water, except making target-oriented casts to visible cover. Keep a close eye on it because you’ll see a lot of the strikes before you even feel them.”

If deep winter fishing isn’t your thing, don’t worry—you’re not alone. When the weather turns sour, you can have the day of a lifetime by targeting shallow cover. If you keep these baits nearby in the coming weeks and months, you’ll have a great chance at catching a lot of great bass.