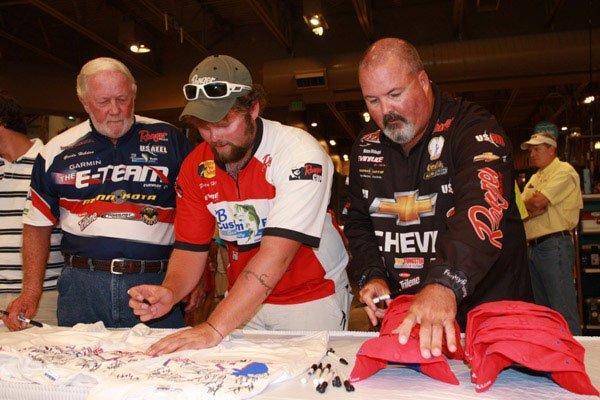 After Dion Hibdon won the 1997 Bassmaster Classic championship his famous father, Guido, stood in the back of the press conference smiling and enjoying his son’s success.

Guido won the Classic in 1988, followed by two Angler of the Year titles. Three years after his first championship, Dion carved out a spot in his trophy case for the 2000 FLW Championship.

When Payden Hibdon won the 2006 Junior Bassmaster World Championship, it established a unique bit of bass fishing history. Father, son and grandson had claimed championships, further cementing the Hibdon name in the sport.

â€œWatching him win â€¦ that was the best moment for me ever in fishing, bar none,â€ Dion said.

The Hibdons will add to their storied ledger this week on Cherokee Lake when Guido, Dion and Payden compete in the season-opening event on the PAA Bass Pro Shops Tournament Series presented by Carrot Stix. It is the first time all three have fished together as professionals in the same major tournament.

The Hibdons have traveled the country competing in major and regional circuits for more than three decades. Guido grew up fishing with his father on Lake of the Ozarks, eventually joining him and his uncles as a guide. Dion followed in those footsteps, and 18-year old Payden hasn’t been far behind.

â€œPayden, and the twins (Connor and Lawson), are just great kids,â€ Guido said. â€œWe’ve just always shared everything and have been together as a family. We play together, fish together, laugh together and have a lot of fun.â€

The Hibdon clan travels to tournaments in their Chevy pickups towing Ranger boats, a fishing train of sorts that people throughout the Midwest and bass anglers almost everywhere know by sight. They share a giant RV at campgrounds, with â€œMama Stellaâ€ Hibdon shepherding the clan and taking care of business when her boys are on the water.

â€œBeing together has always helped,â€ she said. â€œWith three kids and nine grandkids, we’ve always had some of them with us and it’s been a lot of fun. We’ve traveled the world and have seen a lot of places, and made a lot of great friends.

â€œFor the longest time I was Guido’s wife, and then I was Dion’s mother,â€ she adds, laughing a bit. â€œNow, I’m Payden’s grandmother. No one knows who I am!â€

Payden was just a freckle-faced lad when his father escaped Guido’s shadow by winning the Classic. Other anglers Guido fished with respected and joked around with Dion, and knew of his abundant skills, but to the public he was â€œGuido’s son.â€ Winning the championship a decade after his father did it to become the first father-son Classic champs erased that perception.

That same moment found its way into Dion’s life just a few years later when Payden won his championship on the Harris Chain in Leesburg, Fla. Like his father, Payden had grown up around Dion’s angling friends, including Peter Thliveros of Florida and Kenyon Hill of Oklahoma. Before the tournament, Thliveros had given Payden a good luck charm that paid off.

â€œPetey won a tournament the year before down there and gave Payden the spinnerbait he used in it,â€ Dion said. â€œPayden caught a fish on the first cast with it. Kevin Wirth was his boat driver, and at lunch after the tournament I loved listening to every blow-by-blow detail about Payden’s day.

â€œKevin said he lost a fish in a wad of pads and just calmly reeled in, fixed his worm and pitched back in there. Then he said, â€˜This may take a few minutes’ and left the worm just sitting there. Probably three or four minutes later, the line jumped and Kevin said Payden let the fish swim off with it out into the canal before setting the hook and putting it in the livewell. That’s just like Dad â€¦ very patient, never too excited or blown up about anything.â€

Payden concurred, saying his father and grandfather have taught him more about fishing than just techniques.

â€œMy grandfather is the calmest person I know,â€ Payden said. â€œHe never gets excited or flustered, at least that you will see. I’m pretty laid back â€¦ Dad and Pa both have a ton of patience. I’ve been around them so much that I have a ton of patience. On and off the water, they’ve taught me everything I know. I can talk to them about anything because we’re so close.â€

Late Tuesday night at the campground, Payden sat in his Ranger with 12 baitcasting and spinning rods on the deck, a stack of Trilene line and his girlfriend, Miranda Buerky, on the back deck seat helping him spool on new line. His maturity showed in the diligence to prep his gear, even late at night, because the next morning he had to have some work done on his boat at a local marine dealership.

Instead of putting it off, Payden showed a bit of experienced savvy knowing he might not have all his gear the next day when the family had to be at registration in mid-afternoon.

â€œSome kids his age might not have even fooled with it and just left everything,â€ Stella said.

Guido and Dion see the angling skills they believe will help Payden achieve his goals. He is set to graduate from high school in December, a semester early, and plans to participate on the FLW Tour in 2011 following the four-event PAA Tournament Series this year. He has competed in regional events and as a co-angler in some FLW Outdoors tournaments.

â€œHe is very capable and has an uncanny ability to find fish, which is about 80 percent of the whole deal,â€ Guido said. â€œHe and Lawson fish together in tournaments and it’s fun to listen to them strategize and make decisions. Dion and I will listen, and it’s hard sometimes to not say something or offer a suggestion. But we don’t because that’s part of the learning process.â€

Dion sees much of himself in his son, who flashes the same big smile that belies a honed intensity to succeed on the water.

â€œI think it’s cool as hell,â€ he said. â€œI think he’ll make a hell of an angler someday, and I say someday because we all go through those times of learning and success and puttering around when we hit a bad streak. Everyone does. I had one of the lousiest years ever this season. But at some point that lightbulb goes off. It might be a specific fish, a perfect skip under a willow bush or everything just goes right. Your confidence goes up and you realize you can do it.â€

Payden knows people will be watching to see if â€œDion’s sonâ€ and â€œGuido’s grandsonâ€ will carve his own path. Chances are good he’ll add another solid chapter to the family’s history book.

â€œI think it’s pretty exciting to have three generations fishing together,â€ Payden said. â€œAs far as I know, we’re the only family to have that. It’s very cool.â€