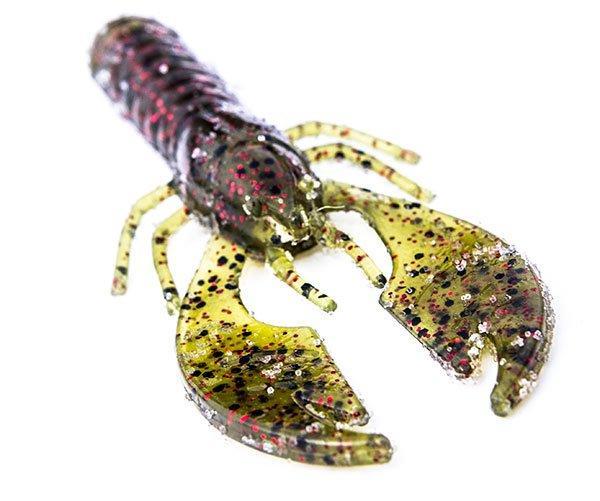 The more you fish with crawfish imitation soft plastics, the more you’ll realize they’re not all the same. A lot of the ones with great action rip to shreds after a single fish while some of the more durable ones have action comparable to a rock. If you search around enough, however, you’ll find some that really stand out.

I’ve been using the Yum F2 Craw Papi for the last several months with a lot of success. It combines the action, durability and versatility I look for in a soft plastic bait.

Above all else, I make it a point to find the most lifelike crawfish imitation baits I can find. Just because a chunk of plastic looks like a crawfish doesn’t mean it behaves like one in the water.

As the Yum F2 Craw Papi falls to the bottom, the two large pinchers kick violently throughout the water column. Many similar baits tend to lack significant action on the fall, but fortunately that’s not the case here. When you’re pitching and flipping into heavy cover, the initial fall is extremely important. If a bass is tucked into the thick stuff, you need to get their attention quickly, making maximum water displacement a necessity. Most of my bites on the F2 Craw Papi have come on the fall and I attribute it to the commotion of the pinchers.

When selecting a crawfish imitation bait, it’s also important to consider the action of the pinchers while the bait is at rest. When a real crawfish is confronted by a hungry bass, it doesn’t just sit there motionlessâ€”instead, it raises its pinchers to give itself a larger profile. If you experiment with the F2 Craw Papi in shallow, clear water, you’ll see its pinchers float about the rest of its body. Not only does this make it easier for a bass to locate it, but it’s also very natural-looking to big, smart bass.

One bait will last for several fish catches

I’m not a big fan of fragile soft plastics. They may look great in the water, but it’s extremely irritating to go through several bags of bait in a single day of fishing. It will end up costing you both valuable fishing time and a lot of money.

I’ve been very impressed by the Yum F2 Craw Papi’s durability, however. Upon catching a fish, it doesn’t come flying off your hook in the middle of the fight because of its hard tail section. When Texas rigging it, your first hook point insertion isn’t as easy as many other soft plastic baits, but that’s not a bad thing. This ensures that the F2 Craw Papi stays firmly attached to your hook shank, enabling you to catch several fish on the same bait. Its appendages hold up very well to short strikes and bluegill pecks as well.

Just last week I had an awesome day of flipping and pitching heavy coverâ€”one of those days where it seems like you can’t do anything wrong. I was using the F2 Craw Papi and was astonished by how many quality bass I caught on a single bait. I worked a stretch of docks and caught 7 bass on the same one, so needless to say, I’m a fan.

Although I’ve recently been catching the majority of my fish Texas rigging the Yum F2 Craw Papi, I’ve also done a lot of experimenting with it on different rigs. I’ve used it as a jig trailer, chunked it to deep rock piles on a Carolina rig and finessed finicky clear water bass with the 2.75-inch model with great results.

In my opinion, the primary reason for its versatility lies in the thin body design. Regardless of the hook type you prefer or the rig you choose to use it with, its hollow shell promotes excellent hook penetration. Even if a bass bites while your rod is out of position, a less-than-perfect hookset is often all that’s needed to get a solid hookup.

If your local bass love to gorge themselves on crawfish, I definitely recommend giving the Yum F2 Craw Papi a shot. Starting at $3.88 per pack, it comes in three different sizes ranging from 2.75 to 4.5 inches and delivers everything a crawfish imitation bait needs to put a lot of bass in the boat.

The Yum F2 Craw Papi is available at TackleWarehouse.com.