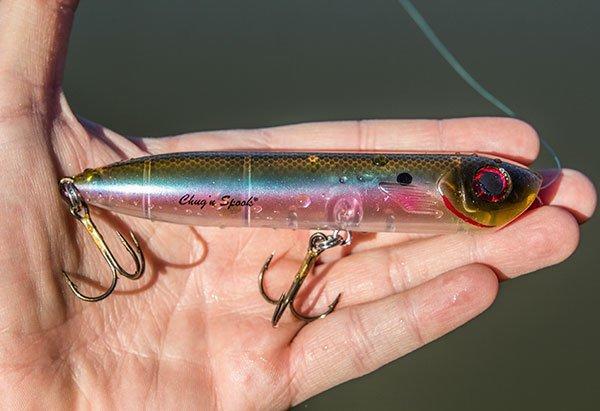 I’ve never met a bass angler who didn’t salivate at the thought of a massive topwater blowup. With the water cooling down in my home fisheries and the shad rushing to shallow flats, I’ve had the opportunity to put the Heddon Chug’n Spook to work. It has produced some absolutely giant blowups for me.

You’ve probably thrown the original Heddon Spook over the years, but this version is a totally different beast. It casts like a rocket, walks excellently and creates an entirely different type of commotion in the water.

Launch it to schoolers or cruisers

The Heddon Chug’n Spook comes in two sizes and I’ve been using the larger one for the majority of my fishing. Measuring 4 7/8 inches long and weighing in at a hefty 1 ounce, it’s a sure enough tankâ€”in a good way, of course.

The large size of the Chug’n Spook gives you outstanding castability. Whether you’re bombing casts across a windy point or sneaking up on a big wolf pack of bass cruising the shoreline, this lure gives you the opportunity to reach fish without spooking them with your boat. I’ve also tested it from the bank and it has allowed me to reach places I’d never reached in the past

I recommend using a 7-foot, medium-heavy casting rod for the Chug’n Spook. When you first tie it on, it’s going to seem pretty heavy. I was a little skeptical of this initially, but it actually works in your favor. It will take a few casts to get used to casting such a large lure, but if you allow the rod to load well on the back cast, you’ll be able to launch it into the next county

I get irritated when it takes a bunch of rod twitches before a topwater lure walks. Not only does it waste part of your cast, but it also looks extremely unnatural and will spook nearby bass.

The Chug’n Spook walks like a dream. I became a believer on a recent trip to Kentucky Lake with Jasonâ€”on my first cast with it, I was able to start walking it on my first rod twitch. It has a very wide walking action, but will walk narrower if you simply speed up your cadence.

Some topwater lures are hard to keep a cadence with. I’m not exactly sure why that is, but I haven’t had any problems keeping a cadence with the Chug’n Spook. I’ve been getting a lot of bites by momentarily pausing it next to wood cover and when I resume my retrieve, it picks up right where it left off and continues walking flawlessly.

Creates a lot of commotion

The Chug’n Spook has two rattles inside of it, which give it the famous “knocking” sound the original Heddon Spook is known for. Its big profile also moves a lot of water throughout the retrieve, but the real difference-maker is the cupped mouth.

Every time the lure walks from side to side, it spits water violently. Topwater fishing action can get slow in windy conditions, but the Chug’n Spook still manages to get the bass’ attention. I’ve thrown this lure over brush piles in very windy conditions and still managed some great blowups on it.

I’ve also noticed that most of the bass I catch on the Chug’n Spook aren’t hooked outside the mouthâ€”they flat-out inhale it. This could be due to a number of things, but I think it may be because of the aggressive water displacement. Even if the bass aren’t actively feeding, I’d imagine they would have a hard time passing up such a large and noisy “free” meal.

Tie directly to the lure

A lot of folks put a split ring on the nose of their walking topwater baits in order to achieve a wider action, but that’s not necessary with the Chug’n Spook

With a slow, steady cadence, it walks very wide and darts quickly without much water drag. I suppose you could add a split ring if you want a super-wide walk, but there’s no need to mess with it. You can take it right out of the package and catch plenty of bass

I have really enjoyed fishing with the Heddon Chug’n Spook for the last several weeks and I will continue to utilize it throughout the remainder of the fall. If you want to show the bass something different this year and make some incredible casts, I definitely recommend checking it out.

The Heddon Chug’n Spook is available at TackleWarehouse.com and most every tackle store out there. 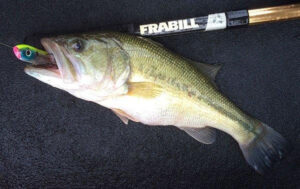