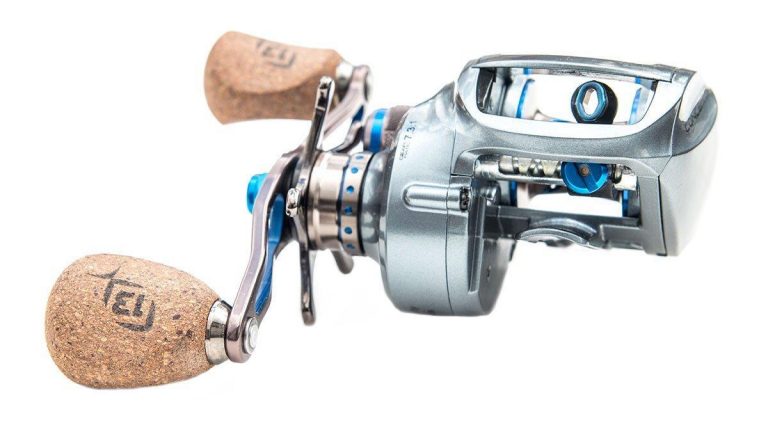 I’ve been hearing a lot of talk lately about the new products being released from 13 Fishing. I’ve used some of their rods before and have been quite impressedâ€”I use their $99 Omen Black nearly everytime I’m on the waterâ€”but until recently, I’ve never had a chance to use their highly touted casting reels.

For the past several weeks, however, I’ve had an opportunity to test the 13 Fishing Concept E Casting Reel. Simply stated, I had to see for myself what the fuss was all about. I felt it was necessary to distinguish hype from legitimate on-the-water performance.

After hundreds, if not thousands of casts and many hours of hardcore testing, I can confidently say that the Concept E is one bad dudeâ€”in a really, really good way. If you’re in the market for a high-end casting reel, I think there are several things you should know about this particular model.

I make a concerted effort to purchase lightweight casting reels. I used to buy the cheapest reel I could possibly find, but once I got my hands on a few reels in that 6-ounce range, I’ll admitâ€”it spoiled me a little bit. I spend thousands of hours on the water each year, so personally speaking, I’ll pony up the extra coin to enjoy some added comfort.

The 13 Fishing Concept E Casting Reel weighs just 5.78 ounces. I understand that it’s tough to appreciate that number by simply reading it online, but if you put this reel into your hands, you’ll immediately understand what a big deal 5.78 ounces is.

I have this 7.3:1 reel paired with my 13 Fishing Omen Black and it is, without a doubt, the lightest combo in my entire collection. Not only does it provide a noticeable reduction in hand and forearm fatigue after marathon weekend fishing trips, but it also seems to aid in sensitivity. The combo is beautifully balanced and instead of subconciously adjusting my grip to find that “sweet spot”, I feel like I’ve been able to become more in-tune to the rod blank itself.

This particular reel also “palms” quite well and has proven to be very ergonomic. It sounds cheesy as heck, but in a strange way, it feels like the reel and my left hand act as one cohesive unit while fishing. It’s difficult to describe without actually holding it in your hand, but it just feels very natural and comfortable throughout both the cast and retrieve. 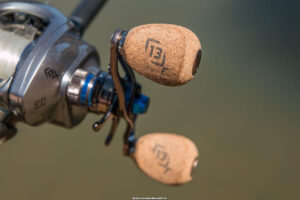 You’ll also notice that the Concept E has cork handle knobs. I was a little apprehensive about these, to be honest. I’ve never had many complaints about the more traditional handle knobs, so I wasn’t sure how I would like them. As it turns out, they’re actually pretty convenient, especially when you’ve been handling a lot of fish throughout the day. Instead of wiping the fish slime on my pants in-between casts, I’m able to keep casting because the cork seems to maintain a great grip with wet or slimy hands.

It has some shoulders to it

When a lot of anglers get an ultra-lightweight reel in their hands, they tend to become a little hesitant about its power. I totally understand the thought process behind itâ€”those thoughts still enter my mind from time to time. How tough can a 5.78 ounce reel really be? My fishing reels get abused. They’re not for looks or vanity, so I want a reel that can yank a 6-pounder over a laydown and withstand anything I can throw at it. If a reel can’t handle that, I don’t want it.

With that being said, I put a lot of time and effort into beating the proverbial brakes off of this reel. At $379.99, it’s expensiveâ€”I won’t make any bones about it. So before I suggest it to any of our readers, I wanted to make absolutely certain it’s not a sissy reel.

I’ve laid the wood to a bunch of fish with the Concept E and, at the time of this writing, I have not had the drag slip one time. It’s a fast 7.3:1 gear ratio, so I’ve primarily been pitching and flipping with it. When I’m in close quarters, I tighten the drag down as much as I can. I don’t want a bass to have any wiggle room whatsoever. I’ve wrenched bass up to 4 1/2 pounds out from under docks, laydowns and grass lines without any drag slippage. The aluminum handle has no flex even under a heavy load, which allows me to steadily crank on ’em until they’re in the boat.

Cosmetically, I’ve been pleased with how well the Concept E resists boat and hook rash. I hook all my baits onto my reels when I’m not using themâ€”I don’t really fool with hook keepers. It’s just a personal preference. I haven’t noticed any loss of color or scratches on the outer body of this reel, which isn’t necessarily a huge deal, but if I’m paying top-dollar for a reel, it might as well stay pretty for as long as possible.

Both long and short casts are effortless

I have a few reels that, for the life of me, I cannot tune to my liking. I’ll twist every knob and burn a hole through my thumb with fluorocarbon line and stillâ€”my line will loop, twist and backlash with even the slightest bit of wind. Irritating is an understatement.

I really like the castability of the Concept E, however. Its tension knob allows for very slight adjustments depending upon your lure weight and the 6-way centrifugal braking system is pretty awesome for skipping lightweight Texas rigs underneath docks.

Regardless of lure weight, I haven’t really needed to tune this reel like I expected. I pretty much took it out of the box, spooled some line onto it and went fishing. After about 3 or 4 casts and a few minor tension adjustments, I was ready to roll. I don’t think I’ve had to mess with the settings since I started using it.

If you plan to use this reel for casting purposes, you’ll probably get a case of the giggles. Maybe I’m just weirdâ€”I’m pretty sure that’s the caseâ€”but I can’t help but chuckle when I cast a 3/16-ounce weight a country mile. You don’t have to “baby” the spool, either which is really nice.

With all of that being said, however, I would like to see a higher line capacity on this reel. It’s rated for 100 yards of 12-pound line, which is fine if you’re tossing a squarebill around, but I have 20-pound fluorocarbon on my Concept E and it doesn’t hold very much. Now keep in mind, I’m making pretty short casts while flipping and pitching, so it’s not a deal breaker in my opinion. But I’m one of those guys who likes a little extra line on his reels in case one of those epic backlashes pops up throughout the day. It happens to everyone, so I thought the line capacity was worth mentioning in this piece.

It’s designed for saltwater use, too

I love saltwater fishingâ€”it’s how I spend my vacation each year. But I’ve never liked how I need to have a separate stash of reels for it. Until now, I only have one bass fishing reel that’s safe to use in salt water.

The Concept E is said to be totally safe for saltwater use. I won’t be able to provide any real-life information on this until June, so I can’t confirm or deny that. If it holds up well to the corrosive salt water of the Florida flats, I’ll consider it a huge “plus” for this reel. I’m looking at it from a consumer’s point of viewâ€”if you fork up a bunch of cash for a high-end casting reel, it sure would be nice if you could use it in any body of water.

If you were to close your eyes and let me put this reel into your hands, I honestly believe you’d fall in love. Everything about it feels “right” and after my testing, I can comfortably say that it performs just like a high-end reel shouldâ€”flawlessly. In regards to its $379.99 price tag, it’s hard to knock it after using it for several weeks. Every angler has different wants, needs and relative ideas of affordability, so it’s not going to be for everyone. If you can afford it, however, I wouldn’t advise you against making the purchase. It’s a definite Cadillac among fishing reels.

The 13 Fishing Concept E Casting Reel is available at TackleWarehouse.com.