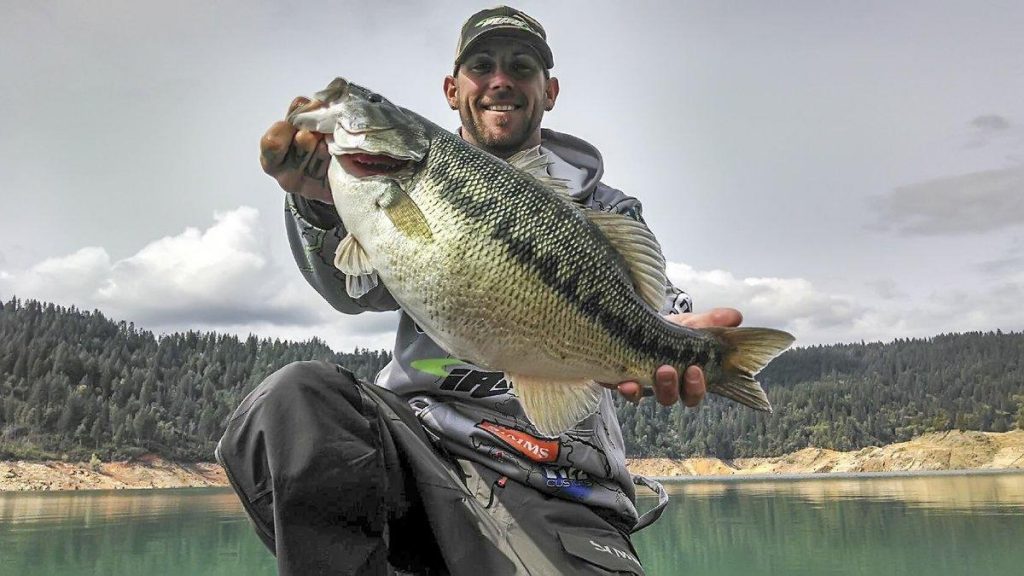 On the West Coast, anglers love, and often hate, fishing for suspending spotted bass in deep water. Their suspension makes them tough to target but the rewards are plentiful in the form of giant, record-scaring spotted bass on unique fisheries for anglers in the know.

“Hanging in deep water with practically no intrusion and simply rising to pick off a hearty meal now and then? Yeah, that’s a pretty good life,” Meyer said.

Unlike burning a bank for largemouth, intercepting these deep holding spots requires more effort than luck. However, a few key points will help you put together the pieces of this puzzle.

“For my summer spot fishing, I find my fish in a lot of the same areas where I find my swimbait fish in the winter. Instead of targeting the big fish on a point suspended way away, in the summer, I will find schools of bass up to 100 thick suspended over the ends of points. There are still plenty of fish on the bottom, but the summer suspended fish are the most fun.”

Western guide and angling instructor, Matt Allen notes that the spot’s propensity for frequent relocation can prove perplexing; but diligence and decisiveness are often rewarded with clustered marks on the graph.

“The key to summer is staying with the fish,” Allen said. “They’re headed offshore with the bait, so once you lose them, they’re tough to relocate.

“That said, checking long points, humps, or offshore breaks periodically will give you a shot at intercepting them again. Once you do, stick with that school as long as you can.”

Think of it this way: A group of teenagers making the rounds to each family’s home will often base the duration of their visit on the existing snack options. Suffice it to say that they’ll park their backsides when they find fresh pizzas waiting at one person’s crib.

“Keying on areas where baitfish collect is essential,” he said. “Creek mouths, humps, points, even deep water humps that don’t come near the surface will still support suspending spotted bass.”

Balancing the head-scratching elusiveness of summer spots is the generally aggressive nature of the ones you find. Schooling in big numbers creates a high level of feeding competition. Couple that with the 24/7 gluttony that is the spotted bass; and life gets fun in a hurry when you locate the meat ball.

Bait options are many, but day in and day out, experienced spot slingers dig that surface bite.

“My No. 1 bait for summer spots is a topwater,” Newman said. “I’ll use anything from a full size Spook or Vixen to a small popper.

“I will throw these baits over the end of a point in 40 feet of water. The fish will be suspended 10-20 feet down and the bites are awesome. You can get a whole school going sometimes. I also get them on spinnerbaits, jerkbaits and small swimbaits, but it’s hard to put down the topwater.”

Allen agrees on the topside tactics. Favoring a chartreuse/white River2Sea Rover, he’ll use this presentation to tempt fish in a variety of scenarios.

“The beauty of the walking bait is that you can fish parallel to shore when they’re moved up, through the mud lines when the summer boat traffic starts, and can even pull fish up from more than 100 feet of water when they’re suspending and chasing open-water baitfish.

“If I could only choose one way to fish it, it would be down the color line. Typically the color line is in the 10- to 30-foot depth range. By fishing that line you can pull bottom dwelling fish from the bank and suspended open-water fish at the same time.”

“I always will start with a Strike King Sexy Dawg and fish main lake points and bluffs,” Meyer added to the topwater discussion. “I will continue to throw it mid-morning looking for the shade that bluffs cast.”

Later in the day, if the topwater bite subsides, Meyer will turn to his deep game and arm himself with a drop shot bearing a shad pattern Strike King KVD Dream Shot worm on 6- to 8-pound fluorocarbon. If he marks fish holding closer to the bottom, a longer leader modifies that drop-shot presentation to the strike zone.

“If they are suspended, I will ‘video-game’ fish,” Meyer explained. “I’ll watch the drop shot go down on my graph and then stop it on the fish. Working it slowly in front of them usually gets them to bite.”

“The Yamamoto Senko is probably the most versatile of the options,” he said. “The first, and most common way, is the Neko rig. Basically, the bait is wacky rigged with a 1/0 EWG finesse wide gap hook and a nail weight pushed in one end. This rig can be fished from the shore all the way down to 80-plus feet of water and is incredibly versatile.

“I also rig the Senko wacky weightless with the same hook. Most anglers only fish a wacky Senko near the surface, but I’ll fish it as deep as 30 feet if the fish are being finicky. The slow fall is a presentation they’re not used to seeing in deep water.”

Now, in addition to the mostly deep-water pursuits of summer, Newman says he occasionally finds spotted bass moving shallow in the hottest weather. He surmises that these fish might be satisfying some crawfish craving by picking off the shallow ones.

“I have noticed if the water is dirty, they don’t suspend as much and I will usually try target them shallow first,” Newman said. “If the main lake is clear and fish are suspended everywhere; but the lake’s (in-flows) are dirty, then the spots will relate to the bank much more in these areas, as well.

“In those conditions my first go-to bait is a jig. I will target the bank all the way around the point and down to 20 feet on both sides. If they are not eating a jig then I will switch to a wacky-rigged Senko, shaky head or a dropshot.”