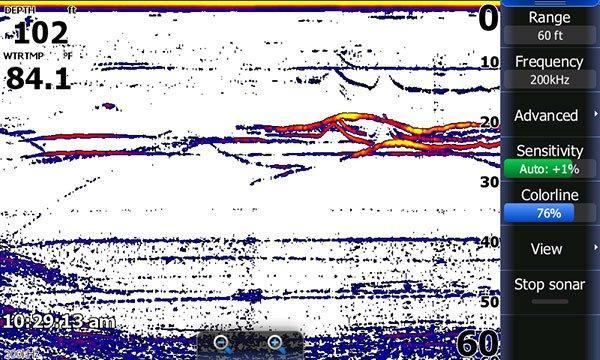 Suspending bass can be a nuisance to some anglers and joy to others. The fact that bass can be unpredictable when they are suspending makes everything from bait choices to locations difficult. But when you do find a productive area, there are some easy ways that your sonar can enable you to tempt and taunt bass into biting things like a drop shot, a spoon or other bait

In this series of screen shots I took last week on Table Rock Lake. We can learn a lot about how bass react and move on your sonar screen and how you can move them, react to them, cause them to react to you bait and otherwise bite your lures.

To be successful, you need to know a few key things:

Ups and downs with sonar bass

The first screen shot above you might look at that and it just looks like spaghetti lines and blotches and dots and dashes on a screen. To me that’s bass, a drop shot passing through, the raising and lowering quickly to get the attention of a bass above it, then a bite, a fight and several bass following him to the surface.

There are several things to understand about what’s on the Lowrance Touch screenshot here. The yellow and red lines are because the bass is right below the transducer and he’s staying under the transducer. So the sonar screen, moving left to right, continually redraws the ping and the result as the screen scrolls is a line. Sometimes you will see a more blue or fainter lines and that usually means the fish is just on the edge of the cone or just outside the range of the transducers view below. As they move more under the transducer their signals will get stronger.

So on this screen I noticed a a bass or two. I quickly dropped my drop shot down. It was just outside the cone of the sonar as it fell but as it got deeper, it swung underneath the sonar, and the signal got stronger. So I killed it right at the level of a lower bass.

I typically like to let my drop shot fall past a bass, because I want to see if he’ll chase. Sometime I’ll see bass streaking up on the sonar to meet my drop shot as it’s coming down. You’re going to catch that fish most of the time if you stop the bait and let him come get it. So on this fish I dropped past the first fish and stopped on the lower fish.

The bass started moving away from my drop shot, so I moved my bait up pretty quick to him and then back down again. I was baiting and teasing him. Turns out that high bass came swimming down quickly and chomped my drop shot. You can see the turbulence from me setting the hook and then as you notice several arches and streaks appear on the right (most recent) side of the screen. That’s other spotted bass that saw this one struggling and took off after him to see what was up and see if they could get the bait from him.

Sometimes I just keep the bass close by moving a bait up or dropping it down and testing their mood to see if they will follow or chase. If not I just try to react to their movements and move up and try to draw them back down to the bait if they start to swim up. Or I will just sort of slowly bounce them to keep it around the bait. I feel like they will pull some other bass if I keep them in the vicinity.

The bass in this screen shot above bit a time or two but never ate the worm. I don’t know why that was but I was keeping them interested as long as possible as I slowly meandered around in the area. 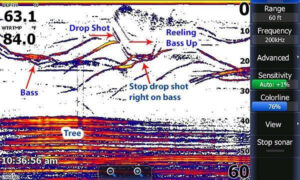 Catch the aggressive ones

Sometimes the bass literally react to the lure falling quickly and stopping right in their face, like the screen shot below.

Here you can see the bass are there and there is more than one. When you find several bass like that weaving in and out of each other closely, they seem to be pretty competitive and you often can tempt them and tease them against each other and catch them pretty quick.

In this shot, I saw the bass, dropped my drop shot to them quickly, and when I closed the bail and the decent changed to a pause, one grabbed it and came upward because my line just went slack. I reeled into the fish and brought it up. The other bass didn’t even seem phased by me hooking and pulling that bass up.

Keep tackle simple and focus on the screen

I’ve done this with jigging spoons, swimbaits on a jighead, grubs, shaky heads but day in and day out I will do this with a drop shot. Nothing fancy. I will keep my line small and if you get a lot of fish looking but not biting in clear water, you might try going down in line size. I use a 1/4-ounce Tungsten drop-shot weight, a No. 1 VMC, Gamakatsu or Trokar drop shot hook and a Zoom Z-Drop, Roboworm, Yamamoto Pro Senko or something long and skinny like that.

I don’t get too spun out on the baits as much as I do reacting to the bass, watching them intently on my Lowrance screen and moving the bait in a way that they react to. Test them. Taunt them. Tease them and catch them. 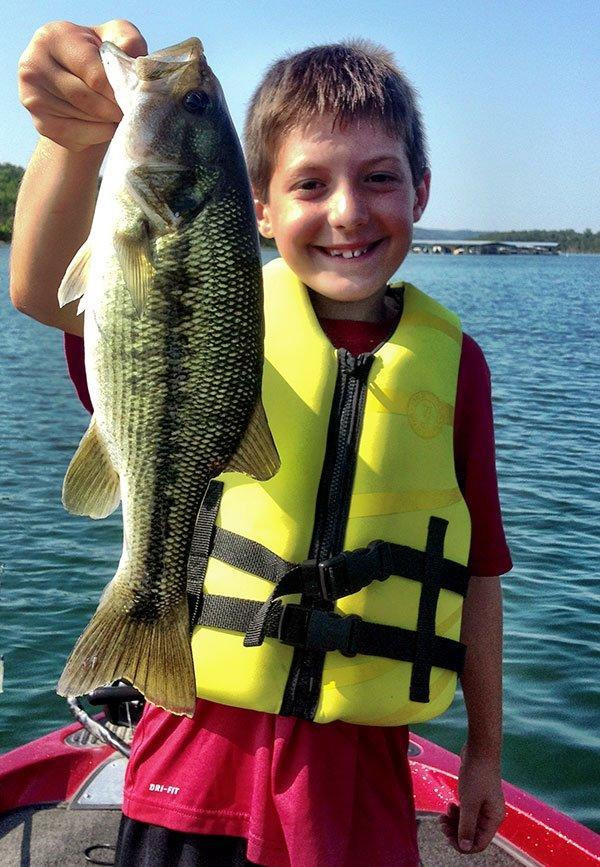