Whether it’s his tournament marshals or co-anglers in a pro-am, Ish Monroe raises a lot of eyebrows with his fishing success on a topwater hollow-bodied frog, namely his signature series Snagproof Ish’s PHAT Frog. And not so much that he throws a frog; but rather, where he throws it.

Perhaps a simpler answer, and certainly a shorter list, would be where he does not throw the amphibian impostor. If he can reach itâ€”and that’s not always a certaintyâ€”Monroe will send his frog there.

“The frog imitates so many different types of (forage) for bass, you can go just about anywhere you want with it,” the California pro said. “You can fish it on a bluegill pattern, a crappie pattern, a shad pattern, a duck pattern, a gopher pattern.

“You name it, and the frog can imitate any type of prey that bass want to eat.” 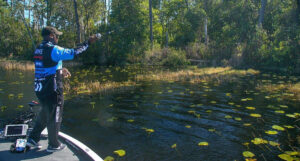 REMOVE THE FEAR OF HEAVY COVER WITH A FROG

Notwithstanding its open water charms, Monroe likes the frog’s versatility and its ability to sneak, slide and skip into the most daunting of heavy cover scenarios. Slick surface, weedless design, easily presented with traditional casts, sidearms tosses or even pitching; the frog fears no target.

There is nothing worse than being hung up all the time while fishing. It’s the main reason more anglers don’t catch fish consistently because they are not willing to delve into the thicker more snag-prone environments that bass frequent. A frog can remove all that frustration and fear and put a bait where big bass likely haven’t seen one.

“The great part about a frog is that you can target any type of structure and place it in any spot,” Monroe said. “The only thing you can’t do is fish deep with it; but I bet if you put it on a Carolina rig, it would probably still catch ’em.”

From emergent water willow, to submerged hydrilla, to chopped-up grass blown into pockets, to matted grass and sparse strands like Florida’s Kissimmee grass; a frog fits convincingly into any grass scenario imaginable.

“It’s the same for any habitat you fish â€” you start out with a normal cadence and if you’re not getting bites, you speed up, you slow down and you let the fish tell you how they want it,” Monroe said.

In terms of specific grass targeting, it’s all about those hidey spots. Irregularities are what he seeks.

“You’re looking for points, indentations, holes in the grass,” Monroe said. “Any type of irregularity in the grass is an ambush point for a bass. Those irregularities give them a place to hide and ambush bait.

Now, the latter for are typically straightforward left side-ride side deals. Even here, Monroe advises thorough coverage with multiple casts to give the fish different looks from different angles.

With laydowns and brush, along with overhanging limbs, his target is often a point he can’t actually see.

“Look for the places where you can skip that frog the farthest back,” Monroe said. “It’s those areas that are a little more open that allow you to get that bait farther back.

“The fish get back there where the average fisherman doesn’t get to them. So, if you can skip that bait back there to them, that’s a place where they don’t normally see a bait.”

When faced with multiple structures, or expansive cover like a sizable laydown, Monroe targets the largest of the available pieces or the biggest section of a fallen tree. He’ll send a few casts to the outer and smaller structure points, but his focused effort will always fall on those king-of-the-hill sections where the heavyweights stake their claim.

Okay, the frog might not come to mind first when discussing riprap, but when the shad are spawning, Monroe knows that this can be a highly effective option for gluttonous bass looking to capitalize on the brief morning frenzy.

The rocks, alone, are magnetic enough, but Monroe’s keen to notice the occasional secondary attraction, such as blown-in trash or pollen, both of which add an element of concealment and decreased visibility. Using such isolated occurrences can extend the riprap frog opportunity.

If the lake rises significantly, or if a big moon tide pushes farther up the rocks, bass won’t overlook any temporary baitfish accumulations. Such windows of opportunity, Monroe said, offer tremendous frog potential if, for no other reason, than the atypical appearance.

In any case, outcroppings, points, gaps, indentations â€” these are the high-potential targets Monroe seeks.

Approaching the manmade cover the same way he would a laydown or overhanging branches, Monroe does his best to bump those pilings that hardly, if ever, see plastic and metal.

“Target the shadows,” he said. “You always want to fish the shade.”

Skipping the frog, Monroe said, requires the same general dynamics as skipping a jig â€” make a sharp sidearm cast and raise the rod a little to keep the bait hovering right above the water.

“The frog’s greater surface helps it skip easier than a jig,” he said.

In these and any other surface level scenarios, Monroe encourages boldness in frog targeting. There’s no penalty for casting a frog where there’s no fish, but for those willing to venture a shot into the unknown, the peculiar, the abnormal; a straight-up day-making big bass may be waiting on the other end for your timely topwater frog.