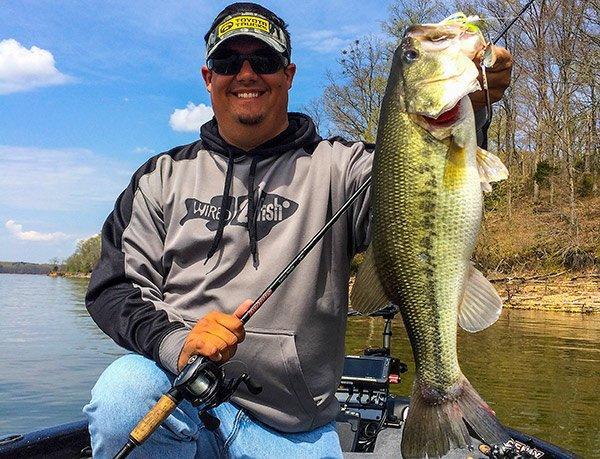 I learned a lesson this year that there is no such thing as too shallow in bass fishing. Bass go where they need to in order to survive. We as anglers believe that bass only do certain things at certain times based on conditions. We read something or watch something related to bass fishing and believe it is a hard fast truth.

I talked with Gerald Swindle and Kevin VanDam after the Bassmaster Elite Series event on Table Rock Lake this spring. What I realized after visiting with both of them was that there are definitely guidelines to bass fishing related to seasons and temperatures, but that those are just guidelines. They are not hard fast rules and the guidelines never apply to all the bass in a fishery. They are both convinced that anglers miss a lot of bass because they are so locked in on rules of bass fishing that just aren’t always true.

“If you think you’re too shallow, in many cases you’ll be surprised. I’m definitely not saying that all bass are always shallow. But there are always resident fish. There are always conditions that can bring bass back to the shallows.”

I had been toying with the idea this winter, so I began analyzing how true it was in my own fishing by picking one facet of bass fishing—water depth—and decided to see how often what I thought was too shallow was in fact incorrect.

What I’ve learned this year is bass are shallow. A lot. And at a lot more times of the year than we think as anglers. Sure there are times where if you’re fishing shallow, you’re missing the boat load of bass in deep water. But that’s not the point of this. The point is to not let preconceived notions cause anglers to miss out on catchable bass.

I made the following observations from winter to summer this year on bass being shallow, including the following:

Seeing is not believing in shallow water fishing

I’ve spent a decade fishing on clearwater ozark impoundments like Beaver Lake and Table Rock Lake, and shallow is not a term used much on fisheries of those types. So I’ve been conditioned to think if I can see the bottom, there is no way a bass would be up there. A common misconception it turns out with many bass fishermen.

What I’ve learned is that you cannot see as well as you think you can in shallow water. The other thing I’ve noticed is a shallow bass is really good at sitting very still. I was fortunate that this year I was able to look at a lot of bass on Kentucky Lake. I spent a few days studying how close I could get to the bass before they would dip their hand and take off from the shallows.

While it varied, what I realized was about the time I saw the bass, it was because the creature had already seen me and was on the move out of the shallows. Either I wasn’t  stealthy enough or a better guess is they can detect me long before I can detect them.

A bush in 8 inches of water. Too shallow for a bass if you can see the bottom, right? Nope. Walker Smith and Terry Brown came up to Kentucky Lake the end of May. The bass had basically left the shallows and were grouping up offshore. Well they bucked the trend went back into the very back of a large creek arm and started fishing bushes in a foot of water. A mere 45 minutes later and they were high-fiving over the 20-pound limit they had just boated in 6 to 12 inches of water.

They shade of willows and buck brush gave the bass some dark areas to conceal themselves in ultra clear water and it was game on. The fact is we can see into the water with our polarized sunglasses. But we still can’t see perfectly into those dark, shady shadows. And we’re not the only ones that can’t see what lurks in dark corners which is why the bass love them. 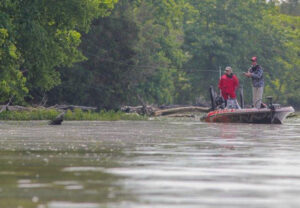 The Bassmaster Elite Series on Dardanelle found competitors facing extremely heavy rains that sent a ton of new muddy water into the system. And yet there were still 20- to 25-pound limits caught from a couple feet or less of water. The bass got into the cover and the muddy water made them a lot more comfortable about being shallow. Suddenly they didn’t have to hide from their natural predators and were much better concealed from their prey.

Jason Christie ultimately won swimming a jig through very shallow grass, getting reaction strikes from a moving bait in muddy shallow water. But several anglers reported catching bass in water less than a foot deep. The mud moved the fish in 3-10 foot of water into 1-3 foot of water.

Shallow water will warm up faster in the early spring or late winter and also cool first in the late summer and early fall. I found evidence of this the end of March this year. I found a group of fish in a foot of water that were there because the baitfish had moved up shallow. The water had warmed in the shallows and got muddy. A perfect storm for shallow bass.

I caught the first fish in about 3 feet of water. I kept working shallower until I my bait was landing inches from dry land. I wouldn’t move the bait a foot and have a big bass on the line. They were literally in inches of water in the low 50 degree range.

I’ve seen similar things happen where rain water was running off into the lake. The bass were inches from the bank in stained runoff that was several degrees warmer.

In late summer the same phenomenon will happen in reverse as the water starts to cool shallow first. You fire a topwater up on the bank. One pop of the rod tip and a giant bass rolls all over it.

I’ve even seen it happen after big cool rains in the middle of the summer. Suddenly there are bass shallow again that seem to show up overnight. 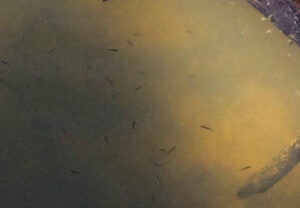 Small fish can come in the form of a bass’s fry or the fry of the forage he eats. The fry will hide in shallow cover, in shadows and shade in water that seems too shallow for a bass to be hiding out of your sight. But they are there. You drop the lure in the ball of fry and next thing you see is your line peeling off away from the cover.

But last summer I found bass in water less than 2 feet deep around every piece of shallow wood because the shad fry got to be around 1 inch long and they were around hard cover by the millions.

So maybe I’ve convinced you there are bass shallow a lot. If not all the time somewhere on the lake or place you fish regularly. So why don’t you catch more shallow? Well I know for me for a long time it was because my presentation was lacking. I don’t mean I wore cloud covered camo and painted my boat to look like the sky. I mean when the bait I intended to tempt mister bass with landed in 4 inches of water, the bass might as well have been launched out a canon, fleeing for their life.

This became evident to me the more I sight fished for bass around the spawn. If you’re what my friend FLW Tour pro Terry Bolton calls a “plunker,” well, I’m sorry to say you won’t catch many bass in water a foot or less deep. A plunker is what we refer to folks that keep their boat a long cast away from the bank and rare back and fire a cast as far and high as they can trying to hit the bank. The often do. But when they don’t, their lure makes a crazy big splash and whatever bass might have been up there is now fleeing for the depths. Don’t be a plunker!

Conversely what I noted was you could skip a bait like a Senko or a Zoom Fluke up there shallow, and even if it went right over the bass’s head in a few inches of water, they wouldn’t move much unless it was to attack. I had several bass eat a frog as it was skipping under a tree on a cast. They didn’t even wait for it to stop, they just fired off and caught it mid cast. Or mid skip I should say.

If you think you’re too shallow, in many cases you’ll be surprised. I’m definitely not saying that all bass are always shallow. But there are always resident fish. There are always conditions that can bring bass back to the shallows. Their are always bait movements that will trump any water temp, water clarity and any other preconceived notions about bass behavior. So never rule out the shallowest of water. You might just stumble on to the mother lode or a big bass that others have missed. 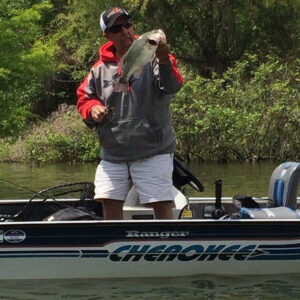