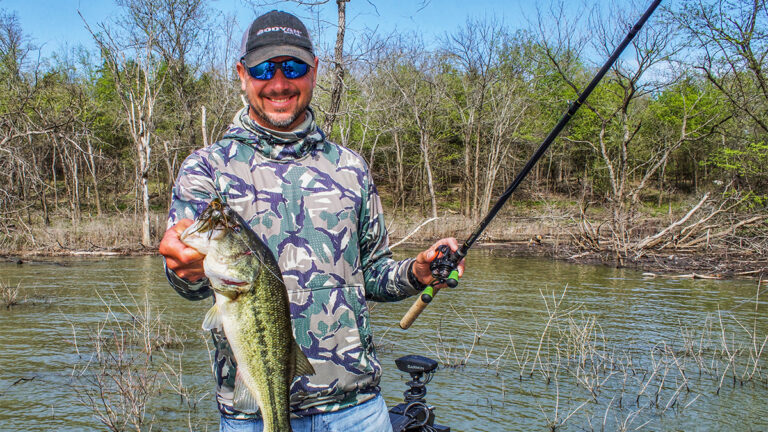 Bass fishing in flooded conditions incites one of two responses from fishermen; there are anglers who dream of endless shallow water targets to fish, while there are others who dread the confusing maze of new cover available when water levels rise. Whether you love it or hate it, high water and flooded conditions are a common occurrence in most reservoirs, lakes and rivers. Especially in spring, when bass migrate shallow, so you need to understand these scenarios.

Jason Christie is one such angler who thrives when the water is high and dirty. Many anglers see a mess looking at a flooded shoreline but Christie sees endless opportunities. While he’s proven his versatility across several professional fishing trails, Christie is known as one of the best shallow-water power fishermen on the planet.

Christie is quick to admit every high-water scenario is different, but the reigning Bassmaster Classic champ has a few flooded shoreline principles he keys in on to find fish in these conditions.

Before ever making a cast, when Christie launches his boat on a flooded fishery, he samples the water clarity throughout the lake. He might have an idea of what the water will look like but he’s learned you never know until you lay eyes on it.

“The first thing I’m going to try to do is find the right mix in terms of water clarity,” Christie said. “I don’t want to be fishing the dirtiest water available and I don’t want to be in the cleanest water, either. Going on a little boat ride before settling in and fishing shows you the lay of the landscape in terms of clarity.”

Christie likes to start where the dirty water and clear water meet or mix, but that isn’t always as simple as starting in the mid-lake area of a reservoir. Some creeks or rivers may be rolling mud while others have cleaner runoff, prevailing winds may push dirty water around to different sections of the lake and if a fishery has been high and muddy for a while, water coming in from the rivers may be the cleanest available.

“You always learn a lot looking around during flooded conditions,” Christie said. “Even on lakes I’m super familiar with, every flood is different and I’ll learn something counter to what I expected to see while driving around. These little learnings could be the difference between catching a pile of fish or flailing around like you’re lost.”

Find the pattern amongst the chaos 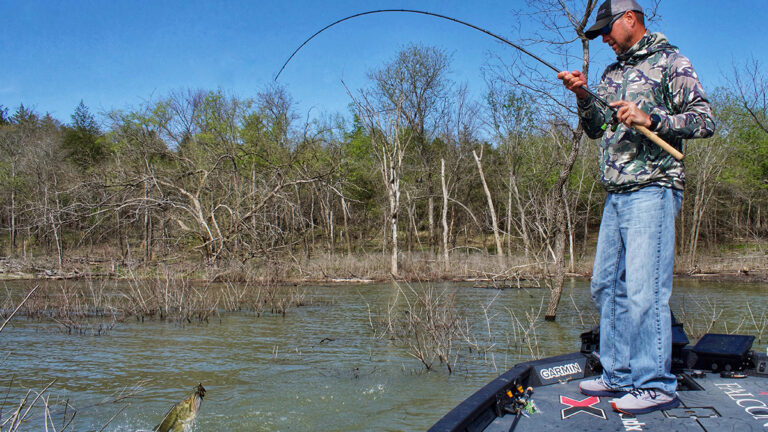 After Christie locates the area(s) he wants to fish, he begins trying to piece the puzzle together. In the spring he keeps bait selection simple, he’s either going to throw a Booyah Covert Spinnerbait and flip a War Eagle Jiu-Jigsu Flipping Jig or a Texas-rigged Christie Critter. The size, weight and blade combination may change but those two techniques are always on his boat deck. As fish become more active he keeps a topwater honest; a Heddon Super Spook or a Booyah Pad Crasher are his confidence baits here.

Christie uses these lures to sample different types of cover available, noting that while a flooded shoreline may look like a tangled jungle, there are always some spots better than others.

“There is always a pattern within a pattern in high water,” Christie explained. “Some days they want to be in the thickest part of the bush, others they may swarm new growth (green limbs or leaves in the water) or you’ll notice you get bit every time you come across a horizontal laydown in the water. They might be in the deepest bushes or the ones in the dirt. If you get more than one bite on a specific type of cover, it’s no accident.

“The conditions help dictate where those bass want to be but you might miss what they are telling you if you aren’t paying attention. I’ve had days where there might be a thousand great looking bushes in the water but the fish want to set up on barren pole timber, right at the base of a big tree. Heck, I’ve seen them get on rocks instead of wood in flooded conditions. Keep an open mind and fish what’s in front of you until you get some bites and the light bulb clicks on.”

Similar to fishing grass, Christie focuses on anything different before he has dialed into where the fish want to be; a single willow tree in the middle of bushes, an isolated piece of cover, flooded structure on a point or a row of bushes slightly deeper than the rest. These are what he considers high-percentage areas, helping him quickly clue into what he needs to be targeting.

Using the right gear is another key to this style of fishing. Christie uses a fast 8:3:1 Lew’s Custom SLP reel, a 7-foot, 3-inch heavy-action Falcon Cara flipping rod and heavy Sunline fluorocarbon. Specifically noting 25-pound Sunline Power 2C FC is important in bush flipping because it allows him to see the bites when he can’t always feel them due to his line being over limbs.

“You can’t tangle with fish in heavy cover using 12-pound line and expect to come out on the winning side,” Christie said. “Lots of times the fish have the advantage in close-quarter combat, you’re going to lose some. That’s just part of it, but keep on casting. You also can’t get frustrated with snags or lost lures in this kind of fishing. It’s going to happen but you might catch a great big one on your next flip.”

Christie believes a good pair of polarized Costa Sunglasses is critical to see targets underwater, just as Power-Poles are imperative to making repeat casts to high percentage pieces of cover.

Now to be fair, Christie and his family have won numerous tournaments back in the day fishing flooded cover out of an old aluminum boat with homemade spinnerbaits. This is not a rich man’s game by any means, but the right equipment ups your chances for success and will make you more effective. 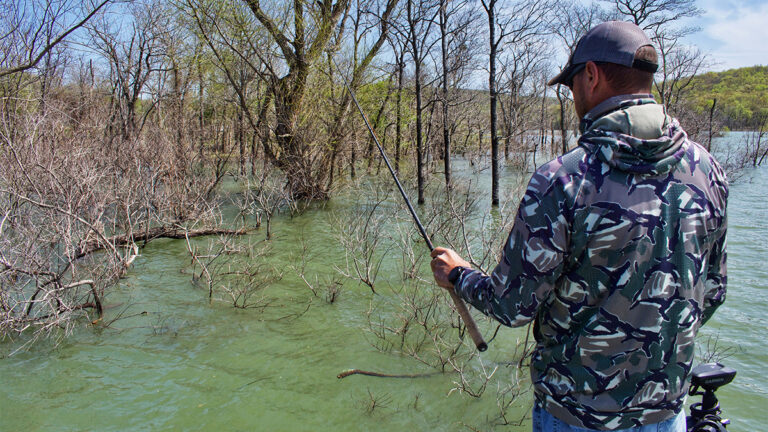 Another factor Christie focuses on is how the water level is changing day by day. Whether the water is rising or dropping, and how quickly it’s doing one or the other helps Christie figure out where the fish may be.

“If they are pulling the water level down by two feet a day it might not eliminate the shallow fishing, it’ll put them on the points or the outer edge of cover,” Christie said. “If the water is coming up, the fish will often want to have their nose on the bank, so shallow you can hardly believe a fish could be there. Knowing what the water level is doing gives you a good idea of where to look for the fish.”

More than knowing what the lake level is doing, having an idea of what’s under the water as it rises or falls is hugely beneficial, too. Whether that’s from prior experience of a fishery or simply by studying different lake levels on Google Maps before ever laying eyes on a body of water.

Back in June of 2013, Christie won an FLW Tour event on Grand Lake in northeast Oklahoma and he caught every fish flipping to flooded cover. Throughout that tournament they were rapidly pulling the lake level down. Knowing this, Christie focused on a large, flooded island. It was so thick you couldn’t get a bass boat to the middle of the island but every day as the water dropped, it pulled new fish to the outer edges where he could get to them. By paying attention to the water level, Christie banked on fresh fish coming to him, even in a shallow-water setting. His hunch paid off to the tune of $125,000.

While it can be daunting, high-water scenarios completely change the look of a lake and how it fishes. Instead of being overwhelmed, keep Christie’s tips in your back pocket and look at the water with an open mind. You’ll have plenty of targets to cast to and flooded conditions can result in some amazing days for bass fishing.