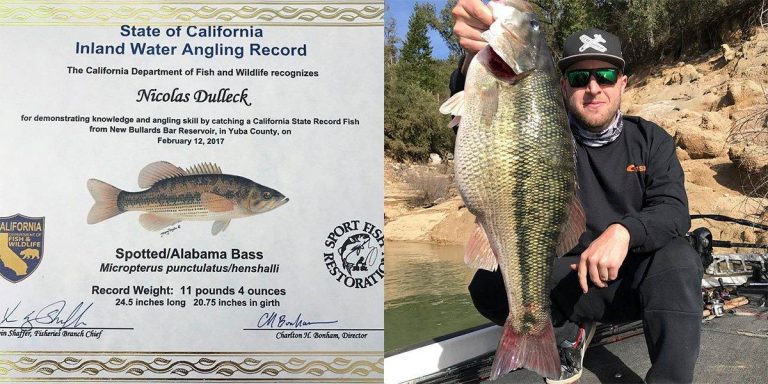 Nick Dulleck broke the world record for spotted bass, fishing on New Bullards Bar Reservoir this spring and that catch has now been certified as the California state record for Alabama/spotted bass. What is more interesting in this certification is that Dulleck has been cooperating with the California Department of Fish and Wildlife to hopefully make certifying record catches better for anglers. It’s no secret that several guys have caught world record fish in California, but have not been certified as state records because of processes that haven’t kept up with the times.

Now that we have much better ability to document full catches (see this state record cast to catch video here), California is seriously looking at updating the processes for certification as well. States often having to kill a record fish to bring it in for DNA sampling, or anglers having to store it overnight or for more than a day in livewell until it could be inspected by a biologist have kept a lot of anglers from claiming the record, simply because they didn’t want to risk the chance of killing a world-class fish.

“I didn’t want this record to just be about me,” Dulleck said. “I’ve worked with the IGFA and the California DFW a lot through this whole process. They have been great to work with. If I can help make the whole process better for all anglers, then I really want to do that. Then I will have done something that matters.”

Dulleck rolled video the whole time, captured the cast to catch as well as the weighing on dry ground in the presence of numerous local witnesses, got his scale certified, and filmed the live and healthy release of the giant spotted bass. Hopefully this is not only a new record but a new way of processing record fish so that we don’t have to destroy maybe the apex fish on various fisheries.