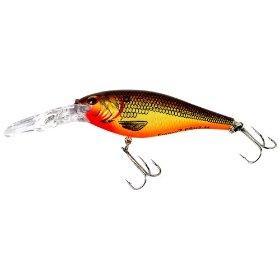 With over 30,000 SKU’s at Pure Fishing,  some baits do not get the marketing dollars that others do. That doesn’t mean that they didn’t go through a rigorous testing program or that science, a mainstay at Pure Fishing, was not used. Plain and simple, they were introduced with all of the technology and bait  making wherewithal that all products are given but they didn’t resonate with the bait buying public. That doesn’t mean they were not fish catchers or they had problems. They just didn’t see the marketing “light of day” that others may have. They are solid baits and worthy of a slot in the tackle box they just are not talked about a bunch.
The Berkley Frenzy line of hard baits  are one of those category of items at Berkley  that were thoroughly tested, painstaking effort was placed on the paint schemes and  pro’s endorsed as worthy of the Berkley Brand. Initial kick-off was strong but staying power was lacking. There are numerous hard bait manufacturers and simply put, this was not a primary line for Berkley. It  filled a niche and because of that lost the publics interest.
The Chigger Craw, the Crazy legs Chigger Craw, Gulp, Gulp Alive, PowerBait, Trilene, Spiderwire and a host of other staples got the publicity and they have legs. High profile tournaments were won on several of these baits and products  and instant notoriety was the outcome. The consumable line-up at Pure Fishing is their bread and butter and typically fringe products, like the Frenzy,  don’t get much love. Its understandable and the way business works but rest assured that doesn’t make them any less “fishy”. The Frenzy hardbaits catch fish and those savvy anglers that tried them love them. They are definitely an “Under the Radar” bait but much like people who love Corvettes, they have a strong following.
We particularly like the Flicker Shad and the  Frenzy Diver. They are a very different bait in this category. They create a very subtle wobble, swim like a bait fish even at high speeds  and multiple species like them. The Flicker Shad has a large following in the walleye market and the diver is a secret go to bait for anglers fishing grass lines and bluff banks. They have a very fishlike profile and the colors combine many of the colors of numerous baitfish. The diver has a very good bluegill pattern. The Flicker Shad looks great in perch. They do what they are suppose to and they are somewhat off the beatin path. Many times they can be found in bargain bins and on sales racks.
When the bite is tough the Berkley Frenzy is a go-to bait and one worth owning
Next