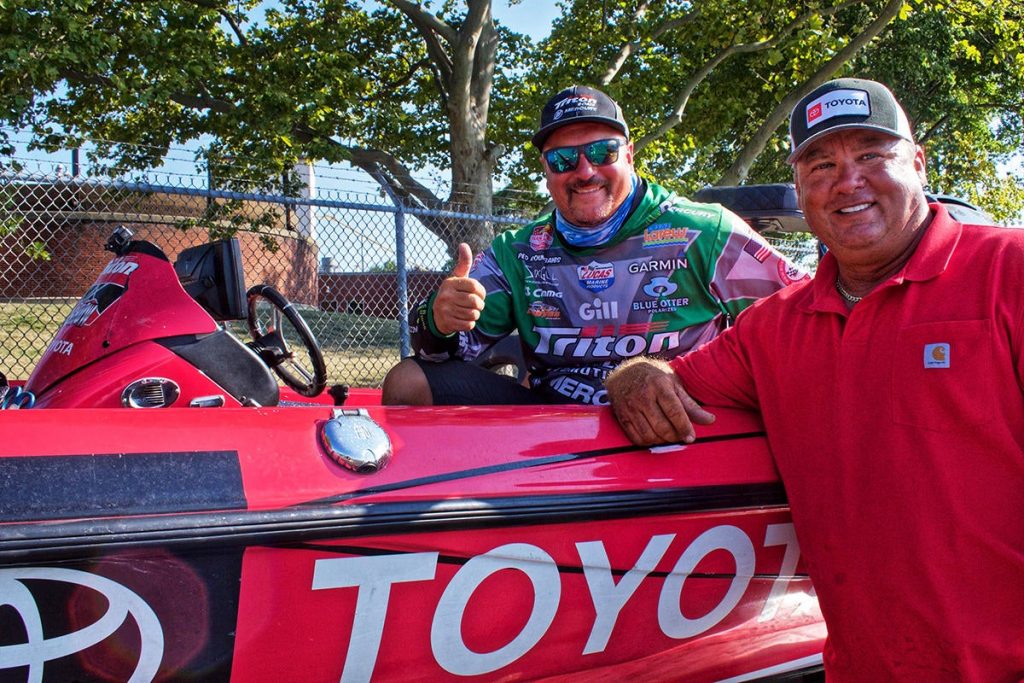 We may know Terry Scroggins by his nickname “Big Show”, but most of his peers and fellow competitors know Scroggins for his big heart. The Team Toyota pro is as true of a representation of the phrase, “give you the shirt off his back” as you’ll find in professional bass fishing.

That fact was proven yet again at the end of day two during the FLW Tackle Warehouse Pro Circuit Super Tournament on Lake Erie when Scroggins offered to let Fred Roumbanis use his Triton Boat on day three of competition.

Scroggins and Roumbanis both made the 190+ mile body-jarring run to Lake St. Clair on Wednesday, and they both caught good bags of fish. Unfortunately Scroggins fell short of the day three cut, while Roumbanis found himself in 9th place at the conclusion of day two.

Upon getting his rig to the hotel and beginning to work on tackle, Roumbanis realized his boat was going to be unable to make the long run the next morning due to “technical difficulties”. It was late, and Scroggins was beaten and battered from the rough water, but he didn’t balk at the chance to come to his Triton-Mercury teammate’s aid.

Scroggins packed his Toyota Tundra absolutely full of all his rods, reels, and tackle before meeting “Boom Boom” around 10:30pm Wednesday night to help swap his gear into the boat.

“Terry didn’t even hesitate when he found out I needed a hand – he was adamant,” Roumbanis explained. “Listen, if you are going to let someone borrow your boat, you do not want to do it on Lake Erie. Especially with a 15mph wind! Big Show is truly a great guy and friend… I can’t thank him enough.”

Whether he’s helping a fellow competitor work on his equipment, showing someone where they can catch their next keeper bass, or grilling out steaks for the service crew you can often find Scroggins living up to his reputation as a guy who is always willing to give a helping hand.

“I’ve been fishing professionally for 16 years and I’ve known Scroggins since day one,” Roumbanis said. “He’s always been known as the angler who has everyone’s back, and because of that he has everyone’s respect.”

“Treat others the way you want to be treated” – is a saying we’ve all heard but it’s truly how Scroggins carries himself on the professional fishing trail. In this crazy day and age that might be the best lesson we can take from a bass fishing tournament.