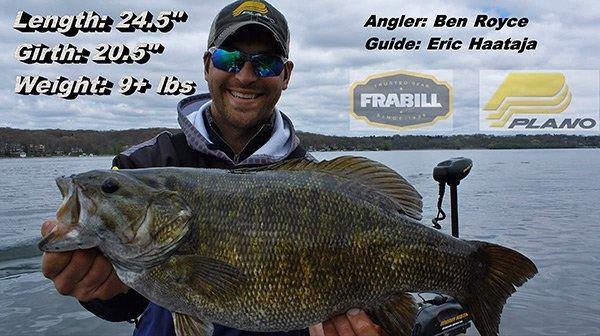 Have you seen the Plano video of the giant 9-pound smallmouth? This might be the largest smallmouth bass landed on film. If there is one larger, we sure would like to see it too.

But fishing guide Eric Haataja and was fishing with Ben Royce on a small lake in Southern Wisconsin when they caught and landed a 9-pound smallmouth on a Berkley Havoc Sick Fish swimbait. The Wisconsin state record is 9 pounds, 1 ounce and was caught in 1950. This fish could certainly have challenged for the Wisconsin state record, but neither angler wanted to kill a trophy and definitely wanted it to breed and produce more giant smallmouths in the future. Kudos to the Frabill Plano pros on their conservation mindedness in the wake of having a potential state record on the line.

Check out this sick big smallmouth on video: