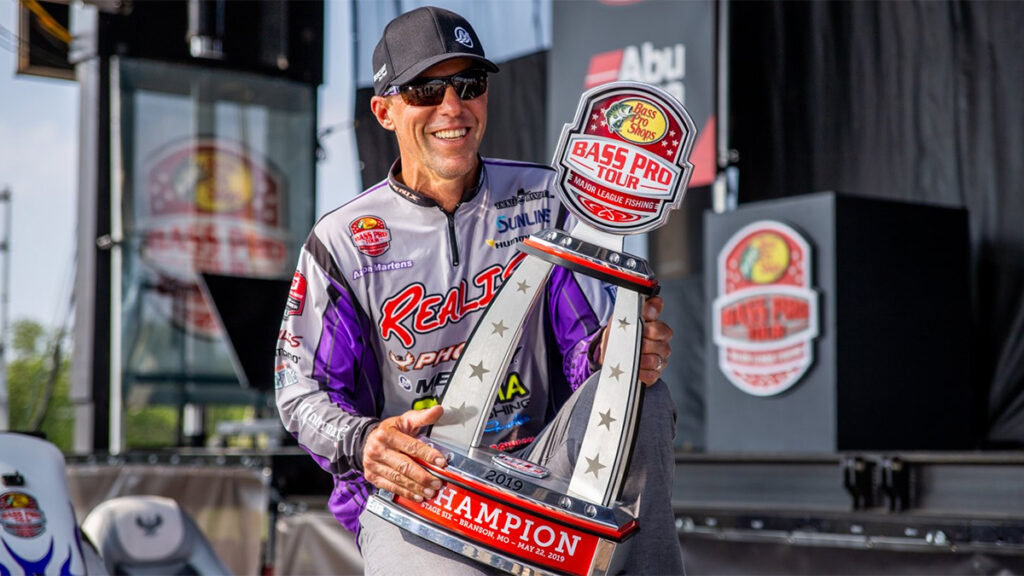 We have absolutely heartbreaking news to report. Legendary and highly esteemed professional angler Aaron Martens has passed away at the age of 49 after a tough and courageous 19-month battle with glioblastoma. The news of his passing was confirmed by his beloved wife via social media.

Martens is one of the best competitive bass anglers to ever live. With the Bassmaster organization, he competed in 241 tournaments with career winnings amassing $3 million. That includes 20 Classic appearances, three Bassmaster Angler of the Year awards, 183 tournaments in the money and a total weight of over 8,500 pounds weighed in. With Major League Fishing, Martens appeared in a REDCREST championship and won the 2019 Bass Pro Tour Stage Six on Rock Lake.

The Wired2fish team has nothing but positive things to say about our extensive time working with Martens.

“Everything Aaron said and did was sincere and had a very palpable innocence to it,” said Wired2fish Managing Editor Walker Smith. “He was such a beautiful mind and soul. I have spent a lot of time in the boat with him over the years and all he ever wanted to talk about was my career, my happiness and my family’s wellbeing. He was such a sweet person and sincerely loved people, especially his family; they were his absolute pride and joy. I never felt like I was working with one of the best bass fishermen to ever hold a fishing rod. I was working with a good, pure-hearted guy. I’ll forever remember those moments running down the lake with him, laughing and smiling together.”

Wired2fish Publisher Jason Sealock also cherishes the many hours spent in the boat with Martens over the years.

“Aaron was the biggest-hearted person I’ve met in the fishing industry,” Sealock said. “We say people are big hearted but Aaron really was all heart when it came to everything. He shared his best tricks with everyone because he wanted you to have as much fun fishing as he was. Not because he thought he was smarter or better. But because he wanted people to have so much fun and not have something like a knot or a bad hook ruin their day.

“He really loved helping people. He would stop and help people with a flat tire, or spool up their reels or help them tie on baits after a day of fishing. He just had a rare love for everyone in the fishing fraternity. He got so excited talking about fishing with people, you couldn’t help but be more jacked up about fishing after talking with him. I will hold the moments I shared with him in high regard. He truly was one of the best on and off the water.”

Wired2fish President Terry Brown lives and breathes the fishing industry and has a hard time remembering someone with a purer and more loving heart than Martens had.

“The passing of Aaron puts life in perspective,” Brown said. “No doubt he was a great angler, maybe the purest angler I have ever seen, but more importantly he was one the kindest and most sincere people I’ve ever had the chance to know. I may have not have seen him for months or years but he always had that same smile and eyes as big as silver dollars when we met. The world indeed needs more people like him and there will be a hole in the hearts of all who had the pleasure of knowing him. Prayers for Lesley, the kids and his mother Carol on his passing. Aaron was a true Hall of Famer in life. I will miss you, dude!”

Martens had the stats. He had the career earnings. He had the finishes. Our grandchildren will watch footage of him and undoubtedly become spellbound by his otherworldly fishing ability. But honestly, he will be most remembered because of the person he was. He touched people all around the world and we will sorely miss him.

His lovely family will be in our prayers as they navigate through this most difficult time in their lives.

To Aaron: We’re sure going to miss you buddy. Thank you for the laughs, the hugs, the respect and the love. You won’t be forgotten… we’ll make sure of it.