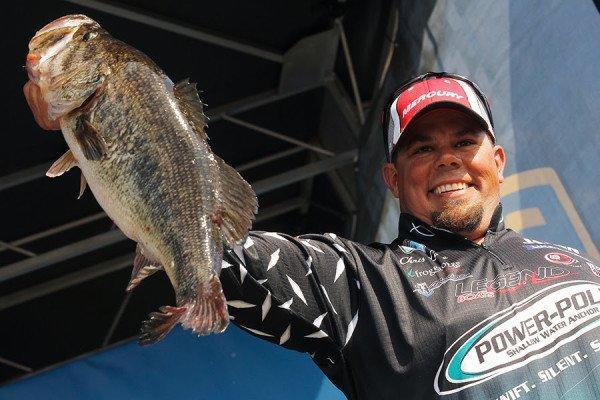 Not in a Bassmaster Elite Series competition. Not when it’s on a big-fish factory like the St. Johns River. And not if you’re Chris Lane.

â€œI have to go out there and do the very best that I can,â€ said Lane, the 2012 Bassmaster Classic champ from Guntersville, Ala. â€œAnything can happen on the St. Johns River. There’s no safe lead here.â€

Lane, who jumped from 15th into first  on Friday  after producing a monster bag of five bass weighing 37-9, brought in 19 pounds, 9 ounces  Saturday  for a three-day leading total of 75-13.

Mark Davis of Mount Ida, Ark., anchored in third place with 61-7 over three days. Keith Combs of Huntington, Texas, was fourth with 60-9. Alton Jones of Lorena, Texas, who won the 2012 Elite event on the St. Johns, rose from eighth place into fifth with 59-4. First-day leader Randy Howell of Springville, Ala., was sixth with 58-14.

Lane’s 12-8 lead was one of the widest margins in the Elite Series’ nine-year history. The largest was 12-15 by Idaho’s Brandon Palaniuk at the 2011 Bull Shoals event in Arkansas after three days of competition. (Palaniuk won by 12-14.)

Lane was not entirely pleased with Saturday’s conditions.

â€œI still caught quite a few fish today, but to me the bite was off,â€ Lane said.

While he had a productive St. Johns lake to himself for two days, where he’s been flipping and pitching into vegetation, he had company  Saturday. Lane said they were recreational anglers who showed up to fish what was probably their favorite place.

Other factors came into play too.

â€œIt’s shallow where I am, and the water was murkier. One of my areas I didn’t even get to fish today because the wind was blowing so hard out of the west, making that water difficult to fish,â€ Lane said.

Lane weighed a 9-10 as his largest bass of the day.

â€œI’m going to concentrate on my area  tomorrow  and see if I can’t put enough weight in the boat to bust this thing out, maybe get five of those 9-pounders,â€ he said.

Lane said he wants to hit the â€œcenturyâ€ mark, or 100 pounds in one event. Twenty-five pounds would get him there. And once he had 25 pounds, he’d come back to the docks, he said, even if hours were left in the competition day.

Hite was in second place on Day 1, then plunged to 10th on Day 2. He recovered nicely to recapture second on Day 3, thanks in part to an 8-pounder, his largest of the day.

â€œI caught a lot more fish, and I lost a nice fish or two, and still had almost 25 pounds,â€ he said. â€œI think  tomorrow  I can catch 30 pounds. I would not have said so yesterday, but now I feel like I can. Chris did it yesterday.â€

â€œNo, not here,â€ Hite said. â€œSure, things have to go right. When you get those big bites, you have to put them in the boat. That’s why I fell behind yesterday. If things go right for me, and not for someone else, I can catch him.â€

For his 37-9 sack of Day 3, Lane remained the top contender for the event’s Berkley Heavyweight bonus of $500.