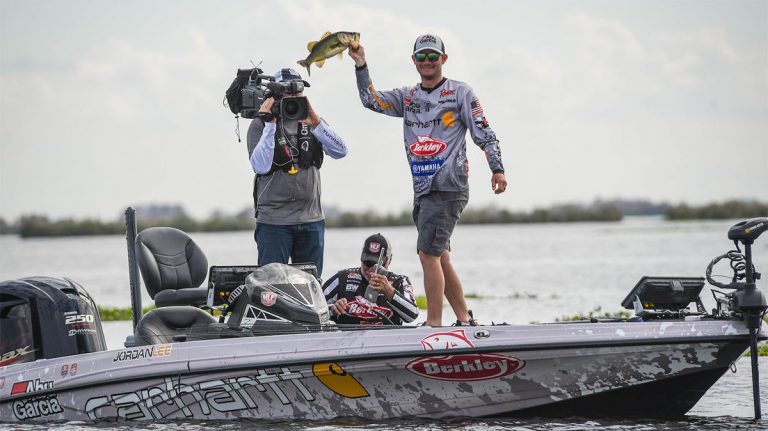 Is there any level of fishing competition that MLF pro Jordan Lee doesn’t excel at? So far in the Alabama pro’s career, it sure doesn’t seem like he has any limitations.

Lee won a national collegiate championship in 2013 at the age of 21, and put back-to-back Bassmaster Classic trophies on his mantle in Grant, Ala., in 2017 and 2018. At the age of 27, Lee owns the most prolific Top 10 success rate in the sport (he’s made the Top 10 in just over 35 percent of his tour-level tournaments).

And now a 43-pound piece of hardware that nobody else will ever be able to claim: the inaugural MLF Bass Pro Tour championship trophy.

After finding an area of clean water on the north end of Lake Garcia, Lee put together a flurry of 2- and 3-pounders in the third period by winding a vibrating jig through the grass, adding over 32 pounds to SCORETRACKER in the period to distance himself from Edwin Evers and Jared Lintner.

“(The third period) was an unbelievable period,” Lee said. “I fished my way into that last area and got bite after bite after bite – and caught good ones, too – and just found myself in a spot with clear water and a lot of fish. Fish were moving in to spawn, so there were bigger fish in there. Edwin was coming on strong right there at the end, it feels pretty darn good.”

Evers did his best to overtake Lee. The Oklahoma pro matched Lee fish-for-fish in the final 2 ½ hours of competition – Evers and Lee both caught 16 fish – but couldn’t match Lee’s quality. Only three of Evers’ fish in the period were over 2 pounds, while 11 of Lee’s were between 2-4 and 4-11.

“I had the bites today, I just wasn’t on the right fish,” Evers said. “It was that simple. I thought I’d find a few bigger ones, but I never could get on bigger ones consistently.”

Lintner looked like he might be the man to beat until Lee and Evers put the hammer down in the final period. The Southern California pro put back-to-back fish of 4-1 and 3-15 on SCORETRACKER late in Period 1 flipping a 3-inch hand-poured black/blue/silver-flake craw, and then took the lead just before the end of Period 2 with the Berkley Big Bass of the day, a 5-5.

His flipping bite faltered in the final period, though. Lintner landed six scorable fish in the final 2 ½ hours, all but one of them between 1-3 and 1-7.

Stage Two of the MLF Bass Pro Tour kicks off Feb. 12-17 in Conroe, Texas, where the 80-angler field will compete on Lake Conroe. This 21,000-acre impoundment of the San Jacinto River north of Houston hosted the 2017 Bassmaster Classic (won by Jordan Lee) and the Toyota Texas Bass Classic (MLF angler Dave Lefebre won the 2009 TTBC there), and is one of Texas’ most prolific producers of trophy-sized largemouth.