UPDATE (2/22/2016): We have learned that the deceased man in the accident was Michael Conaway from Magnolia, Texas.

We suffered a tragic loss to our Impulse family today, in a boating accident on Lake Conroe… Michael Conaway, you were…

According to multiple Texas news outlets, an angler has died after a severe bass boat collision on Lake Conroe. The angler has not yet been identified pending notification of family. Authorities say the deceased male was in his 50s.

Montgomery County Police Reporter states that the two bass boats were traveling near Scott’s Ridge and both anglers began to execute a turn. Instead of heading two separate directions, both boats collided almost head on. One boat was nearly cut in half. 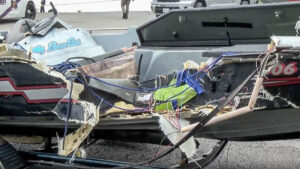 Anglers pulled the man from the water and were performing CPR when authorities arrived at the scene. He was pronounced dead at approximately 8:35 this morning.

The driver of the other boat was taken to Conroe Regional Medical Center for mandatory blood work to test for impairment. Authorities say there were no obvious signs of impairment.

There were reportedly two bass fishing tournaments on Lake Conroe today, but it’s currently unknown if the two boats were participating.

We will update this story as additional details emerge.

Information on this incident was gathered from Montgomery County Police Reporter, KHOU.com and YourConroeNews.com.

PLEASE READ & LEARN THE RULES OF THE WATER HERE