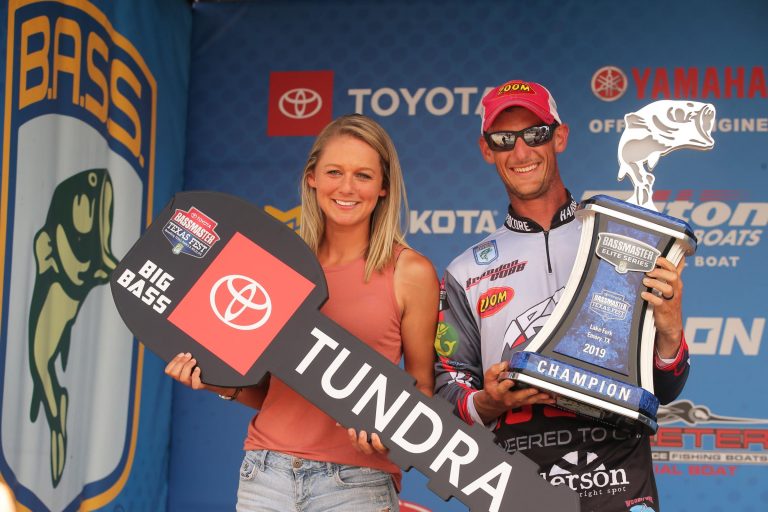 It’s the inspiring mantra B.A.S.S. unveiled before the 2019 Bassmaster Elite Series season, and it perfectly sums up the last two months for Brandon Cobb.

After earning his first Elite Series victory in April on Lake Hartwell in his home state of South Carolina, Cobb caught one big bass after another at Texas’ Lake Fork to amass a four-day total of 114 pounds. It earned him his second six-figure first-place prize of the season on one of the biggest stages in bass fishing – the Toyota Bassmaster Texas Fest benefiting Texas Parks and Wildlife Department.

“It’s absolutely been an amazing season for me,” said Cobb, who also earned an automatic berth into the 2020 Bassmaster Classic presented by DICK’S Sporting Goods with the victory. “I had a lot of success on the FLW Tour, but I never could quite put together a win.

“For so many things to go right this season, it’s just been a dream come true.”

Cobb went into the day with nearly an 8-pound advantage over his closest competitor. But after a slow start, he actually lost the lead for a while to Georgia pro Micah Frazier.

Then Cobb, a 29-year-old former college angler at Clemson University, started working the magic that helped him grab the lead during Sunday’s semifinal round with a catch of 37-15.

“It was really boring until you’d run into them,” he said. “Then when you’d hit them, it was amazing.”

Cobb caught the bulk of his weight all week fishing around shallow shellbeds where bass were feeding on spawning shad. His primary bait was a Yo-Zuri Duel Hardcore Minnow Flat 110 SP jerkbait in ghost pro blue.

“I was basically running points and flats, and the areas I was fishing might be 6 feet deep for 200 yards,” he said. “But the fish, when they were eating, were in 1 to 2 1/2 feet of water up on the tops of the shellbeds.

“I’ve got mud all over me because I had to pick mud off my jerkbait bill just about every cast. I was literally jerking it into the bottom.”

Surface activity always signaled Cobb that the fishing was about to get good.

“When you hit a big school of shad up on one of those shellbeds, I think you pushed the bait up with your boat,” he said. “When that happened, bass would start blowing up everywhere on the surface.

“I hooked two or three doubles (two fish on one cast) today and actually caught one double.”

During the rare moments when Cobb wasn’t fishing the offshore shellbeds, he fished some shallow shoreline structure hoping to catch a few spawning fish. While doing that during Sunday’s semifinal round, he managed to boat an 11-1 monster that ranked as the Toyota Tundra Big Bass of the Week.

Cobb earned a new Toyota for that fish to add to the $247,500 cash he’s already won this year.

During ceremonies at the 50th Classic, to be held next March in Birmingham, Ala., Cobb will also receive one of the most exclusive awards presented by B.A.S.S. – the Century Belt. The belt is only given to anglers who catch at least 100 pounds of bass during an Elite Series event.

Cobb has seemed cool and calm all season long. But now, with all of that hardware – and a Classic berth – already secured, he said he can be even more relaxed the rest of the way.

“I’ve been in position to win these kinds of events so many times,” he said. “But something would always go wrong, whether it was a bad last day or whatever.

“This has been the best year I could dream of. Aside from winning the Classic, how could it get any better than this?”

The fishing was as good as expected on Lake Fork with 63 five-bass limits of 20 pounds or more caught in four days. Of those 63, five topped the 30-pound mark.

South Carolina rookie Patrick Walters remained in the lead in both the Toyota Bassmaster Angler of the Year and the DICK`S Sporting Goods Rookie of Year race, after five events, earning $1,000 for AOY and $500 for ROY.