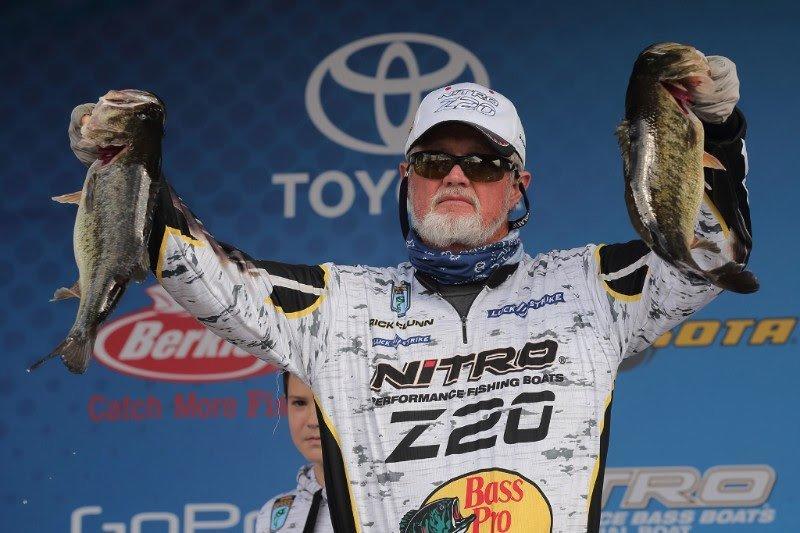 It was his first giant step toward becoming a true legend in the sport of professional fishing.

On Sunday, he won for the 15th time on the B.A.S.S. circuit — and in many ways, this step might have gone even further toward cementing his legacy.

Clunn, who will turn 70 in July, caught five bass that weighed 19 pounds during Sunday’s championship round and won the Bassmaster Elite at St. Johns River presented by Dick Cepek Tires & Wheels easily with a four-day weight of 81-15. The win was bolstered by a monumental catch of 31-7 during Saturday’s semifinal round.

“I was certainly feeling some pressure after having such a big weight yesterday,” said Clunn, who finished 4 pounds ahead of second-place finisher Greg Hackney (77-15). “Through the years, you just learn to hide it better. Having my son (River) here helped a lot.”

After catching 16-11 and 14-13 the first two days, Clunn was in 31st place and seemed a longshot to make Sunday’s Top 12 championship cut. But the incredible catch of 31-7, which ranked as the third-best five-bass limit of his career, gave him the lead going into the final round with 62-15.

Though he had varied results during the four-day event, he said he used the same bait almost the whole time — a homemade bladed jig with a green skirt and a white Luck-E-Strike swimbait for a trailer. He said he calls the bait the “Trickster 2,” and he believed it would work after watching some local anglers fishing with live shiners earlier in the week.

“I actually watched shiner fishermen in Crescent Lake flipping shiners up under a dock, and they were catching fish,” Clunn said. “I saw that, and I tied on a big Luck-E-Strike swimbait. I flipped it up under a dock and caught about a 6-pounder. That got me on the shad-type baits.”

Though much of the field was sight fishing for bedding bass around the fishery’s grass-covered shorelines, Clunn chose a different approach. He used the bladed jig around the same type of cover in Lake George, enticing bites from fish he couldn’t see.

The key to his magical day Saturday was an hour’s worth of wind and rain that he said seemed to make the fish bite better.

He fished his bait on 65-pound braid with a 7-foot-6 Bass Pro Shops Johnny Morris CarbonLite rod — and he didn’t hesitate to manhandle big bass when they bit his homemade lure.

“I put a little bit different hook on my bait and a different split ring, so it’s better suited for handling big fish,” Clunn said. “When you’re fishing for big fish, it’s important to use the right equipment. I was swinging 6-pounders in the boat this week.”

For the first half of the tournament, it looked like it was Hackney’s tournament to lose.

“In a lot of ways, I think what Rick Clunn did on Saturday took the pressure off me,” said Hackney, who spent the week fishing for bedding bass with a topwater prop lure, a jig and a drop-shot rig. “If I had gone out today in the lead, I would have been a nervous wreck.

“But I knew all I could do today was catch what I could catch — and I’m thrilled with the week I had.”

Hackney was one of several pros — all of those who fished on Sunday and many who didn’t — who crowded around the weigh-in platform to watch Clunn make history.

With his first win coming 39 years ago, Clunn also easily set the record for longest gap between his first victory and his most recent.

“I know I got a lot of support online last night from the over-60 crowd, and that sure means a lot,” said Clunn, who has four Bassmaster Classic titles and more than 400 total B.A.S.S. events on his resume. “Thank goodness there are lots of Baby Boomers. I may have the biggest fan base of all.”

Clunn was awarded $1,000 for the leading the Toyota Bassmaster Angler of the Year points race at the end of the event.

Marty Robinson earned the Power-Pole Captain’s Cash award of $1,000 for being the highest-placing angler who is registered and eligible and uses a client-approved product on his boat.

Hackney earned the Livingston Lures Leader Award of $500 for leading on the second day.

Dick Cepek Rolling Forward Award of $1,000 will be presented to the angler who makes the largest gain in Toyota Angler of the Year points from tournament to tournament and will be determined after the Huk Performance Fishing Bassmaster Elite at Winyah Bay.

The Big Bass Award of $1,500 was presented to Cliff Prince for weighing in the overall biggest bass of the event — a 10-8 bass.