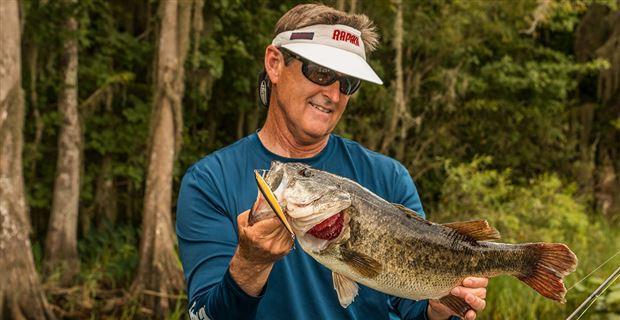 The floating jerkbait could easily be considered a hidden gem of the lure world. Although many of us enjoyed incredible success on these lures throughout our childhoods as we explored the banks of local ponds and streams, they’ve become largely overlooked in recent years.

According to Elite Series pro Bernie Schultz, however, the floating jerkbait is one of the best year-round bass fishing lures an angler can possibly use. Whether you’re targeting spawning fish, elusive winter fish or anything in between, this lure will consistently produce impressive limits.

Before we explore the various seasonal applications of the floating jerkbait, it’s important to understand what makes it so effective. According to Schultz, it all boils down to one word: Versatility.

“This is a true year-round lure,” Schultz said. “There aren’t too many good near-surface hard baits that can make the same claim. In the spring through the fall, it can be used at the surface or as a twitch bait and in the winter and summer months, you can easily weight it in order to make it suspend on the pause. With one lure, you’re able to cover a large section of the water column depending upon the conditions.” 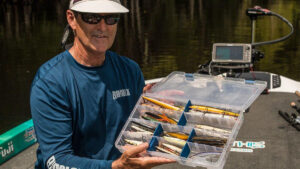 Schultz’s favorite floating jerkbait is the Rapala Original Floaterâ€”perhaps the most popular and time-tested lure of its kind. Its side-to-side action coupled with its subtle rolling tendencies make it an attractive choice for anglers of all skill levels.

“The Original Floater has a dual action of which many anglers aren’t aware,” Schultz said. “Not only does it move from side to side throughout the retrieve, but it also rolls on its sideâ€”we call it the ‘Rapala roll’. Essentially, visualize the body axis rolling to one side and all the way to the other, but at the same time kicking to each side. The balsa construction facilitates this unique behavior, which is why it hasn’t really changed much in 65 years.”

As the days become shorter and the cooler nights make their arrival, baitfish begin their annual migration to the backs of creeks and, of course, the bass are hot on their tails. This autumn feeding frenzy can set up quite nicely for some stellar floating jerkbait action.

“The first consideration is going to revolve around matching your floating jerkbait to the size and coloration of the prevalent forage,” Schultz said. “This time of year, there’s going to be a dominate forage species on which the bass are focusing. It could be shad, perch, shinersâ€”there’s always a primary target. So when you initially begin your dissection of a fishery, identifying the forage should be your first order of business.”

Because fall is schooling season, Schultz makes a concerted effort to find the areas where the feeding opportunities are the greatest. He utilizes both his eyes and his Raymarine electronics to determine his plan of attack.

“I’m essentially looking for schooling activity either on the surface, near the surface or below the surface,” Schultz said. “That’s how I break it down. Then, I cater my cadence to those clues.”

When bass are busting bait on the surface, it’s often a matter of simply getting your floating jerkbait to the fish. Schultz will make a long cast to the activity and let his bait sit completely still on the surfaceâ€”sometimes that’s all it takes. But it that doesn’t work, he’ll simply give the lure erratic movements with downward twitches of his rod to elicit a reaction strike.

“If they’re aggressively chasing bait, it can be hard to do anything wrong with a Floater,” Schultz said. “But if they’re being finicky, experimentation is necessary. They’ll absolutely eat a floating jerkbait, but you just have to figure out their preferred cadence. I’ll use a ‘jerk, jerk, pause’ cadence and I’ll also try a steady reeling retrieve. As long as you keep it on the surface, you’ll crack the code.”

Bait on the surface but no bass

If you’re seeing schools of bait on the surface without any bass activity, don’t worryâ€”the bass aren’t far. Schultz suggests using a slower cadence in order to mimic an injured baitfish and draw bass towards your offering.

“When they won’t eat a steady jerking retrieve with no pauses, I’ll let begin pausing my lure between every other jerk for a few seconds,” Schultz said. “You can also make your jerks less aggressive to further coax them. Basically, I’m going to slow everything down until they tell me what they want. More times than not, whatever cadence gets the first fish to bite, will get the next fish to bite.”

Although the words “floating” and “winter” don’t often go together in the winter months, Schultz has enjoyed some outstanding catches by utilizing an old-school tactic taught to him by legendary anglers Dion Hibdon, Guido Hibdon, Randy Moseley, Randy Blaukat and Stacey King.

“You can take a weighted 13, 14 or 17-sized Original Floater and catch some monsters on bluff banks throughout the winter,” Schultz said. “There’s a whole faction of fishermen who know that, but a lot of the younger guys haven’t heard of it. Of course, we used to drill holes in ’em and insert bullet weights to add weight, but now you can simply add Storm SuspenDots or Storm SuspenStrips right in front of and right behind the front hook hanger to achieve the same result.”

To optimize your chances of success, you’ll need to utilize a painstakingly slow approach in order to match the lethargic mood of winter bass. Schultz makes long, quartering casts to bluff banks or subsurface timber, allows the weighted Floater to reach its maximum depth and utilizes super-long pauses.

“Your twitches need to be subtle and your pauses will be up to 20 or 30 seconds,” Schultz said. “It’s laborious and tedious, bit it’s ridiculously effective. You didn’t see many 25-pound winter bags back in the day, but when you did, they were often caught using this technique. And trust me, it works just as well today.

As spring bass begin moving towards their spawning grounds, they’re notorious for holding tight to cover such as flooded brush, cypress trees, lily pads and grass lines. Fortunately, these are ideal places for using a floating jerkbait.

Schultz doesn’t use this lure to cover water quickly in the spawning periodâ€”it’s a much more detailed approach. It’s not as much about reaction strikes this time of year, but rather drawing the fish towards the bait.

“I usually choose a 9, 11 and 13-sized Floater throughout the entire spring,” Schultz said. “I’m looking for a smaller profile and I’m not trying to get the bait down to any particular depth. It’s all about shallow water. The tougher the bite and the smaller the bass, the more likely I’ll be to use a 9, but the sizes I use most frequently are the 11 and 13.”

During the post-spawn period, when the females are off the beds and the males are guarding fry, fishing down long stretches of bank with floating jerkbaits can yield some impressive results. They don’t see this profile and action very often and its lifelike action is quite believable to territorial bass.

“You’re looking for bass that are either guarding fry or still protective of a particular bedding area,” Schultz said. “We’re talking about fish that have gone into an area for spawning and staked claim, so they’re going to attack any intruders. Your presentation won’t be any different than the spawn; look for high percentage, shallow-water targets near potential bedding areas and experiment with surface or near-surface retrieves.”

When summer rolls around, the fishing can get tough. But Schultz has learned that an aggressively fished floating jerkbait can draw reaction strikes from stubborn, warm-water bass.

“This is when your cadence should become more aggressive,” Schultz said. “They’re starting to leave the banks and you’ll probably be forced to cover more water. Primary points, secondary points, grass lines, submerged grass beds and docks become your most high-percentage targets. I’ll also start to use the modified slow-rising or suspending models during this period and concentrate on the 4 to 6-foot range. If you cover water efficiently, you’ll get some really nice bites with these lures.”

While you can certainly “get away” with using generic equipment when fishing a floating jerkbait, Schultz has discovered a few particular subtleties that can make for a more successful experience.

Most floating jerkbaits can be fished with either casting or spinning gear. If you’re using a lightweight balsa lure, however, your setup can be a bit more important.

“If I’m using the smaller Floaters such as the 5 or 7, I’ll probably opt for spinning gear because they can be a little challenging in terms of casting distance, especially in the wind,” Schultz said. “But I’ll certainly use a casting reel if I feel I can cast it effectively. You’ll probably find that a 7-foot medium or medium-heavy action rod will work best for this technique with both setups.”

Schultz makes a point to use lighter line when fishing a floating jerkbait in order to give the lure as much action as possible.

“I primarily use 8 to 10-pound line, but I’ll occasionally bump it up to 12-pound test if I’m around particularly thick cover,” Schultz said. “When I’m fishing the lure on the surface, I use Sufix Superior copolymer due to its increased buoyancy. If conditions dictate a sub-surface approach, I’ll use fluorocarbon line, such as Sufix Invisiline Castable Fluorocarbon.”

Although it’s largely dependent upon a fishery’s primary forage, Schultz has found confidence in two particular colors in most situations.

“Most of the time, i’m using silver or gold with a foil finish,” Schultz said. “These two colors are an excellent starting point for those who are new to the technique. They’ll work just about anywhere.”

The next time you get on the water, don’t forget about the effectiveness and versatility of the floating jerkbait. They may not be the “sexy” choice, but they’ve caught giant bass for decades and will continue to do so.