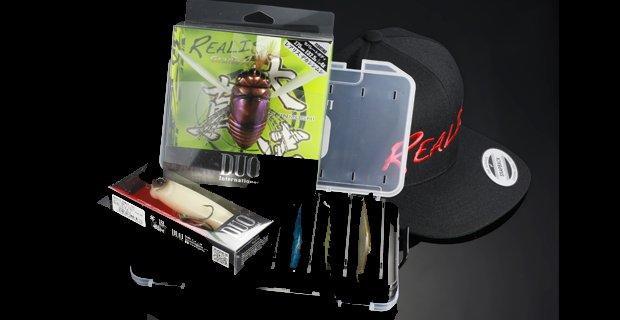 Just a few short years ago DUO Realis helped create a technique called spybaiting that took a sinking prop bait they call a G-Fix and made it mainstream. It has already won some major championships and our staff has seen it make a huge difference when the bite seemed non-existent.  Kevin VanDam used it to win the championship at Major League Fishing and recently Chad Grigsby broke a record at FLW with it on smallmouth at Lake St. Clair. Both smallmouth and largemouth love this bait!

It is a finesse technique that takes the subtle side to side wobble and prop flash front and center to almost a power approach. The sultry sinking action of the G-Fix gets some ferocious hits and it works best in clear water.

In our latest giveaway, we are going to mix it up a bit and give you a chance to win a set of their spybaits in three sizes, a reversible lure box and another great walking topwater lure called a Pencil 110 and cicada look-alike called a Dekashinmushi. A great taste of what DUO Realis is all about.

Congratulations to the winners, your lures are on the way! Thanks for entering and as always, keep an eye out for more weekly giveaways from the Wired2Fish guys.