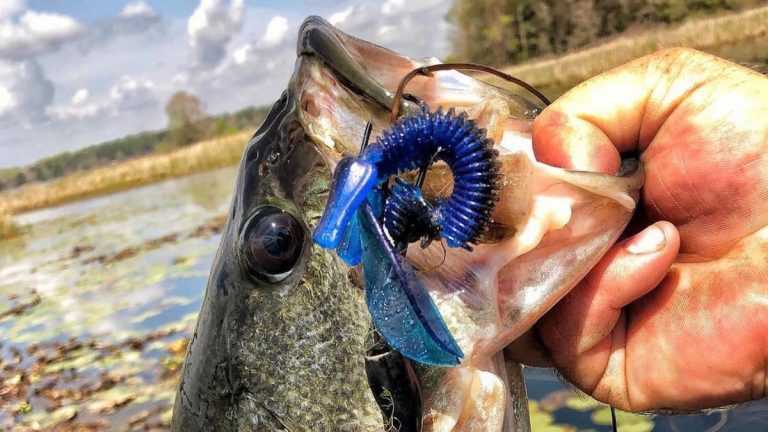 Tactics in fishing come and go in phases. For a while, big flutter spoons were all the rage for summer ledge fishing and then the pressure seemed to diminish its effectiveness. The Whopper Plopper was exposed on a national scale and the fish were conditioned to it rather quickly. The A-Rig lost its magical powers after the masses started lobbing it all over every puddle in the country. All of these baits still work, but they become tools better utilized by skilled anglers who are able to modify the technique and apply it skillfully and a bit differently to still trick fish that are slightly less educated, conditioned and pressured.

The same can be said for punching. The golden era of punching seemed to come along when guys like Randall Tharp and Brandon McMillan were duking it out in sunny south Florida while the rest of us had nothing to do but watch. We were holed up with cabin fever trying to make our way through the winter, all the while watching guys flip over into a pile of Shrek ears and haul out monster bass. I’m referring to hyacinth, which has always reminded me of Shrek’s ears for some reason.

The blinders were taken off 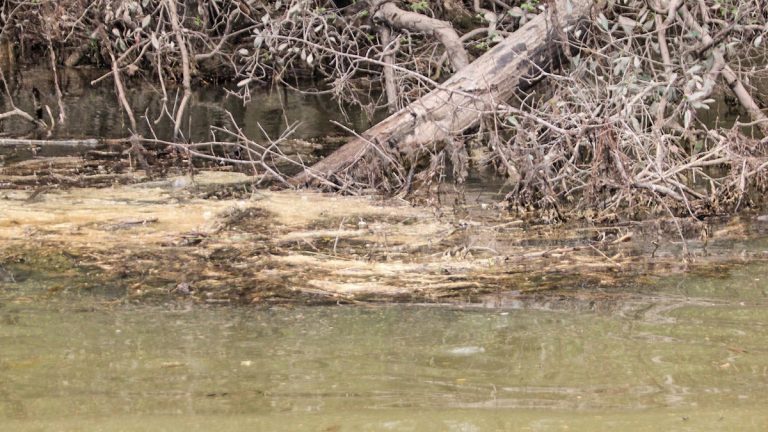 The training wheels for most anglers wanting to punch came off after that. Sure, other hammers like J.T. Kenny, Ish Monroe and the Lane brothers had been punching hyacinth for years. Hyacinth was no secret to local Florida boys like Trevor Fitzgerald and Rich Howes. But the blinders were taken off of the masses in the country, just as the masses were becoming more and more interested and involved in fishing. Suddenly, thousands of anglers were making the pilgrimage to south Florida in the winter to escape the cold and soon every ear of hyacinth had 1 1/2-ounce of tungsten raining down on it. The bite dwindled.

The bite still worked, but mostly in the hands of skilled anglers capable of modifying it. Guys like Brandon McMillan and Randall Tharp. I remember watching this duo duke it out in 2011 on a stretch that other anglers were passing right by in search of “the juice”. No hyacinth to be seen on that stretch. Just the occasional mat formed from an assortment of floating vegetation that had been piled up by the wind; all drifting around until one piece inevitably caught on a clump of reeds. Then the accumulation of others over time. Some reeds that had been torn from the bottom, maybe a little hydrilla or eel grass.

Simply put, it was just a pile of junk.

That’s the stuff that other anglers were overlooking, and still do to this day. Junk mats. Both Brandon McMillan (the eventual winner) and Randall Tharp (the runner-up) broke the century mark that week flipping junk mats.

The fish aren’t as picky as you think 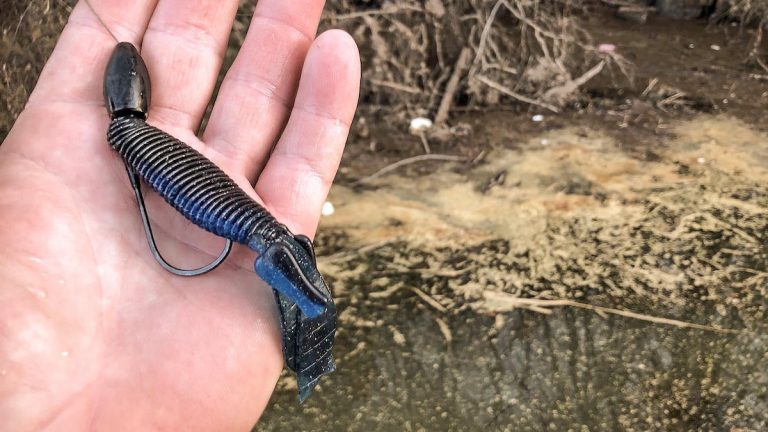 The fish don’t care what it is so long as it covers their heads. Sure, hyancith is fantastic and perhaps the best mat off all due to its root system that hangs down and provides perfect cover for bass to ambush prey while still feeling protected. But a floating dock doesn’t have roots and fish still like to get under it. The point is, bass love something overtop of them. They’ll get under anything. Something as thin and simple as a sawdust or pine straw mat is always worth punching.

In places like Florida, with vast flats of shallow vegetation, outboard motors and trolling motors will dislodge a lot of vegetation that will inevitably pile up and form mats. So you can often find several junk mats to flip and form a pattern out of it.

No matter where you fish, you might find ’em 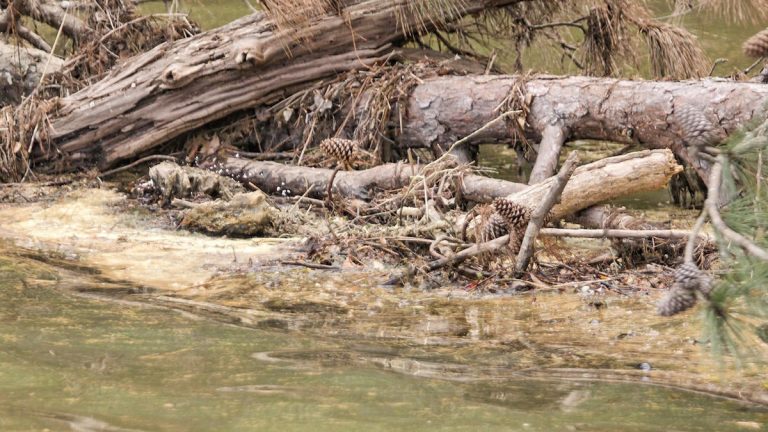 What you’ll find with punching junk mats outside of Florida, the Cal Delta and a select few other places, is that it’s often more like fishing that one stick-up on a flat in the fall months. Where punching mats, even junk mats in Florida, is more like fishing a bank with 20 laydowns. What I mean by that is most junk mats are very isolated around a lot of the country. There will be one random trash mat in a river where the current has pushed a lot of leaves, sticks and other debris into a treetop. That’s worth punching even if it’s the only thing you’ll punch all day. That’s why you always want to have a punch rod rigged up and in the rod locker, if not on deck.

I have caught a couple fish punching on Lake Martin over the years. There is likely no lake in the country that sets up more poorly for punching than Martin. It’s deep, clear and sparse when it comes to any kind of vegetation. However, there have been two instances to be exact where the stars aligned, a junk mat formed and I dobbed an 1 1/2-ounce VMC Tungsten Flippin Weight with a Missile Baits D Bomb rigged on 65-pound braid over into a mat on Martin and pulled out two critical tournament fish.

Always have a punching rod ready 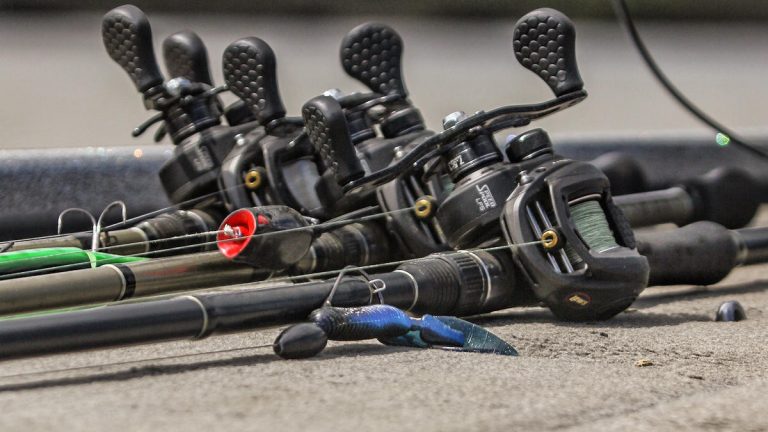 I once asked Tharp if he ever took his punching gear out of his boat. He told me that he had, once. He was fishing a highland reservoir with little to no shallow cover outside of rocks, wood and docks. He thought to himself “Why am I lugging all this extra weight around?” and decided to take it out of the boat. The next day he ran way up a river where he encountered multiple saw dust mats. He attempted to get a bait through but was unsuccessful. The next day he returned, punch rod in hand, and caught several solid fish.

“Never again,” Tharp remarked as to whether or not he had or would leave the dock again without his punching setup.

Punching isn’t just for hyacinth and hydrilla. Punching isn’t just a tool to be used in The Sunshine State or in big-fish factories. But punching does draw big bites and can be an essential tool in adding that one big fish to your bag. It’s a tool that does a job no other tool can. It allows you access to what lies beneath the thickest and densest cover you can find.

Even when that type of cover shouldn’t be available and you just stumble upon it; when others would see it and just write it off as junk. That’s why it’s a good idea to always keep a punch rig ready, because sometimes that’s the best place to punch them-right in the junk.