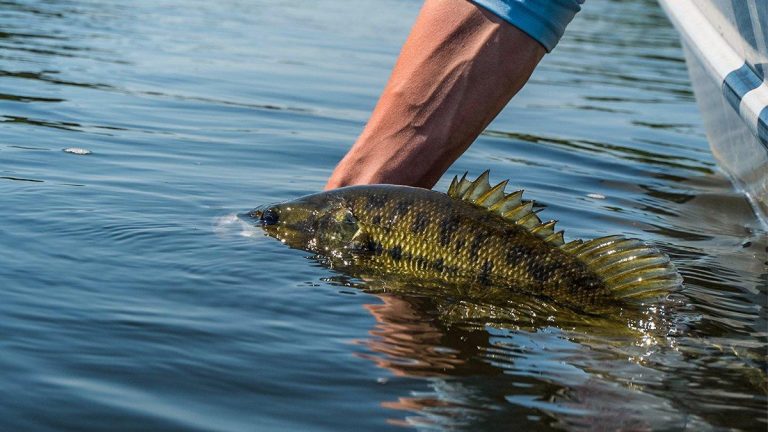 Earlier this spring, I had the opportunity to fish for spotted bass on the legendary Coosa River in Wetumpka, Ala. During these two days of fishing, I not only caught a new personal-best spotted bass, but I also learned a lot about targeting bass in situations with current.

My main takeaway was the “3 Level Rule” of current fishing, which helps you choose the most productive areas of any river or stream based on the water movement. If you can learn how to properly fish each of these three situations, there’s a strong chance you’ll enjoy a lot of success.

In the vast majority of current fishing situations, the bass are going to be in one of three areas: In the current, in the slack water—or eddy—created by the piece of structure, or somewhere in between, passively feeding or transitioning to a different area.

Level 1: In the current 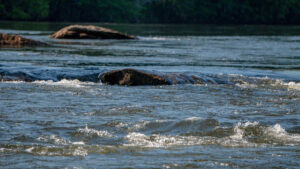 It’s important to understand that bass cannot hold in swift current all day; they simply don’t have the energy. It would be similar to a human running on a treadmill for 24 hours a day. That’s insane, right?

Bass must take breaks to sleep, rest and regain all of the energy they burn while feeding and moving in current. This is why casting directly into the strongest current may not be the best strategy. When bass are positioned in direct current, they’re most likely traveling from eddy to eddy, searching for their next resting spot or ambushing unsuspecting bait balls floating helplessly down the current.

Keep in mind, however, that bass are lazy animals; they will take the path of least resistance whenever possible, so they’ll spend much less time in “level one” compared to the others.

You’re also likely to find fish positioned in the slack water—or eddy—created by a piece of cover in the water. These current breaks are created by features such as branches protruding from the bank, a pile of rocks or large individual rocks. Even grass patches and weed lines can create breaks in the flow of current.

Fish will use these eddies to rest from the current, often waiting on shad or crawfish to be swept down the river. They can then shoot out quickly, grab their meal and return to the calm water to repeat the cycle throughout the day. Their prey may just float by, but can also drift into the eddy to rest, not knowing it may be the last rest they ever take.

“Level two” bass are the easiest to target, as you’re often casting to a very small, visible area. The slack water will allow you to feel your lure and set the hook much easier than fishing in the current itself.

When approaching these current eddies, it’s tempting to troll right up to the rock or laydown and start pitching. You may not realize, however, that there’s often more than meets the eye and there may be more cover you can’t easily see. If you start farther from the eddy and fish the area just down-current from what you can see, you may be surprised by how many fish you can catch in a small area.

While fishing on the Coosa River, my friend and I tried to catch fish in the current breaks and in the current itself, but we found neither the quality or quantity of fish we were expecting. That is, until we started to target the areas with more subtle current. When we began fishing these areas, the action was incredible.

Bass, being a bit smarter than we give them credit for, will often do a little bit of work on their end for a giant payday of food, especially when they’re hungry.

The crawfish were spawning on a full moon and it was the first time this year that the crawfish had really moved out of the rocks and into the current. This made for easy, quick meals for the bass. But due to the location of the crawfish in the slow current, the bass had to keep themselves in that current to gather as much food as they could. The bass in this third category are often the most fun to catch, as they are actively hunting, unlike the bass mentioned in the first two categories.

Bait choice No. 1: Scrounger is hard to beat

In most rivers and streams, your bass are going to be feeding on small-sized shad, crawfish or both simultaneously. These two types of forage are best suited to survive in current as opposed to other common bass forage species, such as bluegill.

When imitating these bite-sized shad, I most often choose a scrounger head with a small swimbait trailer. The scrounger has become a big-time ledge fishing bait on larger bodies of water, but it can be applied to any shallow, current-oriented situation as well.

In my experience, the water displacement created by a scrounger tends to outperform traditional swimbait setups due to its ability to attract attention. It emits an intense vibration, similar to a bladed jig or crankbait, which allows current-oriented bass to find it with less effort. My favorite combination is the Jenko Fishing Tennessee River Tremor Jig Head, paired with a 3 3/4-inch Strike King Rage Swimmer. These two choices imitate most intermediate-sized baitfish and can be used throughout the country.

The scrounger really finds its place on my deck in levels one and three, when the fish are actively feeding or traveling. It can be fished very quickly, allowing you to cover a lot of water, which increases your efficiency throughout a day of fishing. When retrieving the scrounger, I use a constant retrieve with intermittent pops and pauses.

Bait choice No. 2: Finesse jigs for the crawfish eaters

When crawfish are on the menu for current-oriented bass, you’d be hard-pressed to find a better imitation than a finesse jig. The profile and build of a finesse jig allows you to work it in and out of cover easily, while also maintaining a good hookup ratio due to its small profile.

You’ll have a lot of success with a finesse jig when the bass are sitting in slack water created by cover. Your high-percentage areas are going to be those you can see and cast to. I have also caught several quality bass with a finesse jig in moderate current, but for the most part, my bigger bites come in the eddies.

When retrieving your jig, imagine what a crawfish would do when it’s caught in the current. Crawfish don’t have much control over their bodies due to their rigid exoskeleton, so as soon as they get caught in the flow, they essentially have no choice but to ride along, bumping along the bottom. If you feel a slight change in tension, it’s time to set the hook. Bites are often characterized by complete slack; this happens when the bass initially bites the jig and retreats back into the eddy to finish its meal.

Current can be a major key to finding large populations of bass throughout much of the year and to be quite honest, it scares a lot of anglers away. If you can crack the code and figure how what to target and which lures to use, there’s a great chance you’ll have this special bite all to yourself.