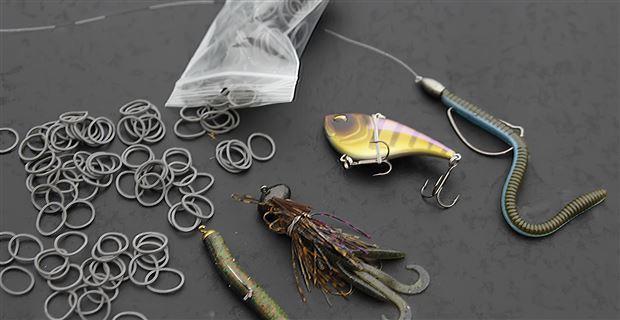 We all appreciate simple fixes to common fishing problems. Fishing should be fun, but at times, it can be frustrating when you’re dealing with constant little annoyances with tackle or artificial lures not staying rigged properly. For things that annoy us in fishing, there are many ways to work around. A lot of guys keep super glue in their boat to solve a lot of problems. But I’ve found a real simple, cheap and mess free item anglers should keep on hand for a lot of common fishing problems or to give yourself some new options.

A rubber band can solve a lot of fishing problems and make some old fishing lures, act like new.

I’m not talking about big rubber bands, although those can work, but those crafty making bracelet making rubber bands you can find at Walmart and just about any craft store in multiple colors and buy one bag for about a buck that will last you many fishing seasons.

Here are a few simple solutions with small rubber bands for your common fishing needs: 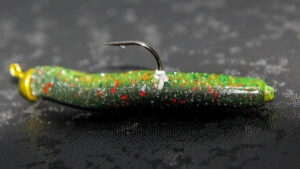 Hold plastics on the hook

One common problem when fishing with soft plastic lures in both bass fishing and crappie fishing is when the plastic starts slipping off the hook or jighead and keeps getting out of position so you’re not presenting the lure in a realistic manner anymore to the fish. Terry Scroggins showed us a cool trick to tie a uni knot to hold plastics in place. A rubber band works equally well and a lot quicker for a lot of folks.

Take the rubber band and wrap it around the shank and then pull one loop through the other and cinch it down. Pull it real tight and then cut it with some tag end left. You can do it twice to make even a tighter connection. It won’t slip and it will hold your plastic up on the hook. I’ve used it to hold crappie plastics on a jighead and flipping baits on a big flipping hook after the head gets torn out after a few fish. 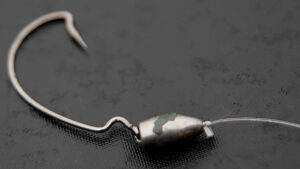 A rubber band can peg a sinker

You can use a rubberband to peg sinkers like bullet weights on plastic worms or even make a finesse carolina rig keeper.

Same deal, loop the rubber band around the line and pull one end through the other and pull tight above the weight. Maybe do it a time or two. The rubber band won’t hurt your line and will hold pretty well. You can do it above and below a small barrel weight on your line to make a finesse carolina rig as well. 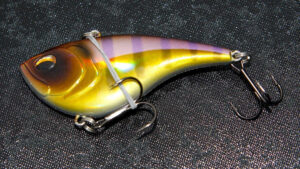 Pin a hook back or up

You can use a small rubber band to pin a hook back on a crankbait or other hard bait to keep it tucked and out of the way.

Sometimes I’ve cut the bottom treble off a front treble hook, pinned the hook to the bait with a rubber band to keep the hook back and out of the way to make it more snagless around cover. I will usually just double the rubber band around the body of the bait and slide it over the hook to pin back. If I want to be really more snagless, I just clip the bottom facing treble off. 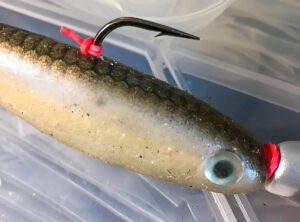 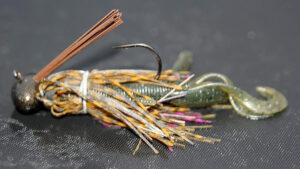 Give jigs a new profile

I’ve seen some finesse jigs that looked pretty nifty with a rubber band pulled down over the skirt to make them a little more stream lined without that spider cut collar look. You can get a more finesse presentation without having to cut a skirt that you can’t uncut later when you want a full skirt. 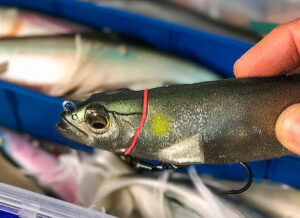