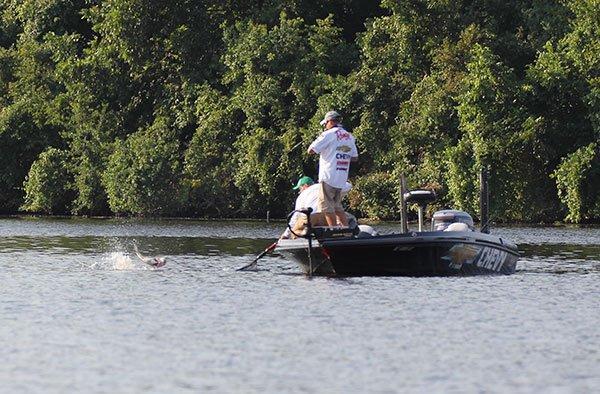 Not all anglers have found the sweet spot for big bass on their favorite fishery, but one thing is for sureâ€”we all fantasize about it. Although most of us work towards that magical moment for an entire lifetime, it doesn’t mean it’s impossible.

Chevy pro Bryan Thrift is just like usâ€”he has an unquenchable thirst for big bass. Throughout the 2013 Forrest Wood Cup on the Red River, we spent a lot of time chronicling his days on the water and found his approach both different and thought-provoking. While others covered miles of water, he routinely spent hours at a time on a 50-yard stretch of bank, searching for one giant bite. In 4 days of competition, he caught 3 bass weighing almost 18 pounds from the small area.

According to Thrift, there are a few things we can all do to help our chances of finding our own big bass honey holes.

If big bass were easy to catch, we’d all be touring professionals. Unfortunately for us, they don’t get big by being dumb. Thrift has noticed, however, that there are 2 environmental requirements areas must have in order to host the bass of a lifetime.

“If I’m looking for an area that will hold multiple kicker fish, bait and adjacent deep water are absolute necessities,” Thrift said. “Deep water makes giant bass feel secure and they will seek areas that provide quick access to an easy meal.”

Whether it’s the steep side of a point, a nearby creek channel swing or a river bend, big bass congregate in these areas. While they can be inactive and fairly unmolested in deep water, these areas allow them to slide up and feed without exerting much effort. Just as many of us will sit as close as possible to a restaurant’s buffet, big bass behave in the same manner.

Timing is a huge factor

Most anglers target specific pieces of cover and structure when searching for big bass, but Thrift has an entirely different train of thought. He most often notices the biggest bass keeping their distance from these areas.

“True giantsâ€”like 8 and 10-poundersâ€”don’t sit on structure very much,” Thrift said. “They’re usually in the area, but the only time they’ll actually pull onto specific structure or cover is when they’re actively feeding. This is why castable umbrella rigs have been producing so many giant bassâ€”they’ve given anglers a way to effectively target these suspended, big bass.”

Fishing for suspended bass is difficult, so Thrift would rather target these big bass when they’re most gullible during their small feeding periods. In order to do this, he believes timing is everything.

“I think big bass stray away from competition, which is why you rarely see schools of 6-pounders,” Thrift said. “I catch more kicker fish 30 to 40 feet away from brush piles than I do inside of them. So when they move up onto more predictable cover and structure to feed, you’ve got to be there waiting for them.”

We witnessed Bryan using this game plan at the Red River. He would only fish his most productive area for 10 or 15 minutes, but that’s all he needed to get a feel for the situation.

“You’ve got to be persistent and keep hitting the area,” Thrift said. “More often than not, it will only take 15 minutes to catch a giant if they’re feeding. If it takes longer than that, your timing isn’t right and you should try again later.”

If you’ve found an area with a large population of bait and deep water nearby, don’t give up on it too easily. As stated earlier, big bass don’t feed all day, so an hour can make a world of difference.

“If I catch 2 or 3 good ones and it shuts down shortly after, I’ll come back every hour throughout the day,” Thrift said. “You can definitely over-fish big bass areas and really mess up an otherwise perfect spot. You need to let your best areas rest without forcing the issue.”

When first approaching a big bass area, Thrift likes to start by throwing reaction baits in order to catch the most aggressive fish. He warns, however, that this approach can often hurt more than it helps.

“Usually I try to start with reaction baits, but you’ve got to be careful with it,” Thrift said. “Sometimes catching a bunch of random ‘stragglers’ can lead you astray and get you off the school. This approach can make it tough to pinpoint the sweet spot.”

After a short stint with reaction baits, you’ll often see Thrift break out a shaky head. Although it’s not necessarily billed as a big fish technique, his reasoning makes a lot of sense.

“I can’t count how many 6 and 7-pounders I’ve caught on a shaky head,” Thrift said. “I don’t mind playing the numbers game. In my opinion, the more bites I can get in a single day, the better chance I have of running across a giant. You may catch some peanuts, but your next cast could be the kicker you’ve been waiting for.”

Fishing for big bass isn’t a science and it takes years, or even decades, to master. Even if he’s convinced the bass are in a specific pattern, Thrift always takes time to try something totally different.

“It doesn’t matter what lake you’re fishingâ€”there will always be big bass doing something they’re not supposed to be doing,” Thrift said. “If you’re catching average-sized fish on points, try to make your way into some really skinny water or vice versa. If you can find these rogue big bass, you’re going to do well in any tournament because you’ll have them to yourself.”

Thrift proved this point at the 2013 Forrest Wood Cup. While the majority of anglers were trudging through shallow, backwater slews, he spent most of the day with his boat sitting in 20 feet of water. This unique pattern led him to a third-place finish and a $60,000 payday.