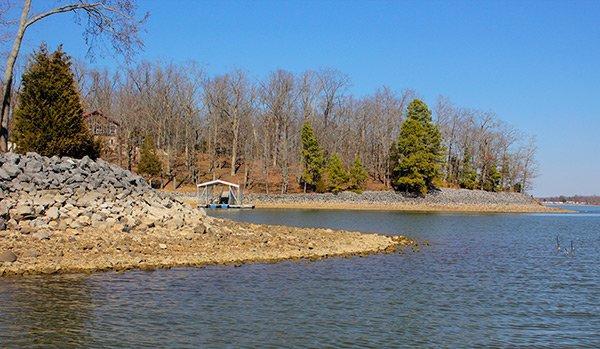 We spend a bunch of money on boats and tow vehicles in an effort to get away from the bank in bass fishing. But then we hop in the boat and go right to the first bank and start fishing. The boat simply enables us to fish a lot more banks than we could by foot because of accessibility. But choosing the right bank for bass fishing is not random or luck in the opinion of most good anglers.

We picked the brain of FLW Tour pro Terry Bolton of Paducah, Ky., and he gave us several tips for choosing the right bank to fish in the spring. The factors that affect his decisions on banks vary based on the following criteria:

Angler or slope determined by temperatures

“I think that dirtier water makes them more comfortable about being up shallow, and it makes them easier to catch.”

When Bolton begins his search for bass moving out of their winter locations in the early spring and early prespawn periods, he starts with steeper banks.

“I think when the bass first start up to their spring locations, they want to still be close to deep water, like they know it’s going to be cold again soon.”

The bass will move into those banks with 45 degree angle slopes or sharper where they can move up shallow and forage for short windows and then slide back out deeper to rest in the cold water.

As it warms up the bass will get more comfortable on those flatter or shallower sloping banks.

“A channel swing bank can be really good in the spring,” Bolton said. “You have the steeper deep sections that are good early. Then you have those tail out ends where it goes off the end a lot shallower and flatter. So the bass might be in the deep part of the swing early in the spring and then move up to the tail sections where the channel swings away from the bank.”

Choosing the right banks for bass fishing in the spring can be as simple as finding the right rock and angle of slope.

Rocks can be your best clue

You can pattern the bass on a lake or in a major creek arm of a large reservoir by paying close attention to the types of rock on the bank.

Early on, Bolton likes to find big Boulder or maybe head-sized chunk rock on a bank. That typically indicates a steeper grade and deeper water on the bank. As the water warms and he starts targeting bass on flatter shallower banks he will gravitate to more pea gravel type substrate.

Isolated rock, however, will still be a big deal as we’ll discuss in a moment.

Rip Rap can be a great place to find bass in spring. These man made rock walls can often hold bass throughout the entire spring. Learning to work up and down the rocks is key. During the low light hours or colder parts of spring, the fish may position on the deepest parts of the rip rap.

While on warm sunny days or later in the afternoon, they may slide up the rip rap and position just under the surface on the shallowest parts of the wall, where the rocks have absorbed the suns warmth.

“Creek arms hold populations of bass all year, so you can start in one creek and follow the different types of banks until you find the bass,” Bolton said. “I always look for rock transitions this time of year. Where it maybe goes from boulders to gravel or chunk rock to smaller rock. These can be good because the bass may sit in one type to warm up and then feed in the other type. So finding the edges where it changes can be great places to look for bass.”

Here is a rundown of what Bolton has on the deck fishing on rocky lakes devoid of grass this time of year:

“I like to find stained water this time of year,” he said. “I think that dirtier water makes them more comfortable about being up shallow, and it makes them easier to catch. If I can’t find dirty water and the water is real clear, I want to find the banks with wind on them to break up the water so they don’t get as good a look at my crankbait or spinnerbait.”

Dirty water is something some folks will run away from. But not me. And certainly not Bolton. Anything that makes it where the bass can see your bait but can’t get a great look at it, improves the odds in your favor.

Early in the spring when bass first start moving to their spawning areas, Bolton focuses on banks closer to the main lake or main lake locations like points, bars in the mouths of bays, and creek channel ledges leading to spawning areas.

As the water warms he will work back further into creeks and pockets focusing on channel swing banks, secondary points and banks leading into spawning areas with transitions rock and additional cover.

Cover can refine your bank search

Bolton doesn’t seek out specific cover in the early prespawn, late prespawn, spawn or post spawn periods, but the presence of cover is on his mind.

“I won’t necessarily choose a certain bank because there is a certain type of cover on it, but having additional cover on the right banks makes them that much better,” he said. “I used to love targeting man-made structures like concrete ramps, docks and those boat rails that locals will use to launch a boat in their back yard. Pieces of cover like a shallow brush pile, a stump or a laydown can give those big bass a place to setup on those banks in the spring and make them easier to target.”

The accepted norm is that when the water is real cold in the early spring, later in the day is often better, especially on sunny days. Bolton finds this to be true most of the time. But he also finds that the time of day puts the bass in different places on the same bank.

“You might catch them on a 5 to 8-foot diving crankbait in the early hours of day but by the late afternoon, you might have to get out that smaller Shad Rap or Arashi 3 and fish in water less than a foot deep to catch those same fish. The warmer water can get them really shallow late in the day.”

Bolton cautions though that anglers shouldn’t be to rigid on their selection of baits and where they target the bass on banks just based on time of day.

“I can’t explain it exactly, but I’ve found a lot of times there will be big ones up real shallow on a bank real early in the morning, even though the water is the coldest. I don’t know if the rocks hold heat over night and that makes the shallows a degree or two warmer over night or if they are just moving up to feed in a small window first thing in the morning and again later in the day.” 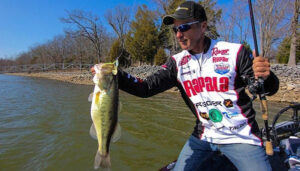