Lipless crankbaits are a great remedy for tough wintertime bass fishing. With these ultra-lifelike baitfish imitations accounting for a large percentage of winter’s biggest bass, the secret is out—they’re some legit, fish-catching lures. There are, however, a few caveats to be mindful of before tying one on in search of a coldwater giant.

Alabama fishing guide Tim Chandler relies on the effectiveness of lipless crankbaits throughout much of the winter. Regardless of his clients’ skill levels or the conditions, he won’t leave the boat ramp without them.

According to him, understanding a few key concepts will dramatically increase your success with these time-tested bass lures.

You want a wiggle, not a wobble

It may sound like a tongue twister, but it’s actually an important concept to understand in regards to wintertime lipless crankbait fishing. Plainly stated, both the bass and their forage are downright cold right now. The bass aren’t likely to travel great distances to feed and their prey—in this case, baitfish—are simply fighting for their survival. To increase your catch, it’s important to make your presentation blend in with such widespread inactivity.

“When the water reaches the low 40-degree mark, baitfish activity almost reaches a standstill,” Chandler said. “They won’t move very much and when they do, they’re going to move slowly and swim in a very subtle manner, just barely moving from side-to-side. A lipless crankbait is a near-perfect imitation of this behavior because it has an extremely tight wiggle as opposed to the wider wobble of a crankbait.”

In addition to emulating lethargic bait behavior, a lipless crankbait’s delicate swimming action also emits a faint flash of color with every movement. In a bass’ eyes, this color flash is indicative of an injured shad and an easy meal.

“A lot of shad die when the water turns frigid,” Chandler said. “As they die, they flutter to the bottom and the bass take advantage of it. When you make your lipless crankbait move, the bass easily mistake its color flashes for a dying shad, which is why it’s so incredibly effective this time of year.”

It’s always important to cover water efficiently when developing a productive bass fishing pattern but efficiency plays a paramount role when finding winter bass. Lipless crankbaits give you the ability to fish quickly in hopes of finding a giant group of fish.

“Lipless crankbaits allow you to do two very important things,” Chandler said. “You can cast them a mile and you can retrieve them quickly. When you don’t have to spend much time between casts, you’ll be amazed at the amount of water you can cover in a day. When you catch a bass in the winter, there’s a great chance there are more with it. Lipless crankbaits may not catch every bass in the school, but they’re outstanding at triggering the most dominant or active ones.”

The right size makes all the difference

An honest error in your lipless crankbait size selection can be the difference between a big goose egg and a day to remember. Chandler considers two primary factors when deciding which XCalibur Rattle Bait to use.

Sizing ’em up: Chandler uses this simple system to match his lipless crankbait size with his target water depth.

“It’s an old cliché in the fishing world, but it’s true—you have to match the hatch,” Chandler said. “You don’t want to throw a huge lure when most of the bass’ food is two inches long because it just doesn’t look natural. If you don’t know the forage size, an Xr50 is a great middle ground to begin with. If you start catching fish over three pounds or notice bigger forage, bump it up to the larger Xr75.”

Chandler also carefully considers the depth at which he’ll be fishing. He’s developed a system that makes his selection process very easy.

“When I’m fishing in skinny water, I’ll use a smaller size than I would if I were targeting deeper water,” Chandler said. “You can keep it higher in the water column without it digging bottom constantly. As I go deeper, I’ll use a larger size because it will sink faster and allow me to spend more time in the most productive strike zones.” 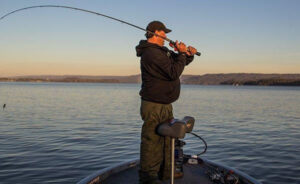 The tight wiggle and color flash of a lipless crankbait is enough to catch a few bass on a standard, cast-and-reel retrieve, but it doesn’t unleash its full potential. The next time you hit the water with a lipless crankbait, Chandler suggests trying these retrieves.

Don’t be afraid of cover

If you’re not careful, it’s easy to lose your lipless crankbait when fishing around cover. While standard crankbaits are designed with a bill to aid in cover deflection, a lipless crankbait is different. To achieve its trademark tight wiggle, you won’t find a bill. The result is a fish-catching machine that’s prone to hang-ups.

There’s good news, however. Chandler believes the absence of a bill can be counteracted by four simple tips.

If you’re getting tired of braving the cold winter weather without good results, take a day to fish with a lipless crankbait. If you can learn where to throw it, how to work it and how to unleash its full potential, you’ll enjoy more and bigger bass this winter.