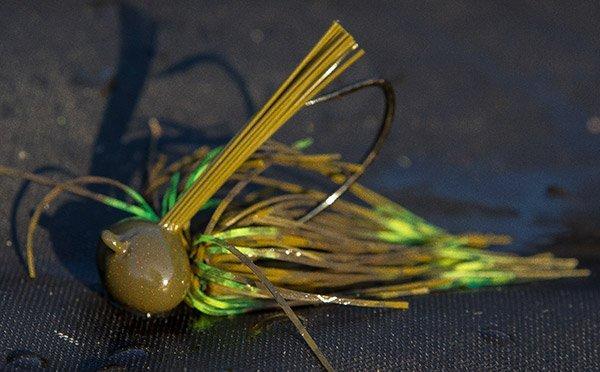 We’ve had a great response to our blog on five custom skirts you can build on your own for skirted bass jigs. We appreciate the feedback and response to that piece and we wanted to follow that up with one on a reoccurring question, what jigheads to we like to put these skirts on when bass fishing. Great question and one that certainly should be addressed.

In my mind there are really five major jighead types for skirted bass jigs. There are certainly multitudes beyond that of different shapes for each of the five major categories, for as we know in fishing, everyone wants something just a little different. But for the most part I would say the five classes of jigheads for skirted jigs would be a football jig, a swim jig, a finesse round ball jig, an Arkie or other flipping head, and a casting head

Certainly you can swim an Arkie head or cast a ball head so there is a grey area when it comes to the application of different style heads. But I’ll go into why I think each head style is unique and the application for it is unique. But will I have all five jigheads on the deck of my boat at one time? Usually I will not. I might have a flipping jig, a football jig and a swim jig at one time on there but hardly ever all three. But when I go to different locales, I start filling my box with one particular type or another based on the situations I expect to face.

This head shape is obviously the shape of our favorite pigskin pastime game ball. Only it’s turned sideways on the hook eye. The reason for this is it gives the jig a wide nose that helps it roll over rocks instead up sliding into a crevice with a pointing nose and getting your line lodged leading to more snags. Because of its shape and size, you can also get a pretty heavy one, up to 1 ounce. That makes it a great option for casting and fishing deep and dragging it around over large areas out deep.

I’ve found that I like a really sharp hook and one with a bit more open gap that doesn’t flex. The reason is I make long casts with not terribly heavy line. So I might have to drive a hook in a fishes mouth 20 yards away in 25 feet of water. But I’ve also caught bass to 8 pounds on this style jighead so a hook that flexes is no good.  I typically fish it with a steady sideways drag like a Carolina rig. Occasionally I will stroke the jig up off the bottom to try to get reaction bites. I like it with a twin-tail trailer threaded onto the hook most of the time. 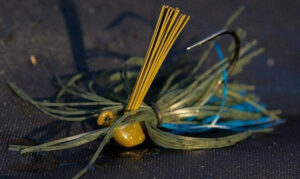 Anglers at all levels have proven that flipping a jig can be a deadly, tournament-winning strategy on a variety of lakes from coast to coast. The Arkie style head developed by the Carnes brothers of Arkie Jigs has been probably the longest and lasting design for a flipping jighead but it’s certainly not the only shape for a flipping head.

What I like about the Arkie head though is it has a head shape that is cupped so it planes, skips and stays up right for the most part while fishing. That’s part of its allure when it comes to fishing heavy cover. If you can keep your hook point up and over the cover instead of sideways and down in the cover, you will be snagged a lot less.  Typically with flipping jigs I will just hang my plastic on the hook like I used to do with old pork chunks. I like the free swinging trailer, unless I’m fishing in vegetation. Then I will sometimes thread the plastic onto the hook shank just to make the bait a little more compact and easier to get into holes in the vegetation.

A good weedguard is paramount on a flipping jig. A lot of the performance of the weed guard can be dialed up or down with a slight trim. If you cut a weedguard shorter it gets a lot stiffer. If you cut it too short though it won’t block the hook point from cover. If you are worried that it’s too stiff you can cut individual strands out of the weedguard to make it a little more pliable. You can also fan the weedguard out left and right to give it more coverage area but make the hook point penetrate with less pressure. Just keep in mind if you pull real hard into brush, it’s probably going to snag. 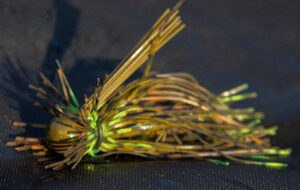 The Eakins Jig from Jewel really put finesse jigging on the map. It was a technique that was born in the Ozarks for fishing on rocky highland reservoirs with ultra clear water. Lakes like Bull Shoals, Table Rock, Beaver and other clear water impoundments have shown that a small profile on a jig can catch some major weight, especially on fisheries that have a mix of largemouth, smallmouth and spotted bass.

The round head is as much about keeping the profile of the jig small. These jigs often have spider cut skirts  with a small flared collar and short strands barely cover the hook. So the round head keeps the profile very narrow and natural. It’s great not only casting on rocky banks, but also flipping around floating docks and other cover. But one thing many anglers have found is those light jigs with small heads, skip really well. It’s the style Gerald Swindle uses most of the time when he’s skipping jigs under docks. 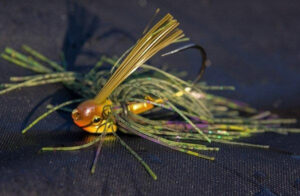 Swimming a jig for bass has been around for 30 years but it really gained popularity in the last 10. The characteristics I like for in a good swim jig head are a flat bottom on the jig so it planes well in the water and a bit of a wedge shape so it will slide between stalks of grass, stakes in a stake bed, and over matted vegetation.  Shapes on swim jigs vary as much or maybe more than any other style of jighead for skirted bass jigs. But for the most part there is some characteristic of both these properties in most good swim jigs.

I will keep my swim jigs pretty simple with either a shad pattern skirt and head or a bluegill pattern skirt and head and occasionally a dark jig for darker water. I like to swim a jig fast because I’m looking for something that causes a great reaction than a spinnerbait just thumping its way around cover. There is really nothing like seeing a huge wake coming 100 mph to run down a swim jig you’re reeling as fast as you  can just under the surface. 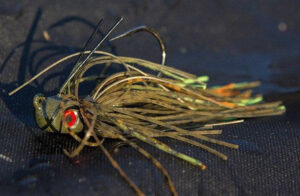 Yep you can cast and fish just about any of the other style heads but when I think of casting jigheads, I’m thinking a lot about those small jigheads with shorter hooks, wire weedguards and compact profiles for fishing for not only largemouths but especially smallmouths. I like to think this technique was born in central Kentucky on lakes like Cumberland and Dale Hollow. Clear water fisheries where smallmouth are prevalent. The small head and wire weedguard seem to make it easier to hook and land smallmouths that are notorious for clamping down on jig so hard that you can’t get the hook to penetrate their mouths.

I love to cast a jig because it’s such an overlooked and underused presentation for a jig. I will often target steeper banks, points and channel swings, especially in clear and cold water. Then it’s just a matter of making long casts, letting the jig sink and then I work it back with three short pops of the rod tip and let it sink. It seems like a crawfish hops in a few short strokes when he’s swimming off the bottom and then sort of just glides back to the bottom. When you’re after bass that are feeding heavily on crawfish, this jighead style and technique is deadly!

So that’s the five jighead styles I’m going to use 99.9 percent of the time. There are a multitude of head shapes and sizes and some may say their designed specifically for other applications, but I’ve found these five styles will fit just about every application I have encountered from all four corners of the country. Matching a good skirt with a good jighead and applying it to the situation will definitely make you a more efficient fisherman and that leads to more bites and more landed bass.