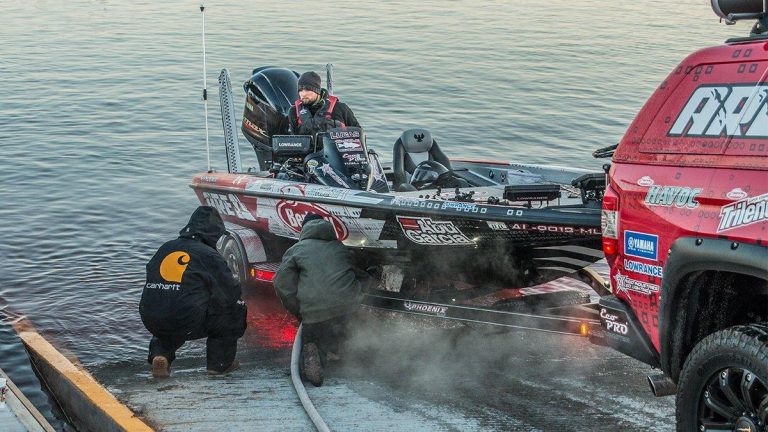 Some lakes are known for how deep they are.

Some are known for the type of structure and baitfish they have.

Others are known for serving as the sites of some of the greatest moments in professional bass fishing history â€” and one of those from that latter column has been chosen as the home of next year’s GEICO Bassmaster Classic presented by DICK’S Sporting Goods.

The 48th annual world championship of professional bass fishing will be held March 16-18, 2018, in Greenville and on Lake Hartwell at Anderson, S.C., it was announced today in a news conference in Greenville’s Bon Secours Wellness Arena, which will be the site of daily weigh-in ceremonies.

â€œThe opportunity to host the Bassmaster Classic for the second time in four years solidifies the Upstate of South Carolina as a destination, nationally, for bass fishing,â€ said Neil Paul, executive director, Visit Anderson. â€œLake Hartwell is a tremendous natural resource and continues to gain national attention as a championship fishery, and we welcome anglers from all levels to enjoy its greatness. Our Anderson County team, our partnership with Greenville, support from our regional partners and the state of South Carolina have proven vital to our overall success where we continue to experience returns in residual tourism from hosting the 2015 Bassmaster Classic.â€

â€œGEICO is proud to continue its successful partnership with the Bassmaster Classic,â€ said Ted Ward, vice president of marketing for GEICO, title sponsor of the event. â€œThe Classic offers a great platform for us to engage and connect with a growing bass fishing audience, who are some of the most passionate and loyal fans in all of sports.

The event will mark the third time the â€œSuper Bowl of Bass Fishingâ€ will have been held here. As in previous visits in 2008 and 2015, fishing competition will take place on Lake Hartwell, a 56,000-acre impoundment on the Savannah, Tugaloo and Seneca rivers along the South Carolina/Georgia border.

Takeoffs will be from Green Pond Landing and Event Center, a modern, $3.1 million launch facility in Anderson, S.C., that was completed just in time for the 2015 Classic and was built to accommodate that and similarly large bass tournaments.

â€œNothing says â€˜I love you’ more than a repeat customer,â€ said Chris Stone, President and CEO of VisitGreenvilleSC. â€œSeeing the wild enthusiasm outdoorsmen have for the Bassmaster Classic has made this a must-attend road trip for area anglers. The entire upstate will have its collective arms wide open to welcome back our friends in March 2018.â€

â€œBringing the Bassmaster Classic back to the Upcountry of South Carolina was an easy decision,â€ said Bruce Akin, CEO of B.A.S.S., which conducts the event. â€œDespite record-cold temperatures when we were there in February 2015, fishing fans turned out in force. Our attendance of 103,000 those three days marked a 40 percent increase over the 2008 Classic and was one of our biggest turnouts ever.

â€œWe expect next year’s Classic to be even bigger and better â€” and warmer,â€ Akin added, noting that the fishing competition will take place almost a month later in 2018 than during 2015.

Perhaps no Classic in history has shown the strength of a fishery like that 2015 event, when temperatures made such a monumental dip. It was just 9 degrees for the opening morning of the tournament â€” a morning that featured the National Anthem being performed by South Carolina angler Casey Ashley â€” and competition was delayed with the anglers’ safety in mind.

Despite the conditions, there were still multiple five-bass limits of 20 pounds or more brought across the scales at the Bon Secours Wellness Center Arena, and Ashley needed an average of more than 16.6 pounds per day to win.

Casey’s winning catch of 20 pounds, 3 ounces, was just a little heavier than the 49-7 needed by Texas pro Alton Jones to win here in 2008.

â€œIt was really just an amazing thing to watch,â€ said Trip Weldon, B.A.S.S. tournament director. â€œThe conditions were tough â€” some of the toughest we’ve seen for a B.A.S.S. event, especially a Classic â€” and the lake still produced so many good fish. It’s a credit to the fishery and to the quality of our anglers â€” and it shouldn’t surprise anyone that we’ve decided to go back.â€

The economic impact of the Classic on host communities each of the last few years has averaged more than $24 million, according to independent research by local hosts, and coverage of the event by more than 250 registered media representatives will continue to focus attention on Lake Hartwell, Anderson, Greenville and other Upcountry destinations.