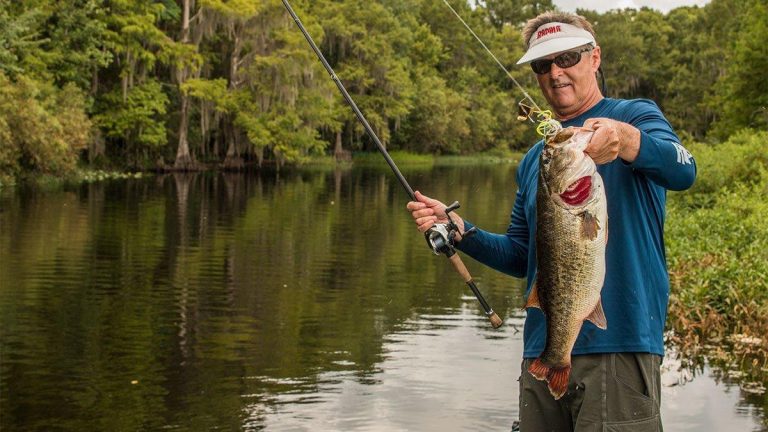 When the buzzbait first made its entrance into the bass fishing world, it was actually considered unfair by many anglers. No oneâ€”including the fishâ€”had seen anything quite like it, which resulted in monstrous blowups from trophy-sized bass. Sure, it was an abstract-looking lure, but guess what? It worked; and worked quite well.

Fast-forward to today and you’ll often find buzzbaits hiding in the dark corners of fishermen’s tackle boxes. The lure that was once considered “too” effective has largely been overshadowed by newer and trendier offerings, such as the hollow-bodied topwater frog.

According to Elite Series pro Bernie Schultz, however, buzzbaits remain one of the most effective topwater bass fishing lures in existence. Whether you’re looking to improve the quantity or quality of your catch, they certainly deserve a spot in every angler’s arsenal.

In order to maximize your buzzbait success this year, Schultz believes there are 10 key factors to understand.

Like most bass fishing lures, buzzbaits are a situational tool. Sure, you can haphazardly cast them around the shallows and catch a few fishâ€”but to unleash their full potential, it’s imperative to be aware of their particular advantages.

Most outdoorsmen, both anglers and hunters alike, live for those special “magic hours” of daylight. As the sun rises and sets each day, the outdoors seem to come to life. The ducks fly, the bucks move, the bass feed and you guessed itâ€”the buzzbait bite turns red-hot.

Throughout the summer months especially, you’ll have your best success in lowlight conditions,” Schultz said. “That’s not to say you can’t catch some big ones in the middle of the day, but this is when you’ll probably get the majority of your bites. The bass move up to the shallows to feed and they can’t help but choke on a buzzbait. Before and after summer storms is an excellent time, too. In addition to barometer falling, the sun goes behind the clouds and makes the bass more apt to roam about and feed aggressively.” 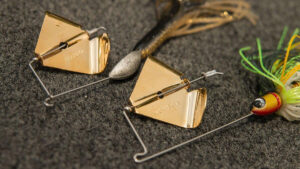 A stroll down the buzzbait aisle of your favorite fishing retailer can turn into an overwhelming and stressful task. You’ll find some that clack, some that squeak and others that gurgle. So where in the world do you start?

To simplify both your purchasing decision and on-the-water selection process, it’s good practice to familiarize yourself with the three basic buzzbait categories.

Trailer hooks can be your best friend

There seems to be two very different thought processes in regards to the use of trailer hooks on buzzbaits. You’ll talk to some anglers who swear by them and others who avoid them due to the increased likelihood of hang-ups.

“I always use a trailer hook unless the surrounding cover prevents it,” Schultz said. “It’s very rare for me to use a buzzbait without a trailer. That’s why I designed our Hildebrandt buzzbaits with a short-shank O’Shaughnessy trailer hook. Bass don’t always have the best aim when they’re attacking prey on the surface, so I want to give myself all of the advantages I can getâ€”think of it as a cheap and easy insurance policy against heartbreaks.”

Retrieve speed can make all the difference

We’re all guilty of drifting off into “Lala Land” when we’re fishing. It’s easy to get tuned-in to the specific preferences of the bass when you’re wrecking them, but once you fish for a while without any bites, it’s tough to keep your concentration.

If you can train yourself to stay focused on your retrieve speed, however, Schultz believes you’ll quickly notice an increase in your success.

“Sometimes retrieve speed makes more difference than a color or size change when you’re dealing with short-striking bass,” Schultz said. “Contradictory to what you might think, a faster retrieve will increase your hookups in many cases, especially with clacker-style buzzbaits.”

Schultz received a major, albeit accidental, clue when fishing a tournament many years ago that solidified his theory.

“I was throwing the Hildebrandt HeadBanger on the Potomac and as the tide got higher, they kept missing the lure,” Schultz said. “I tried everythingâ€”follow-up lures, size changes and color changesâ€”and all they would react to was this particular buzzbait. But then I made a long cast, missed another fish and raced the buzzbait back to the boat to make another cast and had a 6-pounder absolutely inhale it at my trolling motor. That single fish catch clued me in to the importance of retrieve speed. I burned that buzzbait the rest of the day and had one of the most awesome topwater days of my life.”

Schultz’s blade color selection is surprisingly simple. Over the years, he has developed a system that allows him to quickly choose the most productive color for the current situation.

Monofilament, braid or neither?

Much like the trailer hook debate, line preference is another polarizing issue in regards to buzzbait fishing. After experimenting with several different line types, Schultz has found a relatively overlooked line type that works excellently for this technique.

“Many folks believe there are only two line options for topwater fishingâ€”monofilament and braided line,” Schultz said. “But I’ve actually settled on using copolymer for most of my buzzbait fishing. I’ll use 15-pound Sufix Superior for my 1/4-ounce buzzbaits and 20-pound Sufix Superior for my 1/2-ounce buzzbaits. It’s a very buoyant line with just the right amount of stretch. I’d rather have a little bit of stretch because the bass don’t always hook themselves well on the initial strike.”

There are times however, in which he’ll bulk up his line selection to 40 or 65-pound Sufix 832 Braid. If he’s around “ridiculously thick cover” and giant bass, he’ll utilize the zero-stretch properties of braided line in order to muscle the fish away from any snag-inducing cover.

Sometimes you need to tick ’em off

Although buzzbaits are known for their efficiency, they also have an uncanny ability to irritate inactive bass to the point of biting. To take full advantage of this, Schultz stresses the importance of making repeated casts to likely hiding spots.

“Repeated casts to an area can make the difference between a good day on the water and an incredible day,” Schultz said. “In the summer and early fall months, it can sometimes take five or six casts to a specific spot before you get a bite.”

Think of it like this: If someone pokes you in the face, you might let it slide a time or two. But if they keep doing it, eventually you’re going to get ticked off and do something about it. That’s exactly what these repeated casts do to big bass. They might not even be thinking about feeding, but sooner or later they’ll try to kill that disturbance out of sheer aggression.

Don’t set the hook on the blowup

It’s perhaps the most common mistake anglers make when topwater fishingâ€”they set the hook the moment the bass strikes. It’s a really hard habit to break. But if you can train yourself to avoid the overwhelming temptation, you’ll instantly become a much better topwater angler.

“You always want to keep visual contact with your buzzbait, much like frog fishing,” Schultz said. “I know it’s tough, but don’t set the hook on the blowup. You want to make absolutely certain that the lure is in the fish’s mouth before you swing. So when I see that buzzbait disappear and feel the first sign of tension on my line, I’m going to try to break my rod. You have to swing hard to drive those hooks into its mouth. It’s all a matter of practice and discipline.”

Schultz also notes the importance of keeping a level head. Let’s face itâ€”everyone is going to swing and miss from time to time, especially with topwater lures. So don’t get down on yourself when it happens. Take every miscue as a learning experience.

While every fishery is unique to some degree, Schultz believes there are five buzzbait hot spots worth targeting regardless of your geographic location. If you’re looking for a quick way to gain some confidence in this technique, these high-percentage areas are superb starting points.

If you’re looking for some explosive topwater strikes this year, dust off your buzzbaits and spend some time utilizing Schultz’s tips. It’s a tremendous way to keep your heart thumping and your rod bent.