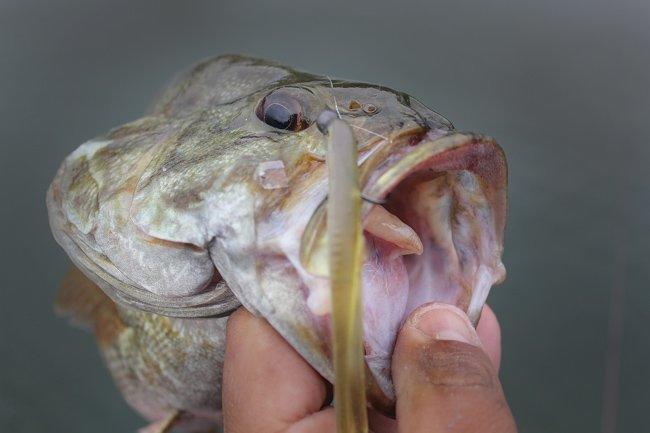 Find the bait; find the bass. It’s a seemingly simple rule that most bass fishermen often forget to follow. Bass anglers have been conditioned to target either cover or structure in their pursuit of big bass. Bass use humps, grasslines, ledges and other “high-percentage areas” as pit stops on their never ending quest to capture bait. The so-called high-percentage areas fisherman pound away on only play home to a small fraction of the bass population on a given water body.

The preponderance of predatory bass in northeastern waters spend the majority of their lives suspended in the water column chasing schools of baitfish. Why is it, then, that anglers after numbers of big bass don’t spend their time on the water targeting those fish? The answer is simple; fishing for suspended bass is intimidating.

The bait’s ability to seemingly disappear in minutes frustrates anglers and makes locating schooling fish a daunting task. However difficult it may be, utilizing this information will assist anglers in their efforts to locate and efficiently target the majority of the bass population, rather than continuing to focus on the minority.

When chasing bait, suspended bass do always relate to structure. Therefore, their whereabouts on any given day can be unpredictable. Anglers should consider wind direction the most important variable when seeking out bait and bass.

While some fishermen dread the wind, as it poses certain difficulties regarding boat positioning, in this instance, wind is an angler’s greatest ally. A common misconception amongst fishermen is that the baitfish are pushed by the wind; however, the wind on the surface of the water does not possess enough force to prevent the baitfish from swimming against it.

Though the bait can easily swim against the wind, what cannot are the various phytoplankton on which they feed. When the wind pushes the phytoplankton and other microorganisms to one side of the lake or the other, schools of baitfish follow close behind, as do hungry bass in search of an easy meal.

When the wind isn’t blowing enough to position the bait, anglers should focus on deep water basins and main creek channels. Creek channels are fish highways, and though these areas may be expansive, the likelihood of anglers running into schools of bait is greater than one may think.

Fishermen should not be weary of increasingly deep water. It is not uncommon for suspended bass and bait to be located 20 feet below the surface over 60+ feet of water. That being said, focusing their efforts on narrower sections of the lake that still have plenty of deep water will increase the likelihood of anglers coming across a feeding frenzy.

Narrow sections of water bodies are like funnels, concentrating fish in a much smaller area, which will make scouring the depths for schooling bass much easier. 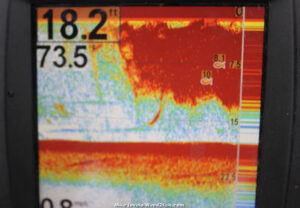 Fishing in the clouds

More often than not, anglers will come across schools of bait that do not have actively feeding bass beneath them. Targeting these schools of bait can be pointless. Even if the bass are close by, it is likely that they are inactive or have already fed.

While the bass will always make an effort to remain close to the bait, the fish will only feed in small time frames to conserve the energy continuously chasing forage requires. It is not uncommon for blitzing bass to only feed once a day, capturing all the sustenance they require in one concerted effort. Anglers should utilize their electronics properly to determine when they’ve come across this golden opportunity.

When idling, anglers should be on the lookout for large, closely grouped pods of bait which appear more like dense clouds of fish than distinct streaks separated from balls of baitfish. Fishermen will not always be able to see fish streaking through the bait, even when they are actively feeding; therefore, any school of baitfish that appears as one solid mass on the depth finder is worth further investigation. Sparse pods of bait spread across a vast area should be avoided, despite how enticing the visual depiction of fish on the screen may appear. 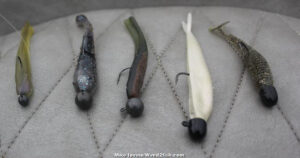 Anglers trolling for trout and other suspended species over deep basins often report giant smallmouth and largemouth mixed in with their daily hauls. The concept of trolling was tweaked and adapted to fit within tournament bass fishing guidelines. Anglers utilize tactics like “strolling” and “long-lining crankbaits” to get to bass in these greater depths, suspended and feeding on big pods of baitfish.

Though long-lining big crankbaits allows fishermen to cover immense amounts of water and get the bait to greater depths, the tactic is unnatural and often untimely.  Northeastern waters are, for the most part, deep and clear, and weary bass aren’t going to spring on an unrealistic, gaudy hunk of plastic when there are millions of baitfish around. Furthermore, the amount of water moved by a large hard bait will likely disturb the school and make the bass aware of an unnatural presence.

Northeastern anglers will have much more success targeting suspended fish utilizing light line and vertical finesse presentations. Most shad shaped soft plastics used for drop shots will work well when vertically presented to schooling bass on 4â€“ to 8-pound test fluorocarbon line, which is essential due to bass’ ability to see very well in clear water.

Since there are no weeds, cover or structure for fish to wrap around when hooked, anglers just need to make sure that their drags are set accordingly in order to land the big ones. Presenting lures vertically will allow for precision that cannot be attained by trolling or “strolling” hard baits, putting your bait directly in from of the fish’s faces.

However the most important part of the puzzle is the use of a light 1/16- to 1/8-ounce jighead, rather than a drop shot rig. When rigged in this manner it may seem as if it takes soft plastics an eternity to get down to the desired depth, but a swift descent will appear unnatural to finicky, suspended bass. The use of a very light jighead assures the bait will continue a slow rate of fall after entering the school of bait.

If rigged on a drop shot, the weight bouncing into the bait can easily be mistaken for a bass chowing down on the lure. In addition to the increase in sensitivity, rigging a soft plastic on a tiny jighead will result in a more compact offering that appears more natural than a rig sinking weight-first through the school. As the subtle offering slowly glides beneath the school, mimicking a dying baitfish fluttering towards the bottom, the feeding bass awaiting an easy meal will be unable to resist.

Fishermen should not be afraid to drift away from their honey holes. While the typical cover and structure that’s been fished time and time again holds plenty of fish, just think of all the suspended bass out there that have never seen a lure!

Suspending bass are generally plentiful, have likely reached their maximum size potential and are very rarely targeted. Playing the wind, utilizing electronics wisely, and employing the most natural of presentations possible will assist bass fishermen across the northeast region in capitalizing upon an untapped population of giant bass. 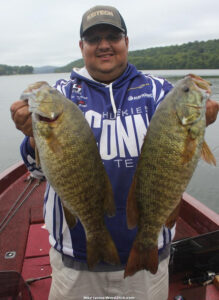