I was reminded recently how good a frog can be for clear water bass fishing when they are spooky and up super shallow in the heat of summer on lakes where most anglers aren’t even thinking about fishing shallow anymore because of water clarity. I’ve seen it on Kentucky Lake, Smith Lake, Table Rock Lake, Beaver Lake, Dale Hollow and more lakes across the country. You’re going down a bank breezing along throwing a topwater or maybe a wacky-rigged Senko, and all the sudden, a 4-pounder swims out from what seems like nothing at first. A little shady spot in what seems like inches of water was holding a 4-pounder on a 95-degree day in the summer. You fish around to the next pocket and it happens again. That’s not a coincidence. That’s a fishing pattern.

This used to be an infuriating occurrence, especially when the summer doldrums makes for slow, tough bass fishing. You don’t get many bites, then you see a nice bass swim off before you can even make a cast.

A frog is a dynamite choice in these circumstances. Especially if you’re talking about some key ingredients like shade, bluegills, cover, ambush cubbies and more. Hopefully this will help other anglers struggling to catch fish in these shallow clear water situations.

More places to fish a frog than most think 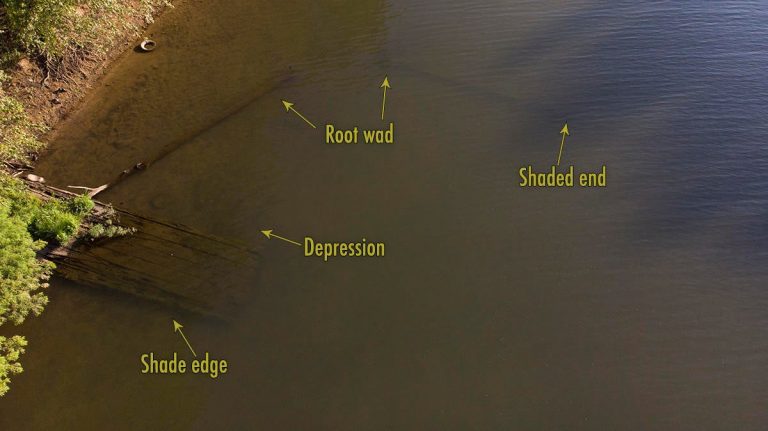 I had an instance this spring on a shallow flat where the bass were in the shallowest clear water, and they were in just about every little dark ambush spot they could find. On one flat, there were bass on the root wads of a couple of laydowns, on the shady side of an old sunken dock, just laying in  darker, deeper depressions and then just using the shade to conceal them in really shallow water. It was just before they were going to spawn.

Fast forward to the summer, and I’ve seen bass laying or had them bite a frog in several of these exact same types of places on other lakes. It’s like they are roaming the shallows feeding on small bluegills and minnows and they will just lie in these little hidden dark spots. You’d be amazed how many little nooks and crannies never get fished and in ultra skinny water, you can stay way off of these spots and cast a frog around and catch those fish. 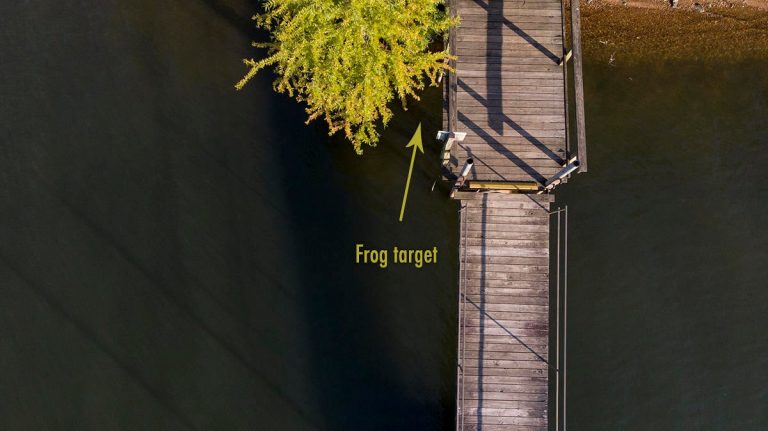 One place I’ve had a lot of success are wherever there is a dark cubby up against a bank. Sometimes it’s two things like a seawall and a big rock or a overhanging tree and a stump. Or maybe just a shaded indentation in the bank. For some reason if a bass can sort of back himself into a carport and look outward for unsuspecting forage, he will get in the dirt to hide there.

With a frog you can often shoot the bait in there, even going all the way onto the bank and stealthily approach the bass in inches of water, often getting a very startling reaction. 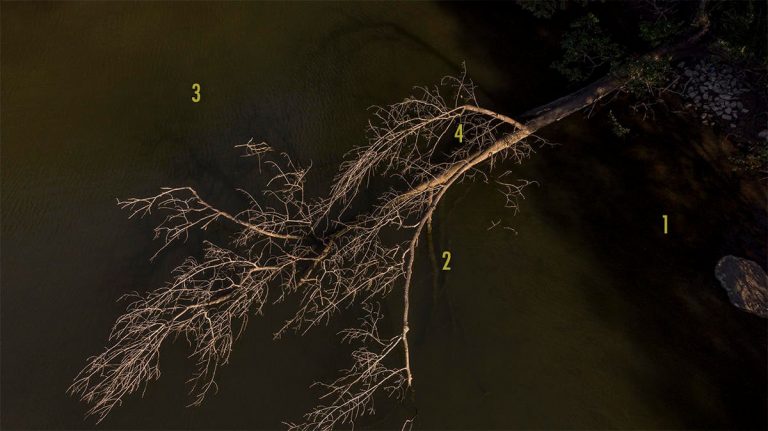 You pull up on a good looking area that should hold a shallow bass, and it’s surprising how often a bass comes off something nearby the obvious cover. That happens a lot in the summer in pockets with say cover like laydowns. For whatever reason, maybe the obvious cover gets hit by a lot of anglers and the bass become weary of using it. But the are still nearby on some other types of holding spots like these:

1) Sometimes they are in the shade next to the laydown.

2) Sometimes they are on ancillary pieces of cover next to it.

3) Sometimes they are foraging on something like a bream bed nearby.

4) And then other times they are in that darkest spot of the cover.

I really had no idea how effective a frog was around bluegills until several years ago. I was fishing bluegill beds after seeing some bass chase bluegills off nests while fishing panfish with my son the weekend before. Some of the beds were right on the bank next to docks and under overhanging trees. About the only thing you could get up there was a wacky rigged Senko skipped up to them. But they didn’t react to it.

Then I started working a hollow-bodied frog over the beds. These little bluegills would school and follow the frog, and then out of nowhere, a big bass would blow through there and crush the frog. 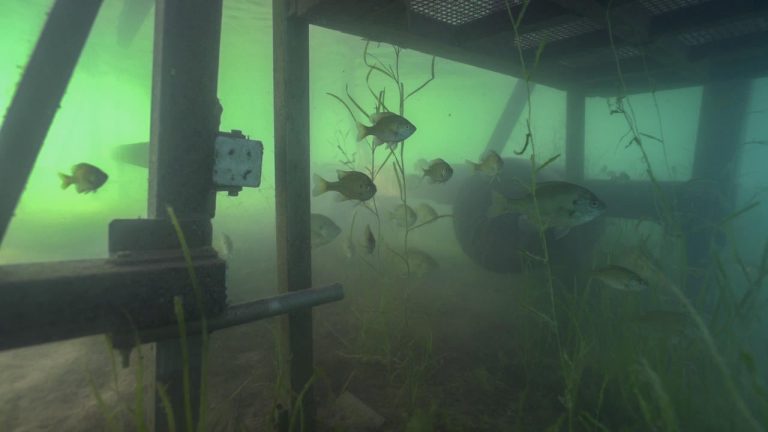 It makes sense. Talk to any good frog fisherman that fishes mats and they will tell you the best ones are the ones where you hear bluegills popping under the mat. It makes me wonder if the bluegills do that under the mats. School and herd under the frog like they do in clear open water and that is what actually attracts the bass.

I know I have seen it a bunch fishing the shade of docks. You cast up in a dark lane, start working the frog and get a bunch of bluegill tracking it. Then all the sudden a crushing strike from a big bass. Was it the bluegills getting activated that made the bass bite? I’m not sure, but shade and bluegills are a deadly combo in clear water with a frog.

Reach for a frog more often

I really like a popping style frog most of the time. I can pop it in a small cubby, keeping it in the strike zone, or I can walk it through an area. I can call fish with it. And I can usually skip it into places where no other lure will go.

The Spro Dean Rojas Bronzeye Poppin’ Frog has been a staple for this scenario forever. I also really like the Strike King Popping Perch a lot too after spending some time fishing shallow clear water with Todd Castledine, the lure’s creator. He really turned me onto that frog a couple years ago on Table Rock. And I got it out a few weeks ago there to crush some nice largemouth on one of the hottest days of the summer.

I was struggling to catch numbers of quality bass out deep, so I went shallow and skipped Senkos and fished topwaters around the flooded cover. But it wasn’t until I picked up the Popping Perch that I went on to catch a very nice limit of summer largemouth in skinny water applying these tactics.

Hopefully you’ll reach for the frog more in these situations too. I fish mine on 50 or 65-pound Smackdown Stealth Gray on a Falcon Lowrider Amistad with a Lew’s Hyper Mag Speed Spool or Super Duty baitcaster. That setup lets you stay way off of shallow spots and send the frog a long ways and move it stealthily into shallow position for more bites before the fish spook off in that ultra skinny clear water.