You never hear an angler say, “look at the ears on that fish”, because well, crappie do not have ears, at least that are visible. However, crappie can hear fairly well, and depend on their hearing and feeling of sound and vibration more than their eyes for both locating prey and protection.

Like all fish, crappie have ears and those ears are equipped with otoliths. Otoliths are the crappie’s ear buds, made up of bones that vibrate small hairs when sound vibration is present. The most notable otoliths are the rocks found in freshwater drum. Crappie also have lateral lines on either side of their body that are thin grooves lined with hair-like nerve endings that detect vibration.

Shallow water anglers are familiar with the stealth involved to catch crappie without scaring them away, but did you know there are times when noise won’t spook crappie, and can actually help trigger a strike.

Whitey Outlaw has been filling coolers with slab crappie for the last 50 years, and there are few anglers who know more about the importance of sound than him. Whitey won his first crappie tournament at 15 years old, and although he and his partner Mike Parrot are the standing point’s champions in the Crappie Masters Tournament Trail, he spends more time vertical jigging his home waters of Santee Cooper in South Carolina than anything.

Here are three things Outlaw learned to consider about sound when crappie fishing:

When to get quiet

“Crappie that are committed to structure are hard to run off, and if they’re biting, they’re still biting even if you startle them,” Outlaw said. “Our fish are structure-oriented here, living in thick vegetation, around wood, and in grass beds most of the year. I run a flat-bottom boat with a small outboard and no trolling motor on Santee. I’ll run right up on a grass bed, take a pole and reach over and make a hole in the grass, and dip my jig in the hole without ever shutting off my outboard, and if he’s there he’ll stomp it!”

“If you pull up on a cypress tree and bump it enough to scare the fish, he most likely didn’t leave the tree, he just ran around to the other side,” said Outlaw. “Reach around to the back side of the tree and you’ll usually find the fish.”

The other side of the equation is suspended crappie in shallow water flats.

“At the Crappie Masters tournament at Lake Washington, Mississippi last March, sound and vibration had everything to do with the bite,” said Outlaw. “In a shallow, basin-lake without much cover like Washington, the added boat pressure from the tournament had a negative effect on the fish. We figured out that getting away from the other boats and shutting off the depth finders and trolling motor as much as possible was the key to catching the bigger crappie.”

Outlaw and his partner Parrot won that tournament with 16.13 pounds with their 7-fish limit.

How to be quiet

Load the boat – One of the best ways to cut down on boat noise when fishing in waves is by adding weight to the front of the boat. Crappie anglers have used everything from sandbags to extra batteries in front compartments to keep the bow of their boat from bouncing and creating noise from waves splashing on the bottom of the boat.

Play the wind – Wave noise is significantly increased when going into the wind, as well as having to run the trolling motor to hold your course. By going with the wind and dragging wind socks behind the boat, the splash on the front of the boat is lessened. Utilizing two smaller wind socks hanging from cleats towards the bow of the boat will also decrease bounce, thereby decreasing noise.

Put a silencer on the bow – The Silent Stalker is a product that has emerged in the last year to great fanfare for shallow water anglers. It is essentially like a “bra” used on cars to keep bugs off, but attaches to the bottom of the bow of a boat. With heavy vinyl material that straps tightly to the bow, wave noise is almost completely eliminated, which is especially crucial when fishing out of an aluminum boat.

Turn everything off – “When crappie are pressured, like at Washington last spring, turning off your electronics and front aerators and staying off the trolling motor can make all the difference,” Outlaw said. “The big graphs we’re running today push a lot more watts than the old ones, and crappie will sense the sonar.” 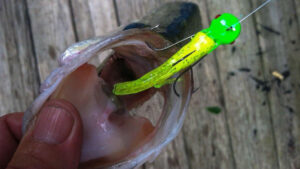 How to make the right noise

Rattling jig heads – Baits that intentionally create noise to induce strikes have been around for a long time, but crappie fishermen are just now cashing in on the technique.

“The Rockport Rattler has changed the way we fish,” Outlaw said. “I vertical jig with the 1/16-ounce head and there is no doubt it creates bites. If the crappie is aggressive he’s going to stomp it as soon as it hits the water, but what the rattle does is catch fish when they’re not aggressive. I’ll drop it down and bounce it and shake it, and the crappie will come after it, and it’s especially effective in muddy water.”

Whitey was so convinced by the addition of a rattle for triggering strikes, he designed a jighead for slow-trolling shallow water for big crappie. Rockport Rattlerâ€™s Outlaw Special is a weighted triple hook head. The oversized head is indicative of shallow water trolling in the south, and the rattle helps attract crappie. Big, aggressive crappie in shallow water will often run with a bait rather than pull down, causing hooks to land in the soft side of the fishâ€™s mouth. The Outlaw Special utilizes three extra-light wire hooks that can be bent in any direction, insuring a solid hook-set.

Inserting the rattle – Bobby Garland bait company offers small, insert rattles that have a sharp point and can be inserted into any soft plastics. This product is especially useful when pushing double-minnow rigs with plastics on top of the minnow, where the use of a jighead is not needed. 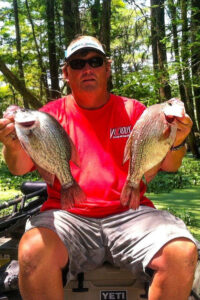 Whiteyâ€™s rods of choice for crappie

Whiteyâ€™s influence in the crappie industry is obvious when perusing vertical jigging rods at a tackle store. The Whitey Outlaw Santee Elite by Bâ€™nâ€™M Pole Company is a 2-piece, graphite rod available in 10, 11, and 12-foot models, and has no eyes, just an opening a few feet up from the butt to run line through the center of the pole and out the tip. This eliminates the hassle of hanging your line on limbs and grass when fishing through heavy cover, and if thereâ€™s one thing Whitey favors, itâ€™s eliminating hassle.

Duty by Bâ€™nâ€™M Poles is a 10 foot, 2-piece graphite rod. Itâ€™s a medium action to handle big bream, shellcrackers and crappie, and you just tie the line on the end like an old cane pole, except it has a much better feel!â€