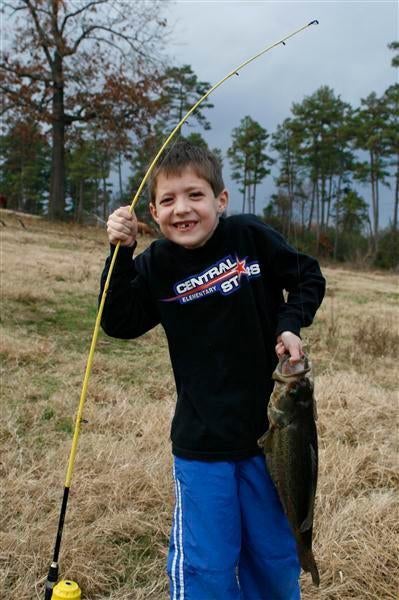 So we all got our start somewhere in fishing. And I’ve had several parents asking me how to get their kids that are showing an interest in fishing started on small waters like ponds and streams near the house. That’s where I spent probably 10 years of my childhood honing my fishing fundamentals and studying bass, panfish, trout, stripers and more fish up close.

Ponds vary in size obviously. But a small body of water is a great place to introduce a kid to fishing. You don’t have to hunt and peck around much. The fish are in a confined space. There are only so many places they can hide. So the catching should be a lot more than the fishing if you can figure out how to make the bite.

Obviously the cover in ponds can vary, but a lot of ponds are farm ponds with little to no cover in them and these can be some of the easiest places to introduce kids to fishing. If you don’t want to go the livebait route because of mess and hassle, you can start a small tackle box of lures for a little bit of money and cover your bases pretty well.

Some staples to keep in mind are size and color. If the pond is clear, more natural looking baits will be the key and if the water is muddy, brighter louder more active lures can be better.

Some of the staples that have worked over a period of 30 years fishing ponds, streams, rivers and small bodies of water include scaled down versions of the popluar lures that work on various fisheries.

My son and I are headed to Papa’s farm pond over Thanksgiving break, and I put together a small box for our trip (pictured above). This pond has one small laydown, a little grass and a few scattered rocks. Otherwise it’s a pretty bare mud pit. Last year I figured out that a dominant little bait was a 1/4-ounce Z-Man Mini Chatterbait with the skirt removed and a shad imitating plastic added to the back of it. My son and I had a blast busting the ponds bass some weighing more than 3 pounds

Here are some suggestions for some affordable small scale tackle to drop in a pond box to get your kids started fishing small waters.

Small Crankbaits â€“ I would save these for kids a little older, say maybe 6 years or older, just because the trebles themselves can be a little hairy with a fish writhing on the end of the line and a small kid fighting it up to the tip of the rod as they often do. But these diminutive versions of their big brothers really work in farm ponds. Baits like the Strike King Series 3 and Series 1 are good starting selections as is the new finesse versions of the Berkley Flicker Shad and Rapala Shad Rap.

Topwater baits â€“ One staple topwater that has worked wonders on pond and stream bass is a Heddon Tiny Torpedo. This small prop bait works well at calling in fish but it’s still subtle enough to not spook the often skittish small water fish, especially those in clear waters.

Inline spinners â€“ Spinnerbaits are a good choice, especially the mini variety. But I’ve found that an inline spinner like a Mepps or Roostertail will not only catch bass but it will catch bream, crappie, trout, and other fish that are often found in other ponds especially those run by the state or city. Often those fish are stocked in the ponds and an inline spinner is a dynamite little bait that doesn’t cost much and can really catch them. The kids just cast them out and reel them back in. And they are compact but heavy and easy for kids just learning to cast.

Worms â€“ a plastic worm is a great choice and there are a bunch of varieties perfect for a pond. A shaky head is a good choice, a texas-rigged 4 inch worm is another one, but my favorite choice for open water pond fishing is a pre-rigged worm like the Berkley RigWorm. You can twitch it along, and entice bass with a subtle profile, but because the hooks are exposed, the fish hook up more often than not. It can be hard for kids to learn to set a hook hard enough to get a Texas rig or shaky head to stick.

Grubs â€“ a grub was a staple for me for a number of years. I wrecked some Ozark streams in my high school years with nothing but a box of 3-inch smoke grubs and 1/8 ounce jigheads. Crawl them on the bottom, swim them like a minnow. Fast or slow. These baits really produced. Some interesting options now also feature small spinner blades and flashy colors. Lures like Blakemore Road Runners and Northland Thumper Jigs are good alternatives for just casting and reeling and you can catch a lot of other species on them.

Jigs â€“ I’m a jig guy so I’ve always got to have some silicone skirted jigs with small trailer chunks. I like the new Terminator Finesse jigs in 1/8 and ¼ for kids with a small plastic like a Zoom Super Chunk Jr. I also added a small shaky head with a natural looking crawl like the new Z-Man Punch CrawZ to my jig offerings. This is good in clear water but the kids have got to be able to set the hook to stick the fish. The Z-Man Elaztech does seem a little easier for kids to stick fish through.

There are obviously other lures that will work. In weedier ponds, a weedless spoon, spinnerbaits, jigs with more substantial weedguards, plastics rigged weedless and more will also work. But keep in mind that when getting kids or new folks into fishing, setting the hook is a learned trait and often using baits with exposed hooks can be a lot easier for them.

I have a fond spot for small waters because of my own childhood falling in love with fishing in places like Piney Creek, Crooked Creek, the Kings River, the Buffalo River and a farm pond that was a short trek through the woods for me in my pre-teen years. I probably developed my love for fishing more there than anywhere

It doesn’t take much to get the kids going. You can pick up a cheap spinning reel and rod or a combo kit for kids that often come spooled with line already and pick up a small box and some small baits and you’re on your way. Make it all about the kids. Get excited for them and your excitement could be all it takes to build a lifelong for fishing.

We’ll continue our philosophies on getting into fishing tomorrow. Until then, travel safe and have a wonderful  Thanksgiving with your families and friends from all of us at Wired2Fish!