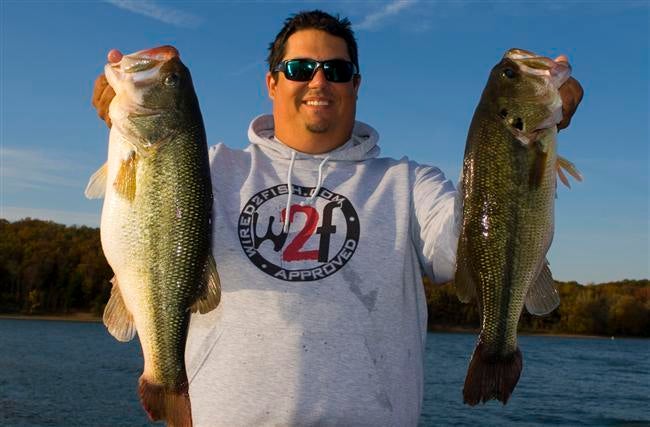 As most have seen now, three bass fishing tournaments in recent weeks were won on a new bass fishing umbrella rig contraption called the The Alabama Rig. That’s at least the ones we know about. First an FLW Outdoors BFL Regional was won on it, winning a Chevy truck and Ranger boat. Then Paul Elias really put the Alabama Rig on the map with his win on Lake Guntersville in the FLW Tour Open. And most of the top 10 also got nice checks thanks in large part to the Alabama Rig.

Last week The Alabama Rig struck again with Dan Morehead winning the Everstart Championship on Kentucky Lake. Much of the field was throwing the rig with various swimbaits for the four days of the event. While the catch rates didn’t keep pace with those of Guntersville, this tournament saw a lot more weather fluctuation and heavy pressure systems that put the fish further out of reach. Finally on the final day, Morehead was able to coax more than 19 pounds of bass to the boat with the use of TAR.

The knockoff count is already up to four that I’ve seen not including the “homemade variety.” But knockoff is a loose term in this situation as what we’re talking about here is an Umbrella Rig, and they have been around for ages. In fact, one umbrella rig seemed castable to me so I took it to the lake this weekend to see what the hype was firsthand with the new “castable umbrella rig” craze that is sweeping through bass tournament fishing like gossip in a high school.

Brian Wilson, owner of Cumberland Pro Lures, and a regular co-angler on the FLW Tour has been making umbrella rigs for striped bass fishing for years. He makes them in all different sizes. One thing he realized was that his biggest smallmouth on Lake Cumberland every year were fishing his umbrella rigs for stripers. He had the request 5 years ago for smaller rigs that could be cast around and pulled in shallows for stripers. This year he took his smallest one and threw it in his bag for the FLW Tour. He thought it could work for bass fishing, but it never came out in a tournament.

Then Paul Elias talked about The Alabama Rig and he got nauseous to the point of throwing up. He knew he’d made an error not pulling the castable version of his umbrella rigs out sooner.

Fast forward to Sunday, and we finally took his umbrella rigs to the lake to see if something other than stripers might like it with all the craze for castable umbrella rigs on the lake this past week. It’s nothing like the Alabama Rig but the premise is still there. If he could cast it for stripers with bucktails, why couldn’t he cast it for bass with other lures. 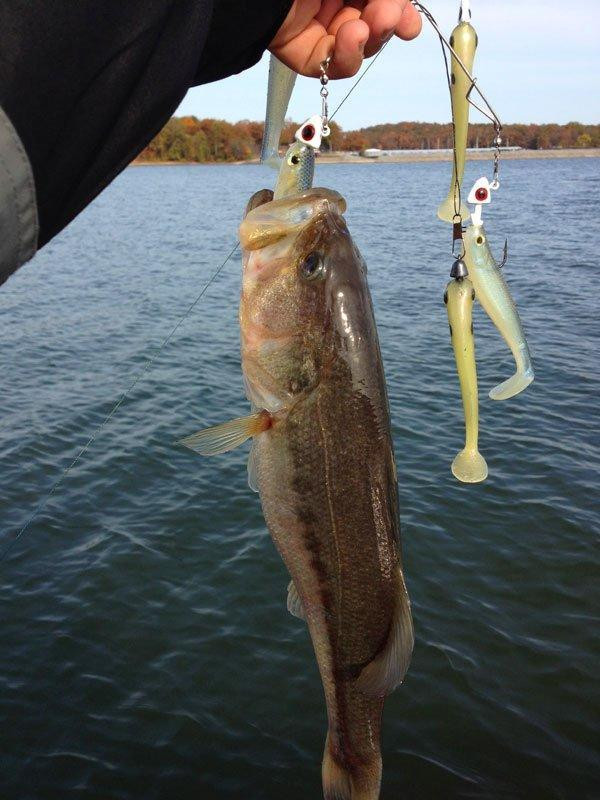 It wasn’t much. But it was a start. We decided to make a move. Already I was learning more about fishing an umbrella rig like this. It takes some time to get your speed down with the rig and that comes with how heavy your swimbaits are, the line you choose and gear ratio. To slow and you get the rig stuck on the bottom. Fish them too fast and often you’re presentation isn’t appealing or you’re not in the strike zone long enough.

Water clarity was another issue. They need to be able to see or feel the rig. But this is where I’m a little confused. The clearer the water, the better our bites seemed to be. Which is odd to me after thinking about it. We’ve harped and preached about concealing our line and using fluorocarbon because fish can’t see it. Then I pull five swimbaits through the water hanging on a steel harness with swivels and snaps and leaders and more. The fish didn’t care, as we soon discovered.

Our next stop, we pulled up to rocky bank and started casting. We were there five minutes when the boat shook a little. I turned around to see Wilson’s rod tip nearly in the water. Something was pulling hard. He eased it up and we lipped it, a solid 5-pound largemouth bass. We fished the area some more but the wind was blowing us around pretty good with 20-mph gusts.

We ducked back into a protected area and started heaving the castable umbrella rigs around. You have to learn to lob the bait with a slow back cast loading and the uncoiling into a launch sequence that mimics pulling the string on a trap thrower. We found that braid likes to bind on occasion and can send your rig into a piled mess not far from the boat.

The umbrella rig does not cast well in the wind and has a tendency to catch baits on the arms if you cast directly into the wind. Sometimes you can pop and twitch the rod and get it straightened out. We also found that losing a rig with five heads and five swimbaits is a painful pill to swallow. Ugh.

We worked our way to the shallows, reeling faster and faster as we did. We started boating bass, keepers and shorts together. The beauty of these rigs is that they give an offering that is not overbearing to a just keeper bass. Yet the school of bass is a big enough presence to attract very large bass.

My theory on this is similar to the effectiveness of big trout swimbaits like the 12-inch Huddleston Deluxe thrown out west on those fisheries with very large forage. This is a larger offering with the individual forage being the size that the predator fish really relate to.

Our fifth stop was where we saw what could happen. We cast the rigs out and worked them back to the boat at a good clip. I looked back again to see Wilson’s rod doubled over.

“Another big one,” he muttered.

We eased it to the boat and I lipped her and brought it aboard, another bass close to 5 pounds. We were pretty impressed and a bit perplexed about the whole situation.

Tons of thoughts were racing through my mind. Would those bass have bit something else there? It’s possible a single swimbait with a big profile like the Bull Shad would tempt these big bass. Maybe they would like a jerkbait like the Megabass Ito Vision 110 in the same circumstances. Could they find them in the wind and waves?

Back to casting. By this time we had both been at it for four hours. Casting the rig over and over again takes total commitment. I have arthritis pretty bad in my hands and would have to sit down and drink a soda every now and again to take a little break. I don’t usually have to do that with any other technique I fish. 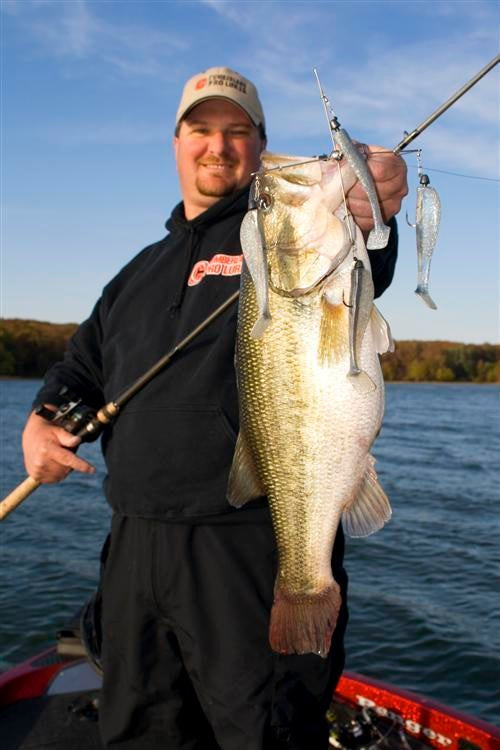 Moments after the last big fish another one. A bruiser of a bass loaded the rod and we fought and wrestled him into the boat. This fish was just shy of 7 pounds, a fat-bellied beauty of a bass. And we were convinced the umbrella rig was doing something to trigger better fish to bite in tough conditions.

We lost two more great big fish, and as a bonus, we got into a couple areas that yielded several nice stripers. Those striped bass weren’t what we were after, but they were a nice fun bonus on a day of experimenting and testing.

After the day was over, we had a 3 pounder, a 2 ½ pounder, a 4 ¾ pounder, a 5 ¼ pounder and a 6 ¾ pounder for a 22 pound limit as well as several other shorts, stripers and just keepers to boot. Had we landed the two big bass we lost, we would have most assuredly had one limit worthy of bragging rights for a bit.

But I find myself conflicted more after throwing it, than I was before I threw it. Not conflicted about whether it’s sporting or not. I mean you cast that rig for 10 hours like we did and let me know how you feel afterwards. It’s not like you can just go casting on the bank, and you’re going to magically catch them.

We stopped on more places and did NOT get a bite than the places where we did get a bite.  I also think we might reach a point quicker where the bass become conditioned to seeing it than when other new baits first hit fisheries. Because there is so much hardware associated with these versions of umbrella rigs, I can see the bass getting more conditioned to it.

Then there’s this weird sensation I’ve gotten since throwing a small umbrella rig. I was as tired as I’ve ever been after a day of fishing, yet the next morning I wanted to go throw it again and not anything else. Because I had seen the power of what it could do when the conditions were right.

But that’s just it. It’s like any other lure in your arsenal. The conditions have to be just right. It just so happens in the fall of the year, the bass suspend around bait. An umbrella rig looks like a pack breaking off from the school and easy pickings for the bass.

And it’s not going to work on every fishery. I think certain fisheries with big populations of bass and more importantly big populations of forage that cause bass to behave this way will make it an ideal offering during times when the bass are setup on the bait.

But there are going to come times when the fish aren’t suspending around the bait like cover. And I feel the castable umbrella rigs are not going to be as effective as other triggers and lures in our arsenals. But only time will tell. I suppose we need to see some big weights caught on something other than one of these castable umbrella rigs before we will know for sure. 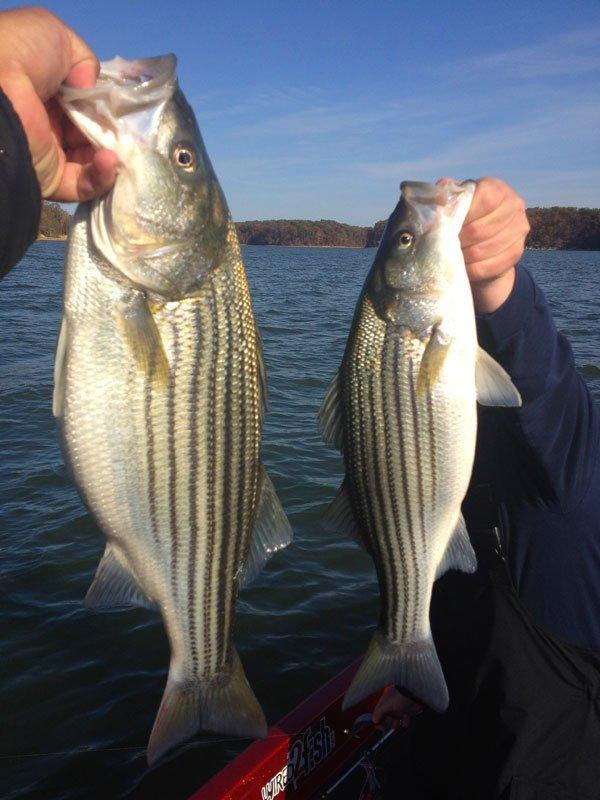