When fall gets here, it seems like the fishing starts to wind down. The fish aren’t in big schools, and they definitely aren’t as dumb as they are in the spring when one seemingly random flip can land you the bass of your lifetime. But fishing has never been about luck for us at Wired2Fish. It’s always been about preparation. It’s about time on the water. It’s about putting in the homework to know how to spend time wisely on the water.

We’ve already been doing it some, but it will really ramp up for us now that it’s cooling off. We’re talking about scouting. Of course we’re still fishing as long as the weather will allow. But we’re also studying our fisheries because they are generally at their lowest level this time of year. So a guy can literally troll around and make mental notes about things he sees that will be covered with water when the lakes come back up in the spring.

But if you’re like us, there’s a lot banging around in these heads of ours, and remembering one stump on an expansive flat six months later is like trying to remember what shirt I was wearing on my first date with my wife. You married guys know how painful relationship trivia can be. Had I known then what I know now, I would have taken some photos.

Photos are one way we’re able to create a scouting report for our lake from year to year. There are several things you can do to help you remember where those isolated pieces of cover or ditches in the backs of bays are when they have five more feet of water on them.

Take a Picture. If you don’t have a point-and-shoot digital camera or camera on your phone, then maybe go to Walmart and pick up a disposable camera. Do they even make those anymore? Seriously though, a photograph is a great way to remember how gnarly a certain spot is or where the most productive points are in an area. It might be an indention in some riprap. It might be the space under a laydown. It might be the network of branches in a brush pile. Identify them with a photo. I use the Navionics Chart Viewer online, but with the iphone app you can actually waypoint a picture so that when you drive up on it in the spring, you can pull it up and look at it again on your phone. Very slick for scouting.

Look into the water. I never fish without my polarized Costa Sunglasses. I can’t tell you how many times I’ve looked into the water and saw a dark spot, pitched a bait to it and caught a big bass. The stuff under the water is always more productive then the stuff everyone can see out of the water. So when you’re scouting at low water levels, try to find some stuff a couple feet under the surface. Usually this time of year the lakes start to clear up from lack of rain and current. So your visibility is improved. Find something in 4 feet of water, and it might be in 9-10 feet next spring â€“ making it a hidden hotspot most will miss.

Use physical lineups. If you can triangulate your hot spot, it’s even better. To do this you need something in the distance with something behind it. So that you can line the two things up. It’s best to use permanent things. Don’t use buoys, boats or docks as those will move sometimes with water levels. Once you do that one direction, try to find something else at a 90-degree angle from your spot and line two things up that way. Then when the water comes up you basically drive to your two lineups and make your cast.  One thing to note is you want to get your physical lineups on your boat position not the actual object because you don’t want to be sitting on top of the object when you make a cast.

Feel the cover. I will sometimes throw a jig or Texas-rigged plastic at something I find in the water and pull it over it to get a feel with how gnarly the cover is. That and I don’t care what time of year it is, isolated cover holds bass. I can’t look at a piece of cover and not make a pitch to it. But when I come back in the spring and throw on it in 10 feet of water, I will know when I’m on it by how it feels.

Stake it. A lot of good stumps are marked with stakes. They are marked that way so that you don’t hit them when the water comes up a little. But they also mark a likely place for a big bass to hold when the water comes up. Several good things can mark a likely spot. A stake, a dowel rod, fence post, property marker, and more can be used. One word of caution, you might be careful about putting something there that could potentially tear up the underside of your boat in case you come in too close to your spot or the water gets a little too high.

Waypoint it. I do a lot with waypoints on my graphs. I’ve marked a lot of stumps already this year. I will go through and change the icons on a lot of them to note that they are actually pieces of cover rather than spots that already yielded fish. If you will mark a waypoint on the cover and then another where you think your boat should sit, you can make good lineups. Keep in mind the waypoint marks where the GPS puck is. So it’s often good practice to line your puck up with the target before marking that second way point with your boat in a straight line to the target. That way you will be in line and it’s just a matter of casting a few extra feet.

Got other tips for scouting in the fall and winter? We’d love to hear them. 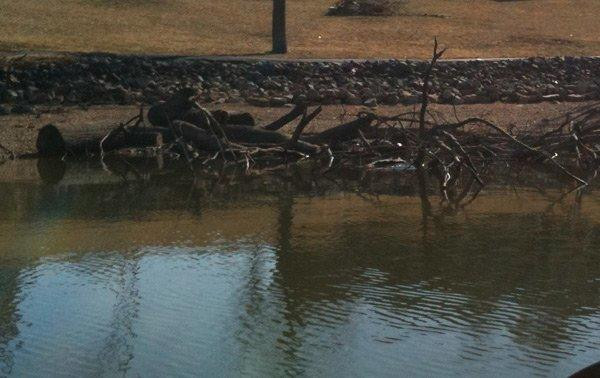