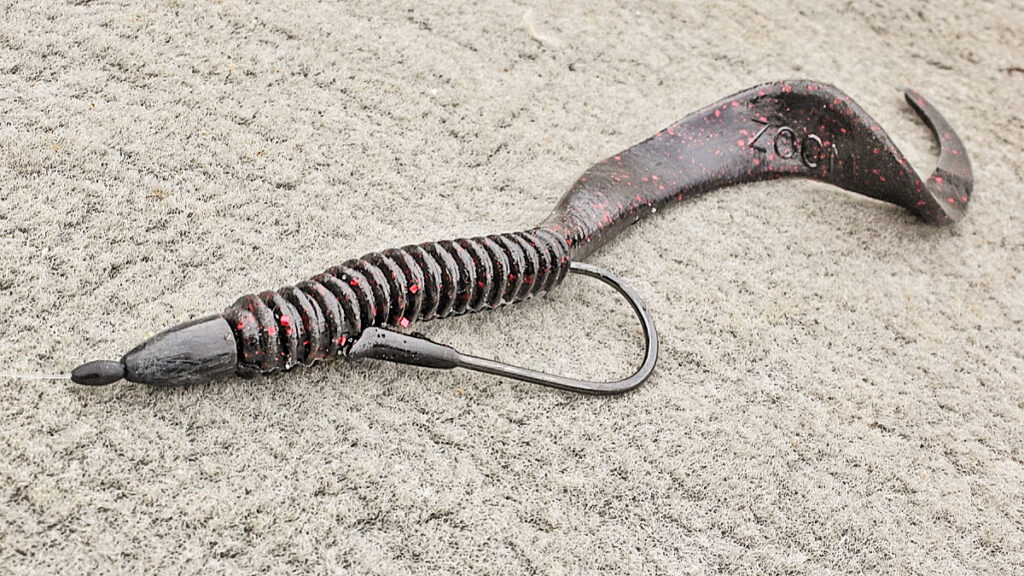 This third bait was a toss-up between a Texas-rigged worm and a shaky head, so that’s why we just went with a worm in general. A Texas rig is a little more weedless, which means it can be fished around and through a wider range of cover better. A shaky head, however, is easier to rig and can be fished more efficiently a little deeper than a Texas rig sometimes. So really, you can pick your favorite or the one best-suited for the situation here and both are likely to get bit.

If I was rigging a worm for an angler to fish in less than 10 feet of water around laydown trees for instance, I’d opt for the Texas rig. I’d slide a bobber stopper on the line, a bullet weight and tie on an offset worm hook. Then I’d slide the point of the hook through the nose of the worm, come out after about 1/2 inch and slide that part over the eye of the hook, finishing the bait off by running the point of the hook through the midsection of the worm and tucking the tip back under soft plastic just barely to make it as weedless as possible.

Fishing a worm one of these two ways gives you a presentation that is completely different form the spinnerbait and lipless crankbait. You’ll just drag the worm along the bottom. You’ll need to pay close attention to make sure you detect the bite and set the hook within three to five seconds of getting that bite to give the fish enough time to get the bait, but not enough time to let them swallow it.