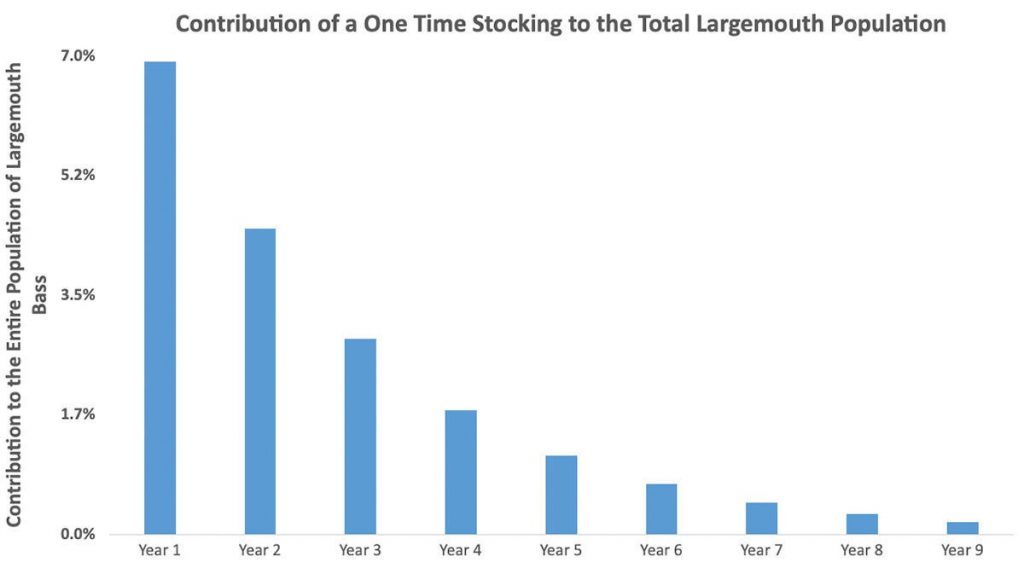 Stocking is done to increase abundance or alter the genetics in a population.  Martin has studied the stocking results of 75 bass stocking attempts across the US, including a review by Dr. Steve Lochmann of the University of Arkansas at Pine Bluff that looked at 41 scientific studies where they attempted to stock bass.

“In these 75 attempts, the biologists actually calculated the age 1 contribution results,” Martin said. “Basically before they stock, they will mark them with a fin clip or some other method which allows to be distinguishable from wild fish, and then come back the following spring and sample and determine what percentage is a result of stocking. Contribution is the percentage of stocked fish in a population.”

“At first glance the idea of adding more small bass to solve the problem of low numbers of small bass seems like the most linear and straightforward solution of all, but when you really start looking at other lakes where they’ve tried this, the plan starts to fall apart.”

“The average stocking rate from those 75 attempts was 32 bass per acre. When they came back and sampled a year later, the stocked fish made up a little less than 20 percent of the year class, or roughly one in five fish from that year class was a stocked fish. You can’t just stock hundreds of bass per acre and expect your numbers to be higher. Some of these examples, they were stocking well over 100 bass an acre but were still getting less than 20 percent contribution.

“If you look at the examples where they had more than 20 percent contribution, they were almost all on tiny bodies of water. So stocking a pond to improve bass numbers works. Stocking a large reservoir is a very different story which is why it’s rarely attempted. The largest lake studied was 21,000 acres (compared to 218,000 acres for Kentucky Lake and Lake Barkley), and its contribution rate was very low at 5 percent.”

“To match the average stocking rate from those studies, you would need to stock around 7 million bass in these lakes every year to maybe get that 20 percent contribution to the fishery. You can’t just stock one year because you would only contribute to one year class. A bass might live to be 15 years old in Kentucky Lake, so at any given time you have about 15 year classes in the system. If for example you stocked bass in only 2021 and the stocked fish somehow actually achieved the average year class contribution rate of 20 percent to the 2021 year class as we saw in those smaller lakes, it would still only be 6.9 percent of the total population.

“By the time those hatchery fish reached 5 years old (average age to reach keeper size in Kentucky Lake), they would only make up 1.2 percent of the total population. So it would have to be done annually for 15 years in a row to potentially achieve that 20 percent contribution to the entire population of bass.

“Those 7 million bass are more than all our state hatcheries could produce in a year even if we halted production of all the other species of fish. You could stock that many fry, but stocking fry is close to useless in most water bodies because most won’t make it. To raise advanced sized fingerlings is expensive and may cost anywhere between 75 cents to a dollar per fish.

“So to potentially see a 20 percent increase in our bass numbers with stocking we would pay somewhere between 75 and 105 million dollars, knowing the majority aren’t going to make it and contribute. That kind of money certainly isn’t available in state fisheries budgets, but even if it were, it still wouldn’t be a home run idea to spend it trying to stock a lake this size. It’s not that stocking would have no benefits, but rather it’s simply that the benefits would be very small and the costs are astronomical compared to other management options.”

Not to mention you can alter the genetics, like what happens when you introduce Florida strains. And those genetic alterations are irreversible. So fish that are maybe more difficult to catch in colder weather get a small foothold and the perception will be that fishing is tougher. We’ll save the Florida strain stocking explanation for a separate article, but studies have shown it’s not going to make a huge reservoir a trophy destination in a decade as far north as the Kentucky end of Kentucky Lake.