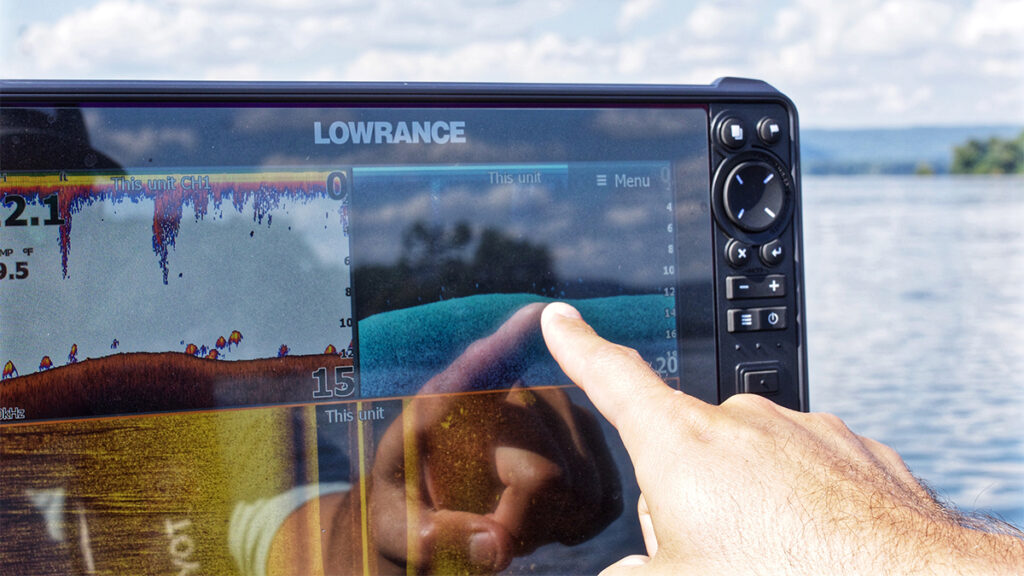 Finding offshore schools of bass during the fall requires a slightly different formula than looking for them in late May or June. Lester still uses his Lowrance units to SideScan and DownScan for groups of fish but not on main river ledges looking for mega-schools like he would in the summer. Instead he spends his time searching near the mouths of, or inside major creeks at a slightly shallower depth range.

“I focus on defined creek channels near the mouths of big, major pockets this time of year,” Lester said. “It’s kinda like when bass migrate towards deeper water after spawning in the spring, but in reverse. I envision fish making a few pit stops on roadbeds, humps, creek channel ledges, or points as they work their way towards the backs of creeks.

“I’m not looking for giant schools of 50 or 100 fish this time of year. If I see a dozen bass grouped up I consider that a good school in the fall. Sometimes a key spot might hold as few as four or five fish. In June I wouldn’t even stop to fish a place like that, but in October or November that’s exactly what I’m looking for.”

There is no such thing as an absolute in bass fishing. The reason 90% of the articles you read this time of year tell you to go shallow and look for shad, is because that’s what the majority of bass in the lake are likely doing. But there is always a percentage of fish doing something different and these are the fish Lester seeks out.

Experience has taught him individual bass that don’t follow the crowd are often big ones. Which is why he’s not afraid to take the time to fish around an offshore spot he may have only seen a handful of fish on this time of year. Whether Lester is in a tournament or out fun fishing, it’s worth the time investment when he believes he’s fishing for bigger than average bass.

The Team Toyota pro adjusts the depth range he focuses on during the fall transition. Baitfish and bass aren’t the only things experiencing change in autumn. The weather, water temperatures, and thermocline on a fishery all go through a transition this time of year, too.

“I’m looking a little bit shallower than usual,” Lester explained. “Instead of graphing in 16 to 25 feet of water like I would during the summer, I’m checking places in 8 to 14 feet of water. In my experience it seems bass really don’t want to be deeper than 15 feet this time of year, sometimes even shallower depending on where the thermocline sets up.”

Knowing there won’t be loads of fish staging offshore in the fall, Lester doesn’t waste a lot of time scanning miles of water with his electronics. He concentrates on high percentage areas near or inside major coves, ideally with a defined creek channel meandering through them, and doesn’t burn daylight on areas deeper than fifteen feet in most cases, regardless of the fishery.