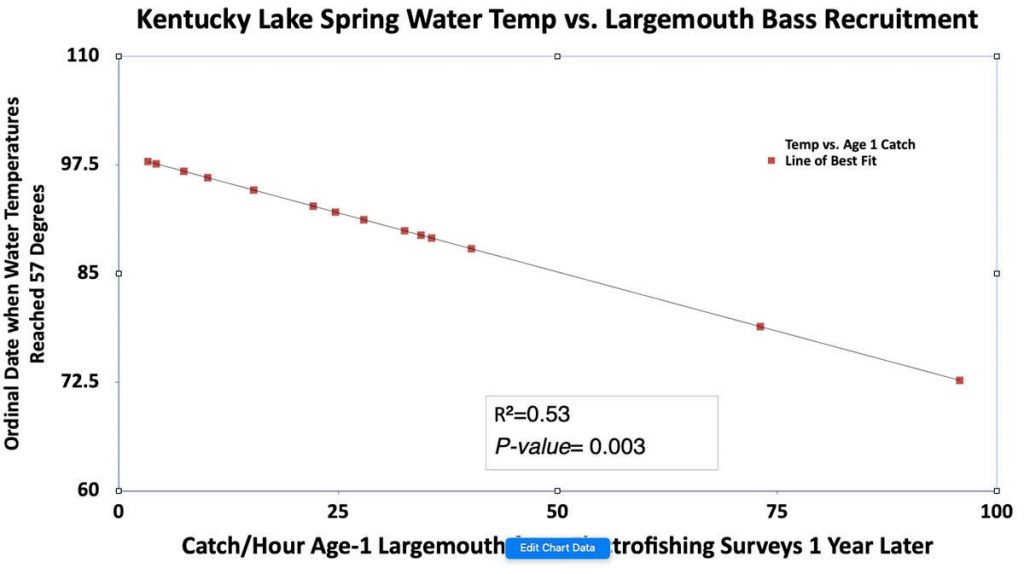 Martin has been studying the spawn temperature range that is the most important to predicting bass populations and his conclusions may ultimately help with population successes. This next part is the most fascinating thus far in understanding how to keep populations successful in a perfect world.

“The most important time on Kentucky Lake in terms of largemouth bass population is when the water temperature ranges from 57 to 65 degrees,” Martin said. “And you can actually predict the success of the bass spawn on Kentucky Lake if you know the number of the days that the water temps will be in that range as calculated by your catch rate of age 1 bass the following spring.

While bass will spawn as water temperatures climb into the 70s, Martin has found that the data is not as reliable when the range is wider. So the number of days in that early spawn temperature range is the best predictor.

“We did snorkel studies where we watched bass, bluegill, redear and longear sunfish throughout the spawn,” Martin said. “The bass get there first, then the bluegill, then the redear and then the longear sunfish. Most of it is based on light period and water temperature. So if you have a period where it goes from 50 degrees to 80 degrees quickly, you’re going to have more overlap and a shortened spawning window for each species. In ideal circumstances, you have bass show up the last week of March, and bluegill show up the first week of May.

“That longer temperature window in the early period creates more time for bass to spawn. Additionally, it’s also important when it comes to growth. Theoretically the timing affects how long the fish will grow to be in the fall. An earlier-hatched fish will be longer in the fall because it had more time to grow. A longer temperature window for the bass spawn also has the effect of delaying the bluegill spawn. That delayed bluegill spawn can also be a good thing because it gives the young bass more time to grow big enough to eat the newly hatched bluegill fry. We can basically explain young bass abundance and predict their fall lengths just by knowing the date when the water temp first gets into the range.”

For a healthy population of bass you want newly hatched bass to be as large as possible that first fall so that they can switch to eating shad and a larger buffet of food options for growing at a much faster rate. This can be the difference between making it through the winter or not because a lot of anglers forget that a huge portion of the bass that are spawned don’t make it through the first year.

Now knowing how important this temperature range is and maximizing the number of days fish spawn in the early period is of maximum importance. With Kentucky Lake, that temperature range often starts in March or April when the lakes are not at full pool. So the habitat requirements for a successful spawn are degraded. While much of the KDFWR habitat effort has been in placing cover in the lake to improve fishing over the years, the last few years, biologists have been focusing on cover that affects more successful natural spawning in the early low water periods on Kentucky and Barkley.

Martin, and his TWRA counterpart Michael Clark, have also worked with U.S. Army Corps of Engineers and TVA on not rapidly dropping our water levels if we are in that prime spawn temperature window. The TVA and Corps of Engineers have been very open to Martin’s recommendations as their biologists tell them the same things about dramatic effects on the spawn, but in massive flood stages, the Corps will take over management for the more important Flood Control Plans where you are talking about people’s lives, homes and land.

“The idea that TVA and the Corps don’t care about fish is completely untrue, but it is true that they will prioritize flood control over fishing,” Martin said.