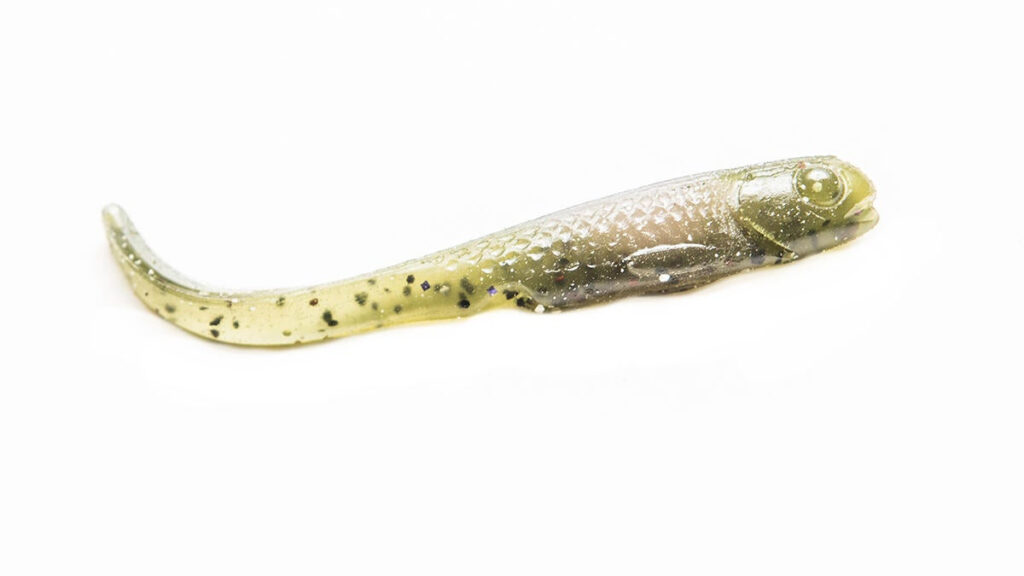 During the winter of 2019-20 and spring of 2020, we exchanged an array of emails and telephone calls with Michael Simonton of Berlin Heights, Ohio.

He is the proprietor of Venture Lures. He is also the designer and creator of six soft-plastic finesse baits, which he manufactures in his garage. During the spring of 2020, he began designing and working on bait number seven, which is a creature-style bait that he is initially calling the Little Bug. And it is being designed with Midwest finesse tactics in mind.

One of his baits is called the Supervisor and he sent several of them for us to thoroughly examine and eventually publish a gear guide about it.

Here is what we discovered about his Supervisor.

Its predoral area, which contains its head, is endowed with a noticeable upper and lower jaw, two pronounced and bulging eyes, and two significant gill membranes. Each eye has a diameter of 1/4-inch. The entire predorsal area is nearly 13/16-inch long. Its epidermis is smooth. Its dorsal is slightly concaved with a smooth epidermis and its isthmus and breast are convex with a smooth epidermis. The dorsal is a quarter of an inch wide at its widest spot. Its circumference, which includes its bulbous eyes, is about 1 7/16 inches.

The distance from the tip of the predorsal area to the Supervisor’s anus is 1 5/8 inches and this is its anterior section. Its dorsal is slightly concaved with a smooth epidermis. Its ventral is convex, and except for the imprint of two pelvic fins, which are about 3/8-inch long, the ventral’s epidermis is smooth. The epidermis of each side of the torso is embellished with an array of scale-like images. At its widest spot, the dorsal area is about 5/16-inch wide and the circumference of the torso at this spot is 1 1/2 inches. At this spot, the height of the Supervisor’s torso, which is the distance from the ventral to the dorsal, is about 7/16-inch.

Simonton noted in an email on May 11 that he designed it that way so it would move alluringly when anglers employ a deadstick presentation with the Supervisor.

Except for a few scale-like images, the posterior doesn’t exhibit the anatomical features of a fish.

From its anus to the tip of its tail, the posterior is 2 3/8 inches long. Its anus is demarcated on the ventral with a significant indentation or notch. The epidermis of the 1/4-inch of its sides is adorned with about 16 small scale-like images and the entire epidermis of the next 1 3/8 inches is silky smooth. The dorsal is flat with a width ranging in size from 1/8-inch to slightly less than 1/8-inch. The ventral is slightly convex with a width that ranges in size from about 1/8-inch to 1/16-inch. The height of the posterior fluctuates from 5/16-inch to 1/4-inch to 3/16-inch.

The posterior’s ventral has a V-shaped notch at 5/16-inch from the tip of the Supervisor’s tail. This notch marks the beginning of the tail. The tail is flat and thin, exhibiting the shape of the tip of an old-fashioned butter knife. It is about 5/16-inch long. It has a height of 1/4-inch.

It is manufactured in the following hues: Baby Walleye, Clearwater Perch, Erie Algae, Goby Plus, Money Minnow, and Smallie Money.

It is enhanced with salt and garlic.

It is very buoyant.

As we noted above, the Supervisor is a modern-day version of the shad-shape worm that Fukae introduced to the Midwest finesse world in 2006. Simonton originally designed the Supervisor to be affixed to a drop-shot rig. But Midwest finesse anglers will affix it to a mushroom-style jig, and they will present it to their black bass quarries by employing all six of the standard Midwest finesse retrieves. The Supervisor’s buoyant nature will facilitate the execution of the swim-glide-and-shake retrieve, which is a similar retrieve to the one that Fukae used at Beaver Lake in April of 2006 to win $200,000 at the FLW Wal-Mart Open. The swim-glide-and-shake presentation is retrieved so that the Supervisor travels from six to 18 inches above the bottom of a waterway. Fukae said that if his shad-shaped worm rig ever touched the bottom at Beaver Lake during the retrieve, it was a mistake. (It is interesting to note that we have noticed that many finesse anglers spend too much time employing presentations that are touching the bottom.)

You can find the Venture Lures Supervisor here.