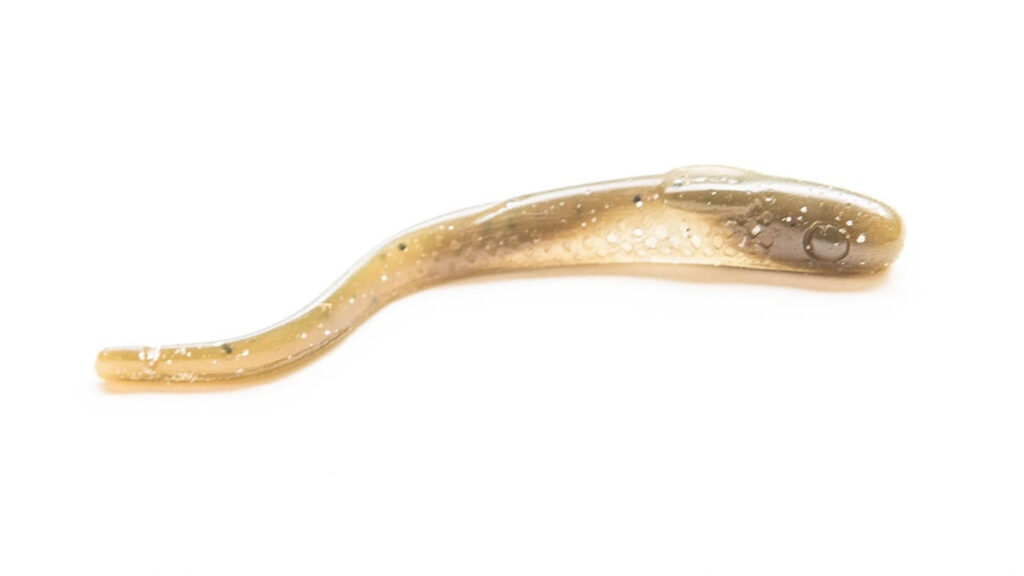 Michael Simonton of Berlin Heights, Ohio, is the proprietor of Venture Lures, and since 2016, he has created six soft-plastic finesse baits. They are named: Dropper, Essential Swimmer, Finesse Worm, Heckler, Supervisor, and Skinny Minnie. And during the winter of 2019-20, he began creating a small creature-style bait that he calls the Little Bug. All of them are finesse-size baits.

Here is what learned about his Skinny Minnie.

In many ways, it is a miniaturization of Simonton’s Supervisor.

Each side of its head is adorned with a large bulbous eye that has a diameter of 3/16-inch. The epidermis of the head and predorsal area is smooth. At its widest spot, the head is 3/8-inch wide with a circumference of about 1 1/8 inches. The tip of the head’s snout is dome shaped.

From the junction of the head and predorsal area to the beginning of the posterior section, each side of the epidermis of the anterior section is adorned with scale-like images.

At one inch from the tip of its snout, the anterior’s dorsal area has a width of 5/16-inch. At this spot, its sides have a height of 3/8-inch and its circumference is 11/4 inches.

At the junction of the anterior and posterior sections, the width of the dorsal area diminishes to about 3/16-inch. Its circumference is 15/16-inch and its height is almost a quarter of an inch.

Skinny Minnie’s posterior is significantly smaller than its anterior and this feature provokes it to undulate and gyrate dramatically. At 1 inch from the tip of the tail, the dorsal area has a width of 3/16-inch, a circumference of about 5/8-inch and a height of about 3/8-inch.

The tail is 1/4-inch long. Its width is slightly more than 1/8-inch with a height of 1/8-inch and a circumference of slightly less than 1/2-inch.

It is enhanced with a garlic scent and sprinkled with powdered salt, which keeps the Skinny Minnies from sticking together.

It is exceptionally buoyant.

You can find the Venture Lures Skinny Minnie here.