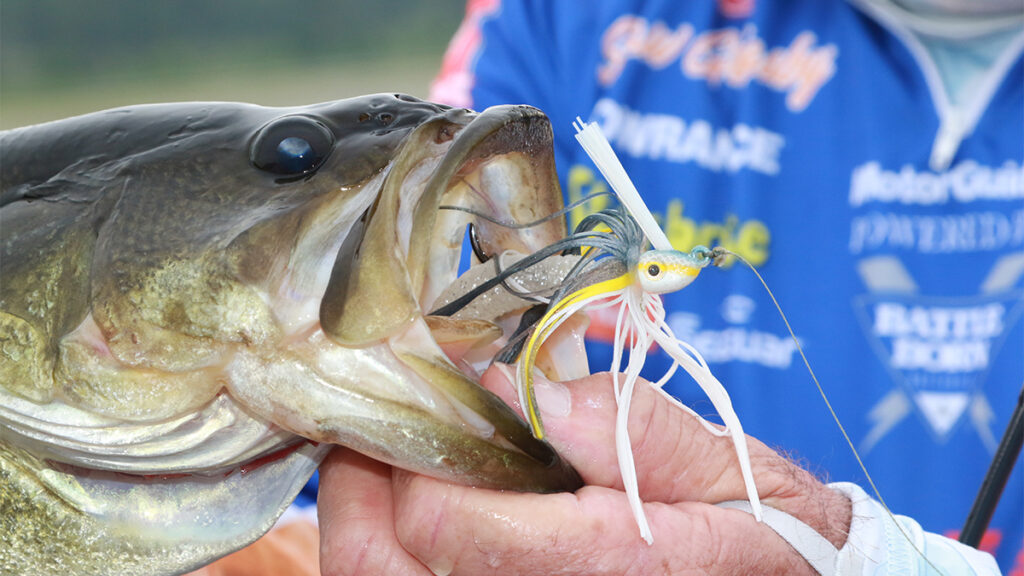 Preferring the Strike King Hack Attack Heavy Cover Swim Jig for its stout hook and fullback design, Grigsby knows wherever he slings this bait, it’s coming back out — ideally, within a big set of jaws. On the functional side, a long keeper grips the trailer further back on the body.

“There’s not much to re-rig,” he said. “So after you catch one you can get back on them pretty quickly.”

While the heavier presentations dominate, Grigsby occasionally goes to the lighter look of a Strike King Tour Grade Swim Jig. This one’s less likely stand up to the harsher neighborhoods, but when the bite is tough and fish are wary, a little modesty goes a long way.

“This bait has a lighter wire needlepoint hook so you can fish it on 10-pound fluorocarbon,” Grigsby said. “You just don’t need that big hook set to get that hook to penetrate. This is also a good bait to throw on a spinning rod with light braid.”

Color Code: Grigsby gives a white shad-imitating swim jig a lot of work, but he also throws a black and blue pattern and his personal favorite — the No. 234 bluegill color. If he’s fishing a lake when bream are bedding that panfish pattern is hard to beat, unless low light and/or a morning shad spawn makes white a better call.

Backseat: Grigsby pairs his swim jig with a Strike King Rage Menace and rigs it vertically to match a natural finfish tail orientation. For the lighter Tour Grade Swim Jig, Grigsby likes a full size Menace cut down by about 1/2 inch, while a Baby Menace or Rage Bug also work.