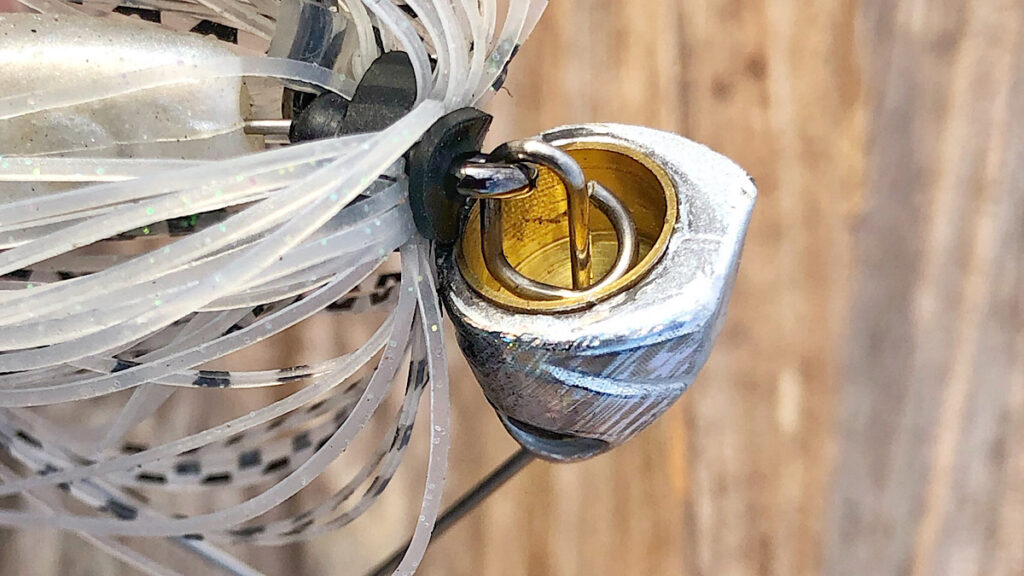 If you know anything about Freedom Tackle, they strive to rethink things. Sure, sometimes “if it ain’t broke, don’t fix it” should apply—but in their defense, no bait is really perfect as long as weak points, hangups, short strikes and lost fish persist. So in rethinking the spinnerbait, they decided to completely redesign the relationship between the bladed arm and the hook. With traditional spinnerbaits, there’s a wire harness that runs from the tip of the blade arm, up to form a bend and back down towards the head of the bait.

This wire is attached to a hook and when the lead or tungsten head is poured around this connection, you have a rigid point of contact between the blade arm and the hook. This gives off the impression of one continuous wire running from the blade arm, through the head of the bait and all the way to the hook point. Freedom Tackle chose to do away with this blueprint and instead created a hinged system where the blade arm meets the hook.

To do this, they molded a lead head onto the blade arm and created a recessed space within the head where a hook could be attached to a loop formed by the end of the arm of the spinnerbait. The intent is for this hinged point of contact to take a lot of the leverage away from a bass as it tries to pull free or jump and throw the bait during the fight. It’s a fact that the more leverage a bass has, the better its chances are of freeing itself. If you think about it, vibrating jigs have a similar hinge point that eliminates a lot of a fish’s leverage, resulting in an outstanding hookup to landing ratio. So this really is an ingenious idea to incorporate into a spinnerbait.