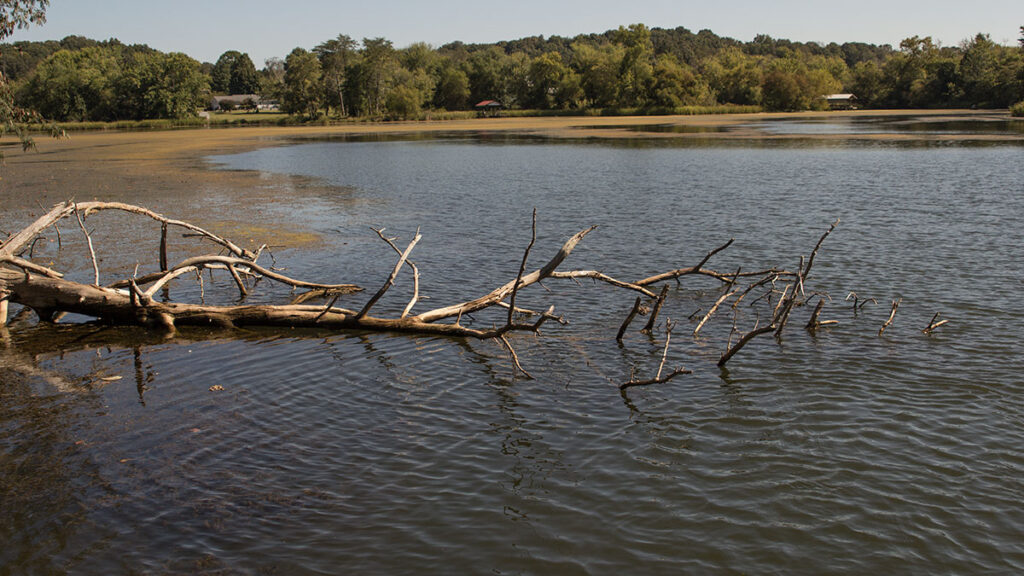 If you’re anything like me, it’s super tempting to run to the back of a pocket or up a skinny creek and start flipping good-looking wood for the entire day. While I’m a big believer that there are, in fact, resident fish that reside in these shallow-water areas, the numbers are finite, if that makes any sense. These kinds of areas don’t tend to replenish because the fish live their whole lives in these places; there’s not a steady stream of new inhabitants coming into town every week or month.

In an attempt to stop relying on this finite shallow-water population, I started targeting more main-lake laydowns for the past few years. I don’t think there’s much of a need to ride around into creeks and trudge around in that skinny water; I actually think some of the biggest fish in the lake tend to hang out underneath the ends of these main-lake laydowns. As I’ve discussed ad nauseam, these kinds of deep-water laydowns offer a lot of favorable situations for a bass. When those irritating summer storms pop up, they can kick their little ol’ tails a few times and scoot out to deeper water. Conversely, when it’s pretty and sunny outside, they can snug up right underneath the overhanging branchs and ambush prey as it passes by.

This might not sound like rocket science to some folks and I totally get that. But where I differ from the majority is how I actually fish these laydowns. I spent years and maybe decades flipping these main-lake laydowns with a Texas rig or a jig; sometimes I’d flip a 3/8-ounce weight to ‘em and other times I’d go with a 1/2-ounce weight. I honestly didn’t have much of a system. I just did whatever felt right.

While I would catch some fish doing this, several of which made me a lot of money, I still felt like I wasn’t getting the most I could out of these laydowns; they were just too sexy to only get one bite. There had to be more than one fish in there, right?

They ain’t always sitting on the bottom. We think they are. But they’re not.

Those suckers will get right underneath those limbs and it takes a pinpoint approach to fool ‘em into biting. They’re not dumb.

So I started messing around with suspending baits and topwater lures. I’m guilty of thinking that topwater frogs are only meant for skinny water and vegetation but I’ll bet my wallet right now that if you toss ‘em around these deep laydowns, ol’ Sally is going to eventually bust through that surface and scare the pants off of you. It’s a labor of love and takes a lot of patience, but it can result in some gigantic bites that will make your year.

For a quick story, I’ll tell you that I was doing this same thing a few years ago on a deep laydown; I was throwing a Zoom Fluke on some wimpy line and a wimpy reel. The water was pretty clear and I hooked a two-pound bass and started fighting it to the boat. After a few seconds, a shadow came out of the laydown and as sure as the day is long, a double-digit bass came out of the laydown and tried to eat the two-pounder I was fighting. I almost lost my breakfast but my fishing buddy saw it and we giggled for hours.