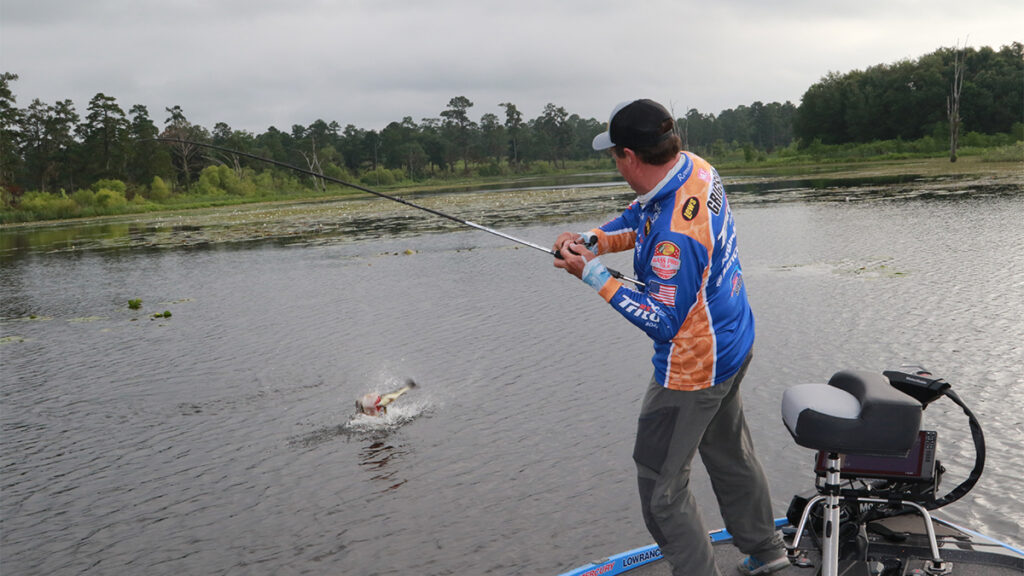 Basing his line choice on visibility, Grigsby said he’s typically going with 50-pound Seaguar TactX braid in off-colored water, but he’ll use fluorocarbon when visibility runs higher. 17- to 20-pound test is his standard range but when he has several feet of visibility, he may drop down as light as 15.

“In vegetation, the line is not as much of a concern because it’s bumping through that cover and the fish is bursting out to get it, rather than tracking it in open water,” Grigsby said. “I use the Lew’s skipping reel because it has a shallow spool that (minimizes) backlashes

“It only holds 40 yards of line, but most of your casts are that or less, so it doesn’t really affect anything you do. I just like never having to mess with the reel.”

Grigsby said he commonly uses the swim jig in tandem with a Strike King Thunder Cricket (vibrating jig). The latter excels in sparser cover and open water; often tickling the tops of grass beds and occasionally snapping it free from temporary snags to trigger bites.

The swim jig also delivers in those light cover scenarios and offers a strategic benefit. Just as bass get tired of rattling and/or wide wobbling crankbaits, too many bladed jigs peppering their world will find them tuning out the bolder look.

Switch over to the sleek, silent swim jig and the ones will a rumble in their belly, or a chip on their shoulder might be more inclined to open their mouth.